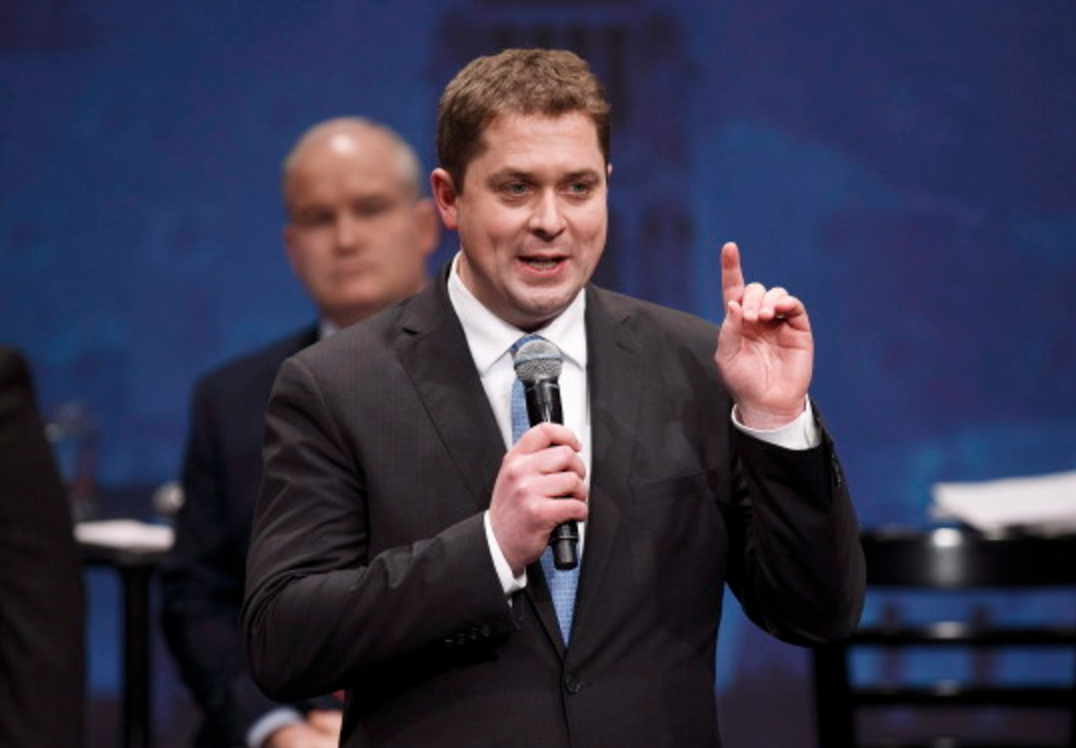 Saskatchewan MP Andrew Scheer snagged an unexpected victory in the race to replace Stephen Harper as leader of the Conservatives on Sat. May 27, 2017. Photo by The Canadian Press
Previous story
Next story

Stephen Harper’s new replacement may be able to unite a cleft Conservative Party, but that doesn’t mean the Tories will boast a ‘bigger tent’ for the next federal election.

According to political observers in Ottawa, a diverse set of party members may be willing to accept Andrew Scheer’s social conservatism in order to try defeating Justin Trudeau in 2019, but voting Canadians — particularly women and millennials — may not.

Scheer snagged an unexpected victory in the Conservative leadership race on Saturday from front-runner Maxime Bernier by a mere two per centage points. He won after trailing for 12 rounds of voting, branding himself as a candidate more likely to connect with Canadian’s who don't share Bernier’s libertarian policies.

Scheer, 38, has been MP for the Saskatchewan riding of Regina—Qu'Appelle since 2004. He opposes same-sex marriage and abortion. Despite a campaign pledge not to reopen these debates in Parliament, political commentator Bruce Anderson said the tactic may not be enough to convince young voters to switch parties, or even to keep young conservatives on side.

“It’s hard in a modern Canada where millennials are going to be a bigger part of the voting cohort in the next election to be a leader who says, ‘Look, I feel these things, but don’t think about them when you vote for me, because I’m not going to legislate them, think about these other things instead,’” Anderson told National Observer on Monday.

It’s too soon to tell what kind of leader Scheer will be, he added, but unless he is willing to reexamine same-sex marriage, climate change, and other issues that resonate with progressive voters, the Tories could be a united but “much smaller” party in 2019. Many voters tend to support a candidate who represents their values and whose qualities they admire, Anderson explained, in lieu of a candidate with a strong set of policies.

Canadians for Clean Prosperity, an organization that advocates market-based government policies to address environmental issues, gave Scheer a "D" in its evaluation of the new leader's environmental policies.

The group, which has several prominent conservative supporters, noted that Scheer supported the former Harper government's sector-by-sector approach to reducing greenhouse gas emissions, in cooperation with industry and the United States.

Newly-minted Conservative leader Andrew Scheer told reporters on May 27, 2017 in Toronto that it was important for him to defend free speech. Video by Riley Sparks

Staying away from the “cocktail circuit”

Scheer, the House of Commons speaker during the final few years of the Harper government, delivered his first post-victory address to the Conservative caucus on Monday morning. He portrayed the Liberals as arrogant elites and the Conservatives as the party of the grassroots.

“We’re the party of everyday Canadians who work hard, who make sacrifices to secure a better future for their kids. That’s who we are, that’s who we fight for — that’s never going to change,” he said.

"The Liberals can take their cues from the cocktail circuit. We will take ours from the minivans, from the soccer fields, from the legion halls and the grocery stores.”

Scheer promised to repeal the federal carbon tax if elected in 2019, recommit the Canadian airforce to fight Daesh (also known as ISIS), and balance the federal budget.

He quipped that with the departure of interim Conservative leader Rona Ambrose, he has “physically maybe not big, but very stylish shoes to fill” as leader of the Official Opposition, and hailed the efforts of the other 12 candidates who ran against him.

Scheer has a reputation on Parliament Hill as a friendly and approachable MP — even during the tense years leading to Harper’s exit from politics.

Duff Conacher, co-founder of Democracy Watch and an Ottawa-based political commentator, said Scheer is “more likeable and he’s funnier” than Harper, which could give him an edge against Trudeau in 2019. But his social conservative values will likely be a problem, given that 49 per cent of Conservative party members supported Bernier, a libertarian, and the most progressive candidate in the race, Michael Chong, finished in fifth place overall.

Only 15 per cent of voters supported social conservative candidates Brad Trost and Pierre Lemieux in the first round of voting on Saturday. Unlike Scheer, they wore their values on their sleeves during the race, said Conacher. That means there's more pressure on Scheer to appease Bernier's supporters, he explained, than there is is to appease social conservative voters.

“Kevin O’Leary and Maxime Bernier still have far more influence than the so-cons (social conservatives) because together, they won almost 50 per cent of the vote,” he told National Observer.

“… If (the Tories under Scheer) don’t do something Bernier wants, he won’t leave the party, but he can do a lot of damage to Scheer, more than the so-cons can.”

If the Tories are still divided, however, they gave no such indication on Monday morning. Conservative MPs walking into the caucus meeting said the party was united behind Scheer, including those who lost the leadership race.

"We’re a team," said Erin O’Toole, who finished in third place. "There’s victory when there’s unity, and I think every MP is united behind Andrew Scheer, who I think will contrast very nicely to Justin Trudeau — and we’ll see that this week.”

Michael Chong, who was a long-shot candidate to begin with, promised to keep pushing his often−unpopular ideas in caucus, namely his support for a carbon tax, but said he’s looking forward to working with Scheer on the hill.

"My track record shows that I’ve always been a loyal Conservative, but always somebody who is willing to fight for the ideas that I believe in," he told reporters. "It’s a big−tent Conservative party with a diversity of views.

"You saw that on the floor of the convention in the way the vote broke out, so I’m looking forward to working with the new leader.”

Meantime, the governing Liberals launched their first attack on the newly-minted Scheer, branding him as "deeply out of touch with Canadians," and promoting a "divisive agenda" that serves the wealthiest one per cent. In a fundraising email released Saturday evening, Braeden Caley, senior director of communications for the party, told email subscribers:

"He has opposed equal marriage and a woman's right to choose, and has no plan to grow the economy or support Canada's middle class.... Andrew Scheer has worked alongside Stephen Harper to oppose real change every step of the way, and his plan would double down on the same failed policies that saw the middle class fall behind during the Harper decade."

But in response to leading questions from reporters about Scheer's position on abortion rights, Heritage Minister Mélanie Joly said the Trudeau government clearly supported a woman's right to choose and would be amending the Criminal Code to remove the section criminalizing abortion. Joly and Health Minister Jane Philpott also both congratulated Scheer, and wished him the best in his service to Canadians.

"I think it’s early days for their leadership, and their policy platform no doubt will be developed based on input from a variety of sources, so we look forward to the very best," Philpott said on Monday. "Our party’s fundamental commitments remain unchanged, that we know that women need to have access to all human reproductive services, and that we fundamentally support a woman’s right to choose, and we’ll continue to do so."

— with files from The Canadian Press and Riley Sparks