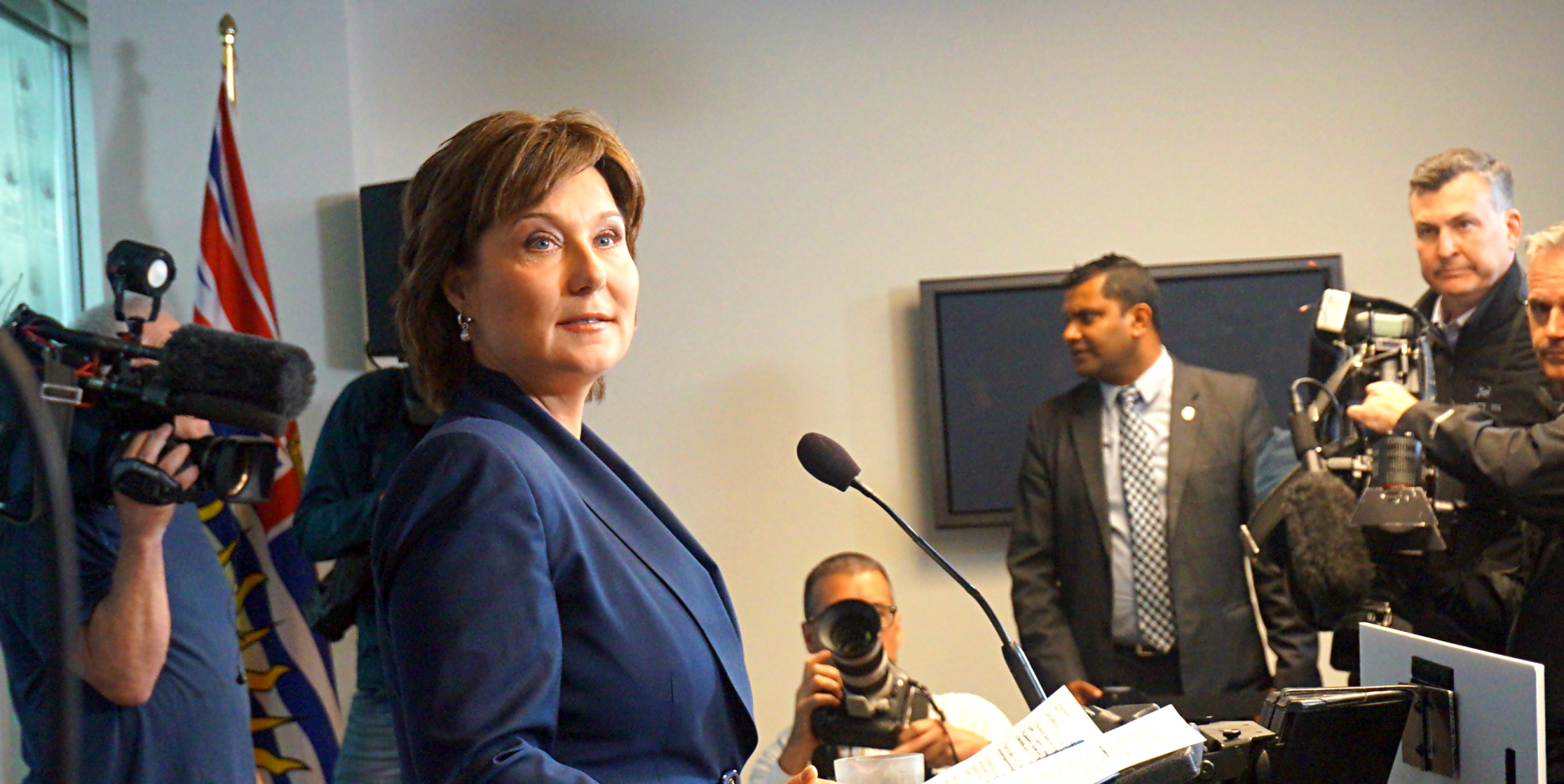 B.C. Premier Christy Clark says she'd be happy to serve as leader of the Official Opposition in B.C. during a press conference in Vancouver on Tues. May 30, 2017. Photo by Jenny Uechi
Previous story
Next story

Despite an historic agreement between the BC NDP and BC Green Party to seize power in British Columbia, incumbent Premier Christy Clark says she's not ready to back down.

At a press conference on Tuesday, she told reporters that she would be happy to take on "any jobs that the voters give me," including assuming the role of leader of the Official Opposition. She declined to directly answer reporter questions on her intentions to resign.

"I’m more than ready and willing to take that job on," she said in Vancouver. "What’s most important is this basic principle — if there is going to be a transfer of power in this province, and it certainly seems like there will be, it shouldn't happen behind closed doors."

Clark said she will recall the legislature in June and attempt to obtain the confidence of the house after consultation with constitutional experts. It was her first public appearance since Monday afternoon, when BC NDP leader John Horgan and BC Green Party leader Andrew Weaver announced an alliance to replace Clark's Liberal administration.

Her party won a minority of seats in the provincial election on May 9, and together, the 41 New Democrat and three Green MLAs form a majority voting block over the 43 Liberal members of the legislature.

Clark acknowledged that it "seems likely" her government will fail the test of confidence in the house. When asked where she felt she went wrong during her six years in power, she gave a testy answer to reporters:

"It's your job to sit around and figure out what went wrong, I'll let you do that," she said. "It's my job to make sure that we look forward and go out and fight for the interests of British Columbians, listen to what we heard in the election and reflect that.

After the election, her party attempted to negotiated with the BC Green Party, which held the balance of power in the legislature. On Tuesday, Clark characterized those negotiations as "unsuccessful."

She did not sit in on the negotiations herself, she told reporters, but was in "regular contact" with the Green Party.

Following Clark's media comments, the BC Greens and BC NDP released a joint press release containing additional details on their plan to remove Clark from her position as premier. They pledged to work together to support a stable New Democrat government, on the condition that the BC NDP support several key policy initiatives identified by the Greens.

"The results of the election clearly demonstrated that voters wanted to put an end to the bitter, divisive and cynical politics of the past, and get on with productive governance," said BC Green Party leader Andrew Weaver in a statement. "Today, I am very proud to stand with John Horgan and our respective caucuses to demonstrate how two distinct parties can work together for the good of all."

"The people of B.C. spoke loud and clear on election day — they want a... government that works for them, not just those at the top," John Horgan, leader of the BC NDP, added. "With the signing of this historic agreement, we are showing that we are ready to roll up our sleeves and work together to make lives better for British Columbians."

The BC Liberals have held power in the province for the last 16 years.

Kinder Morgan admits its pipeline may be doomed

"if there is going to be a

I am so glad I was wrong

I am so glad I was wrong about Weaver. He has truly impressed me and many around me. Hope they can prevent the Liberals from doing too much shredding. It is only fair that the new government get a real good look at the shenanigans Clark is so good at.