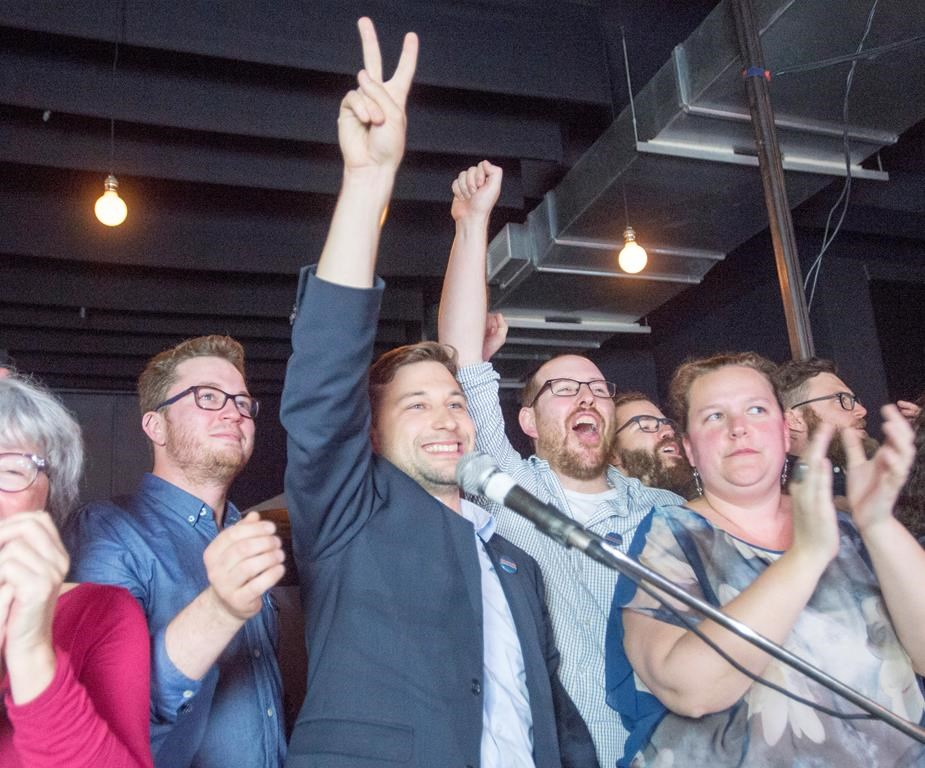 Quebec Solidaire candidate Gabriel Nadeau-Dubois, centre, reacts after winning the provincial byelection in the Montreal riding of Gouin on Monday, May 29, 2017. Photo by The Canadian Press/Ryan Remiorz
Previous story
Next story

Former Quebec student leader Gabriel Nadeau-Dubois strolled to victory for Quebec solidaire in a provincial byelection in the Montreal riding of Gouin on Monday.

Nadeau-Dubois, 26, dominated the field, capturing just more than 69 per cent of the popular vote to cement the win in the riding where he'd been heavily favoured.

He was up against 13 candidates to replace Francoise David, a Quebec solidaire member who resigned her seat in January, citing fatigue.

Parti Quebecois leader Jean-Francois Lisee chose not to run a candidate in the riding in order to ensure the seat remained with Quebec solidaire.

The move was part of an ill-fated attempt to create an electoral alliance between the PQ and the other, smaller sovereigntist party.

Lisee wanted to create a pact where the two parties would run one candidate in select ridings in order to increase the chances the Liberals would be booted from office.

The alliance crumbled, however, after members of Quebec solidaire largely rejected the deal at the party's convention earlier in May.

"It was the subject of the week so we heard a little bit about it on the ground," Nadeau-Dubois said Monday night of the PQ rejection.

"But I think the result tonight could not be clearer: There is a real deep support for Quebec solidaire in Gouin."

Party has no leader

Quebec solidaire, which describes itself as a progressive, sovereigntist party, has no leader.

Instead, the party is represented by one male and one female spokesperson.

He became a household name in the province after his stint as spokesman for the student strike movement in 2012.

Nadeau-Dubois, who celebrates a birthday on Wednesday, said he worries his new job will mean limited time for family and friends.

"My life just changed radically, but I have a wonderful team that was around me during that election and that is around me since 2012 now, and I know those people will be there for me to help me go through this new stage in my life," he said.

Gouin had long been considered a PQ stronghold before that, with the last Liberal victory coming in 1973.

Following Monday's results, the governing Liberals have 69 of the 125 seats in the legislature, compared with 28 for the PQ, 20 for the Coalition for Quebec's Future and three for Quebec solidaire.

There are five Independent members and one vacant seat.

— with files from Vicky Fragasso-Marquis in Montreal.

Quebecers head to polls for byelection in Montreal riding of Gouin