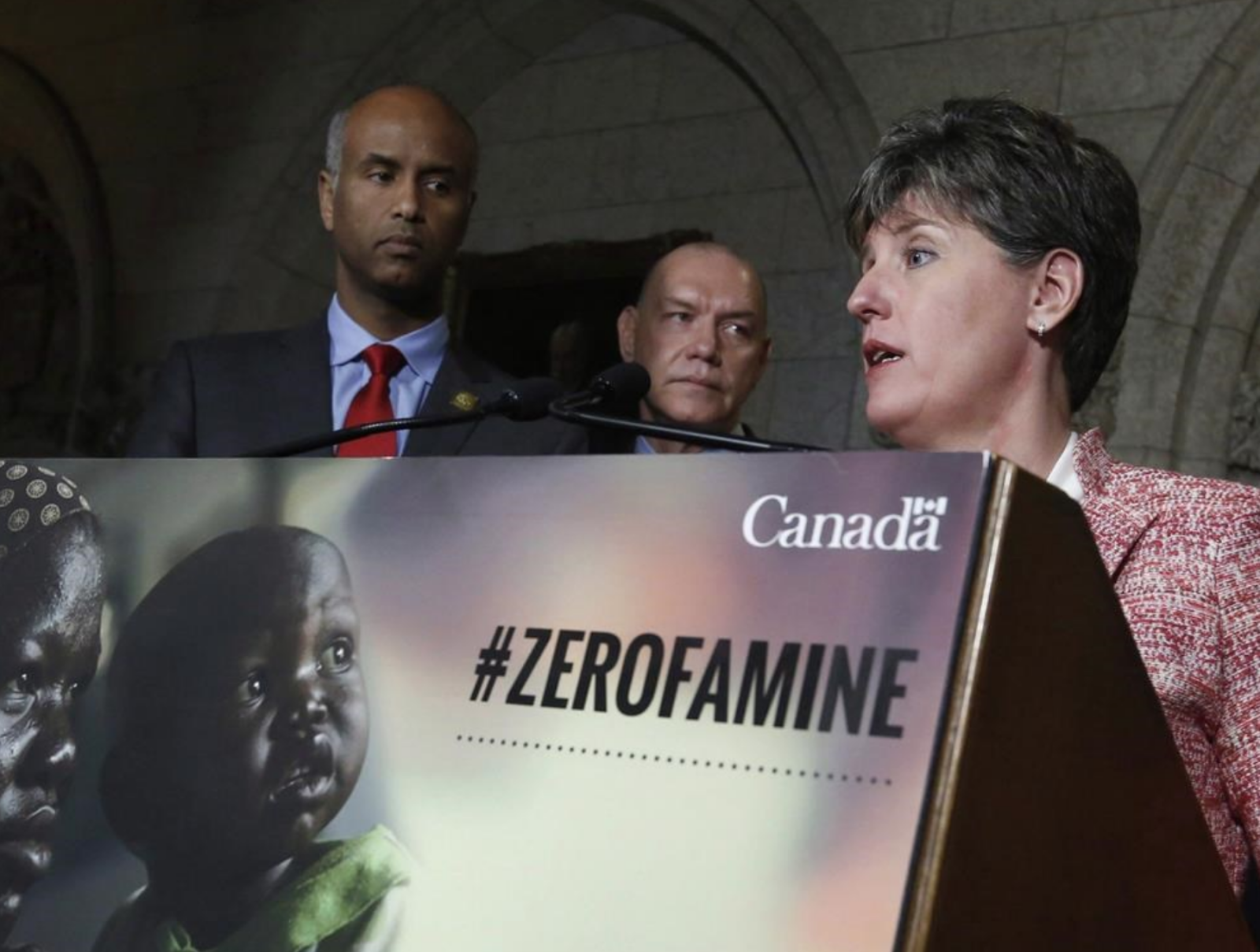 International Development Minister Marie-Claude Bibeau and Immigration Minister Ahmed Hussen address famine in Africa and the Middle East during a press conference on Parliament Hill, May 29, 2017. Photo by The Canadian Press
Previous story

Famine−ravaged countries in Africa and the Middle East will breed and spread terrorism if the world can’t help feed their people and give them hope, says Canada’s international development minister.

Canadians may want to do the compassionate thing and help ease the suffering of 20 million people in four countries — Nigeria, South Sudan, Yemen and Somalia, Marie−Claude Bibeau says.

But if altruism isn’t a good enough motivator, then cold, hard, national security interests are another good reason, she says. Bibeau offered that analysis in an interview as she launched the government’s matching fund for famine relief in those four countries.

"We have to contribute to do our part in these countries because, yes, we are generous and we want to do that to help the most vulnerable." she said. "But there is an issue of global security also."

Bibeau said the government will match donations made to registered charities over the period of March 17 to June 30.

Standing in the foyer of the House of Commons on Monday, surrounded by members of international organizations, Bibeau and others appealed to the collective conscience of Canadians to help provide water, sanitation services, shelter and urgent food assistance to huge civilian populations, including women and children.

But in the interview, Bibeau discussed the need to create longer−term "winning conditions," especially for youth, to keep them out of the ranks of terror groups operating in or near the affected countries.

"They want to have hope that they will be able to study, find a good job, have a good life," she said. "If they don’t have hope, there comes a time when they turn to armed groups, because it’s the only way for them to get revenue."

There is no shortage of options for young people looking to turn to a militia in the four countries that are the subject of the Canadian fundraising appeal.

Branches of the Islamic state group and al−Qaida are active in Yemen, where a Saudi Arabian−Iran proxy civil war is raging. The Boko Haram group, which has abducted schoolgirls and razed villages, remains a threat in Nigeria.

Armed factions in South Sudan have been waging a civil war since December 2013, plunging the country into famine in February.

Somalia meanwhile is the failed state home to the al−Shabab terrorist group.

The other alternative that young people have, said Bibeau, is to simply flee — joining the record number of refugees flowing from Africa towards Europe across the Mediterranean, further exacerbating the world’s migration crisis.

Bibeau said she is very conscious that the situation in three of the countries in question — Nigeria, South Sudan and Yemen — "these famines are man−made. They are caused mainly by conflict.

"In Somalia, it’s mostly related to climate change and to drought."

She said the situations demand larger, longer−term solutions that involve diplomacy and getting climate change under control.

Bibeau won’t say whether it is inevitable that a Canadian peacekeeping mission will end up in Africa. The Liberal government still hasn’t decided where to deploy hundreds of peacekeepers, but it may offer some clues when it releases its long−delayed defence policy review next week.

Bibeau says her own delayed development review will be made public by the end of June.

With Canada hosting the G7 summit next year, she’s well aware of the pressure the country will face to boost overall aid spending, something it failed to do in the most recent budget and for which it was criticized by the international aid community.

Bibeau said she is fighting hard at the cabinet table over a finite pot of funds.

"I feel I have the support of my colleagues. We have hard decisions to make," she said.

The government has invested heavily at home on indigenous people and a new affordable housing, Bibeau said.

"I know it’s not good enough. We have to do always more on the international stage, but it’s still important."