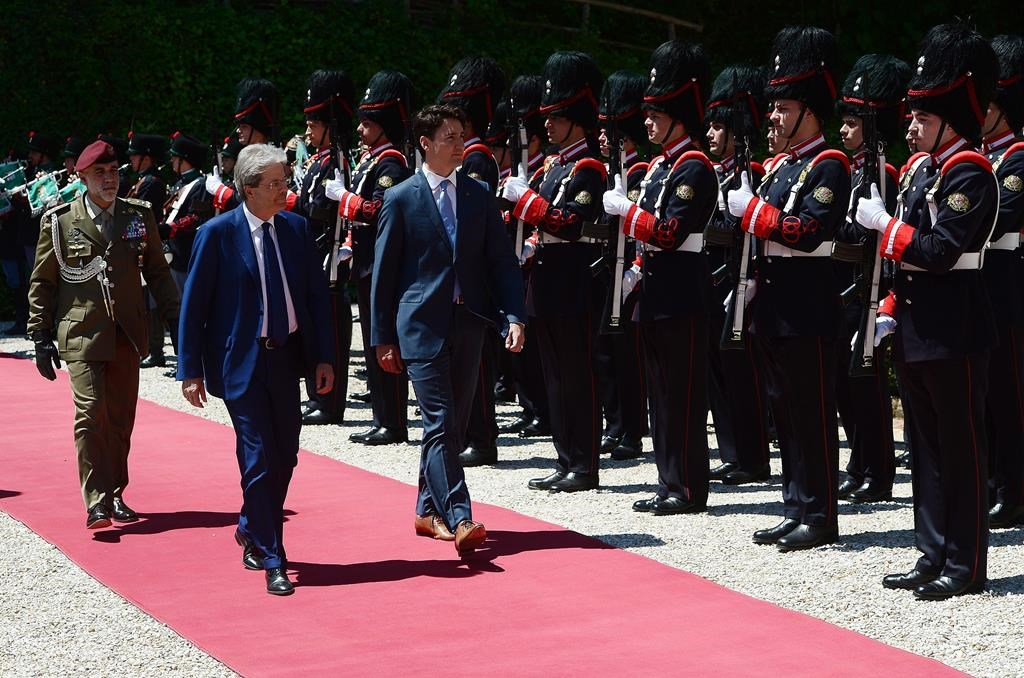 Prime Minister Justin Trudeau walks with Italian Prime Minister Paolo Gentiloni during a visit to Rome on May 30, 2017. Photo by The Canadian Press
Previous story
Next story

Prime Minister Justin Trudeau is standing by the Kinder Morgan pipeline project, even as the New Democrats and Greens in B.C. are teaming up to fight it.

"The decision we took on the Trans Mountain pipeline was based on facts and evidence on what is in the best interests of Canadians and indeed, all of Canada," Trudeau said Tuesday in Rome, where he held a joint news conference with Italian Prime Minister Paolo Gentiloni.

"Regardless of the change in government in British Columbia or anywhere, the facts and evidence do not change," he said.

Trudeau said his Liberal government understands that growing a strong economy requires taking leadership on both the environment and the economy.

"That is what drives us in the choices we make," he said. "We stand by those choices."

His comments come as the anti−pipeline Green Party and NDP in British Columbia announced Monday they’ve come to an agreement that could cast doubt on the project’s future.

The leaders of the two parties say they’ve reached a deal that could see the formation of a minority NDP government in the province.

Both have voiced their opposition to the Trans Mountain expansion, which would see the pipeline running from Edmonton to Burnaby nearly triple its capacity.

Kinder Morgan is expected to proceed Tuesday with its initial public offering for the expansion. Trudeau also praised the benefits that international trade can bring to a world where people are anxious about the future.

In a speech to Italian parliamentarians in Rome today, Trudeau held up the trade deal between Canada and the European Union as an example of an agreement that can both create new jobs and ensure more people can benefit from economic growth.

"We are proud of it, and you should be, too," Trudeau said Tuesday in his address to 45 parliamentarians and other dignitaries in the Sala della Regina, or the Queen’s Room, a majestic committee room at the Chamber of Deputies in the Italian Parliament.

"It will create the kind of growth that benefits all our citizens, not just our wealthiest," Trudeau said.

The trade agreement, known as CETA, is now being considered by the Senate.

Trudeau thanked the Italian parliamentarians who supported the deal, and said it would not have been possible without the support of "like−minded" leaders like Italian Prime Minister Paolo Gentiloni, with whom he is also meeting today.

International Trade Minister Francois−Philippe Champagne says the Liberal government hopes to bring other countries onside with trade by making it "real" for people.

Trudeau is in Italy to promote trade and cultural ties between the two countries at the end of a trip to Europe that included the NATO meeting in Brussels, the G7 Summit in Sicily and a private audience with Pope Francis at the Vatican.

On Tuesday, Trudeau was introduced with glowing remarks by Laura Boldrini, president of the Chamber of Deputies, noting his efforts at fighting climate change.

Speaking in Italian, she said that this issue cannot be solved with simplistic solutions within the confines of a single country.

"The biggest challenge can’t be tackled alone," she said.

Pietro Grasso, president of the Senate, expressed concern over the "isolationism and protectionist sentiment" that was heard at the G7 summit.

Trudeau addressed the anxiety that people around the world are facing as "the twin forces of technology and globalization" that are changing everything, and quickly.

But he argued that this can bring solutions to problems like climate change.

"All these things are possible if we shape the great forces of change to deliver progress for people," Trudeau said. "That’s what progressive leadership does in moments like this."

"Leaders who think we can hide from these changes, or turn back the clock, are wrong," he said. "It’s our responsibility to harness these changes and make them work for people."