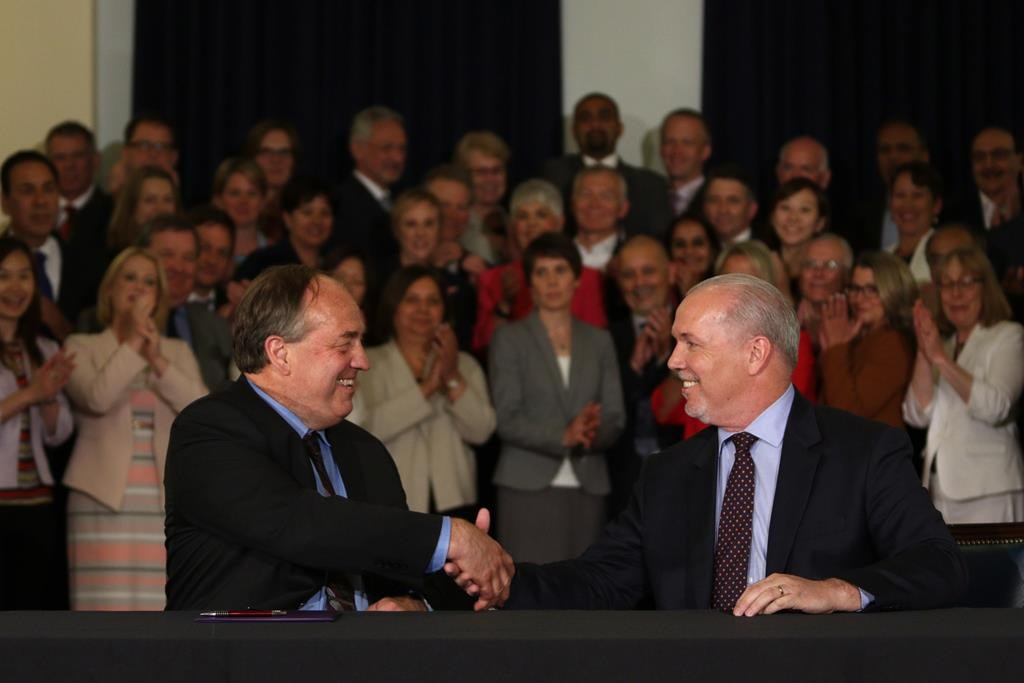 NDP leader John Horgan and Green party leader Andrew Weaver shake hands after signing an agreement on creating a stable minority government in the Hall of Honour at Legislature in Victoria, B.C., on May 30, 2017. File photo by The Canadian Press
Previous story
Next story

Some business leaders in Canada expressed concerns Wednesday that the fallout from British Columbia's election is discouraging the private sector from investing in the province.

Promises by B.C.'s NDP and Greens to hike the minimum wage and carbon tax could further jangle investor nerves after both parties also committed to immediately stopping the Trans Mountain pipeline expansion project.

"The election outcome, and the vow of the Green-NDP alliance to obstruct that pipeline, sends a very worrying message to investors about Canada as a predictable, reliable place to invest," said Gary Leach, president of the Explorers and Producers Association of Canada.

He said the anti-pipeline resolution affects not only the oil and gas sector, but the overall investment climate.

"It's a destabilizing event for investor confidence in Canada generally, and we've been struggling with that."

Kinder Morgan Canada president Ian Anderson, however, said in a statement Wednesday that the company continues to move forward with the project despite comments from the B.C. Greens and NDP, and is awarding major contracts ahead of the expected September start date.

"Trans Mountain has followed every process and met every test put before us," Anderson said. "With financing in place and a final investment decision, we are starting to award significant contracts and are moving ahead with the benefit agreements we have in place."

On Tuesday, the NDP and Greens formalized their alliance in a four-year agreement that commits to raising minimum wage to at least $15, increasing the province's $30 carbon tax by $5 per tonne annually beginning next April, and launching a review of labour laws.

Richard Truscott, vice-president of Alberta and B.C. for the Canadian Federation of Independent Business says while the parties have made some good proposals, several will be a burden to business.

"When governments seem to go out of their way to making operating a small business less affordable and more challenging, that is certainly not good news," Truscott said. "It's not just the one policy that concerns us. It's the build up of everything they're proposing to do."

The agreement also calls for the referral of the Site C hydro dam project to the B.C. Utilities Commission to determine economic viability, which Raymond James analyst Frederic Bastien noted could put major contracts with construction and services providers at risk.

"The formation of a Green/NDP coalition in B.C. could put future large-scale construction projects in the province at risk and lead to an overall state of uncertainty that would not be good for companies with exposure to the region," Bastien said.

B.C. NDP leader John Horgan said in announcing the agreement with the Greens that the policies will make life more affordable and addresses issues that matter to British Columbians.

Matt Toner, a deputy leader of the Green party, said the policies are part of a transition to a more sustainable economy, but that they'll be consulting with business and not making overnight changes.

He said some of the business community concerns could be more of a knee-jerk reaction to the first change in government in 16 years, but he also made clear his vision of a low-carbon economy.

"When it comes down to things like the fossil fuel industry, we just have to have the conversation about how do we keep those resources in the ground," Toner said.

He said fossil fuels will still be needed in the short-term, but to meet climate change commitments there needs to be a significant shift away from them.

"If you look at where we see the future going, we think we have to start making profound changes in the structure of our economy," Toner said.

I can understand the

I can understand the trepidation in business leaders who have been able to run amok for years with Christie. Yet, democracy is suppose to represent the citizens, not just corporate citizens. For the first time in BC we have the chance of our government representing everyday citizens. Citizens who need an increase in basic wages. Companies will just pass it on to purchasers so their complaining is a tad silly. Climate Change is galloping ahead while most political leaders dither about how to keep the fossil fuel industry happy, ignoring the calamity of their actions for current and future citizens. I am curious which planet they think their children will live on, as their money will not insulate their offspring from the woes of climate change.
With the callous indifference business leaders have shown to everyday citizens and the impact of their actions on society and this earth, I can appreciate their nervousness. Go where you are wanted, and it is not in BC. For every investor in the old economy who doesn't want to invest in BC there will probably be 2 or 3 who want to invest in a climate that supports their type of businesses. Usually naysayers only give 1/2 or less of the whole picture. I think that is what is occurring with these doom and gloom predictions.