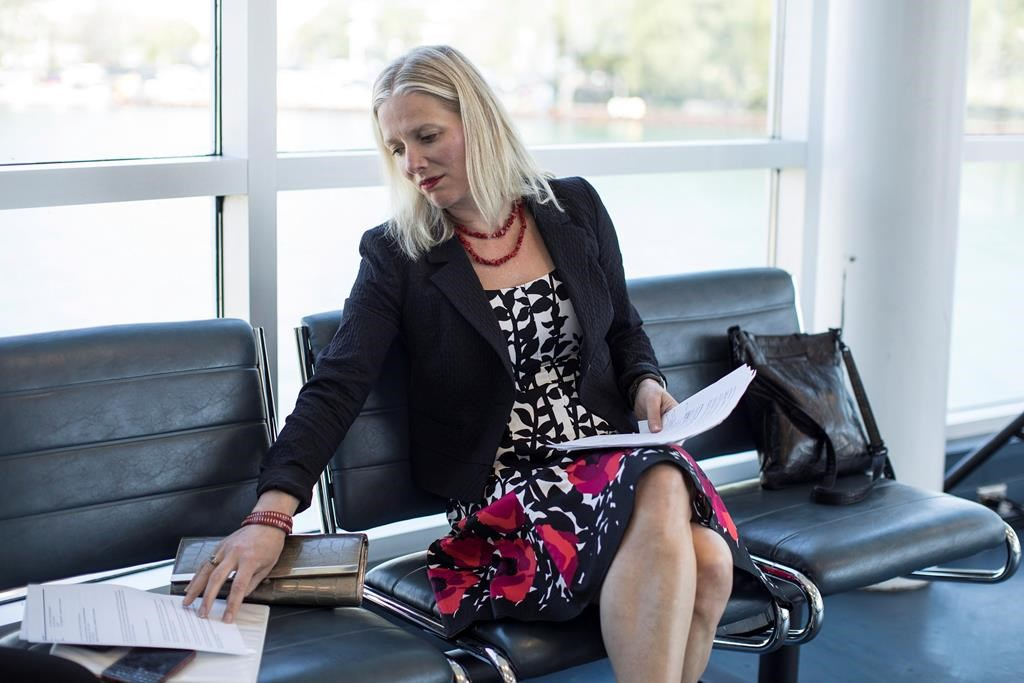 Environment Minister Catherine McKenna reads her notes before delivering a policy announcement in Toronto on Wednesday May 31 , 2017. Photo by The Canadian Press/Chris Young
Previous story
Next story

As the U.S. flirts with fleeing the Paris climate-change accord, Canada is aligning itself with the world's other two largest economies to take a global leadership role on the effort to limit greenhouse gas emissions.

Environment Minister Catherine McKenna would only say Wednesday that Canada remains committed to the Paris Accord, refusing to speculate about U.S. President Donald Trump's musings about withdrawing from the agreement.

"Canada's just going to keep marching on, like the rest of the world," McKenna told an event in Toronto.

Trump has said climate change is a "hoax" and campaigned on a promise to withdraw from the Paris agreement. He has apparently been pondering what to do about that promise since the November election.

On Wednesday, a White House official said Trump is indeed expected to withdraw the U.S. from the accord, but may use "caveats in the language" when the time comes — leaving open the possibility that the decision isn't final.

The official insisted on anonymity in order to discuss the decision before the official announcement.

"I will be announcing my decision on the Paris Accord over the next few days," Trump tweeted Wednesday amid media reports that a withdrawal was looming.

McKenna has said what the U.S. chooses to do is up to the U.S., but Canada won't wait.

It very likely will take place in Canada, around the same time as the United Nations General Assembly, which starts in New York City on Sept. 12.

Currently the U.S. is not part of that group.

"Canada is going to show leadership with China and the EU and we certainly hope the U.S. will be joining us," McKenna told The Canadian Press in a recent interview.

Canada's emissions amount to about 1.6 per cent of global greenhouse gases.

The Paris agreement was reached in December 2015 to reduce emissions, adapt to climate change and pay for mitigation measures. All 195 members of the United Nations Framework Convention on Climate Change signed the agreement; of those, 147 — including Canada — have ratified it. The agreement came into effect in November 2016.

U.S. and Russia would be allied

Withdrawing from Paris would leave the U.S. aligned only with Russia among the world's industrialized economies in rejecting action to combat climate change.

During Trump's overseas trip last week, other G7 leaders including Prime Minister Justin Trudeau pressed him to keep the U.S. in the pact. German Chancellor Angela Merkel did little to contain her frustration at the American position.

McKenna told the Canadian Press the rest of the world doesn't intend to sit and wait for Trump.

"I think there is a general sense that it would be better for the U.S. to be part of the discussions and to be at the table, but that's a decision for the United States to make," she said.

"Many times I've made the argument that climate action actually creates jobs and creates growth, which is what the United States want, what Canada wants — it's what every country wants.

"They're going to make their own decision, but we all need to be moving forward."

Everyone else on board

McKenna said it was clear to her in Berlin that everyone else at the table is on board.

"That's what I've seen pretty loud and clear that this is a situation where countries get it and they're going to move forward on climate action."

Aims of the Paris agreement include keeping the average global increase in temperature to below 2 degrees Celsius above pre-industrial levels and mitigating against the impacts of climate change.

Canada's commitments under the agreement are to reduce annual emissions to 30 per cent less than they were in 2005 by 2030.