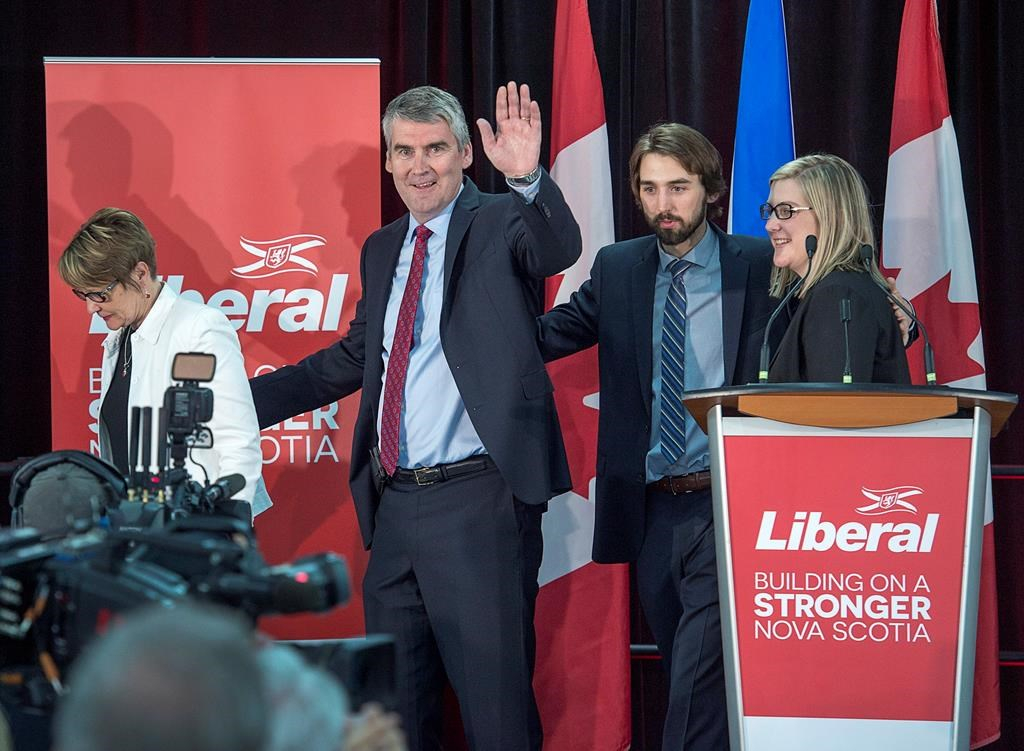 Nova Scotia Premier Stephen McNeil waves as he heads from the stage with his wife Andrea, daughter Colleen and son Jeffrey after addressing supporters at his election night celebration in Bridgetown, N.S. on May 30, 2017. Photo by The Canadian Press
Previous story

Nearly six hours after the polls closed, the Liberals won 27 seats, enough for a majority in the 51-seat house of assembly. An informal tally suggested more than 15 women will sit in the legislature, a new record.

The Progressive Conservatives, led by Jamie Baillie, won 17 ridings, and the NDP were elected in seven.

The Liberal win came at a cost for McNeil, whose party lost seven seats including those held by cabinet ministers Joanne Bernard and Michel Samson.

Access to health care dominated debate during the latter half of the 30-day campaign, and McNeil said he learned from the electorate that changes are needed.

"I want to assure you that I've heard you, and I've listened," the former appliance repairman said from his campaign headquarters inside a curling rink in Bridgetown. "We have a plan, and the opposition parties have a plan, and we can work together to make it better."

He pledged to recruit more doctors, expand health services and address wait times for hip and knee replacements, particularly in Cape Breton, where at least three Liberals went down to defeat — including a high-profile cabinet minister.

Baillie said voters made it clear they are not happy with McNeil's leadership.

"The Liberals are the ones who have lost the most tonight," he told party supporters in Springhill, N.S.

The Tory leader, a chartered accountant who served as CEO of Credit Union Atlantic before becoming party leader in 2010, said the Liberals' spring budget — tabled last month but not passed — had to include more for health care and mental health.

Baillie, who led the Tories into an election for a second time, confirmed he would continue to lead the party.

"We won seats in all parts of this province. Cape Breton has come through big time. We're winning seats all over the mainland and now we're winning seats in Halifax region again," said Baillie. "I think that's a good sign for our party."

NDP Leader Gary Burrill, a United Church minister who was elected leader just over a year ago without a seat and won his bid for the Halifax Chebucto riding Tuesday, agreed the dominant issue at the doorstep was the ailing health care system.

"People will speak of the inability to find a doctor or people will speak of going to the emergency and finding it closed or having a family member being treated in the hallway or next to an ice machine," he said in an interview at a downtown Halifax hotel as the final results were tallied.

"A competent government will recognize it's a health-care crisis and respond to it as a government does to a crisis among its people."

But the party appeared to stumble in the latter half of the campaign as Baillie repeatedly complained about doctor shortages, emergency room closures and a lack of mental-heath services.

For his part, McNeil told voters that his penny-pinching approach to public spending enabled his government to offer voters $1-billion in spending commitments and tax cuts over four years.

McNeil, whose Liberals won a majority in 2013, told voters the new spending would not have been possible were it not for his determination to rein in wage increases within the public sector.

However, that commitment led to ugly standoffs with the province's health-care workers and public school teachers. There were protests at the legislature, two brief strikes and back-to-work legislation that the unions condemned as draconian.

But the labour strife did not appear to make much of a dent in the Liberal brand.

At dissolution, the Liberals held 34 seats in the 51-seat legislature, the Progressive Conservatives had 10 and the NDP five. There was one Independent and one seat was vacant.

Throughout the race, Baillie said voters had told him there was a crisis in the health-care system, and he accused McNeil of ignoring the issue.

In particular, Baillie made a point of telling voters McNeil had failed to deliver on a 2013 promise to make sure every Nova Scotian had access to a family physician. Almost four years after the premier made that pledge, about 100,000 Nova Scotians are still looking for a doctor.

McNeil said his government's decision to reduce the number of health care authorities to only one would lead to more investment in front-line care. And he said he would improve access to primary care by creating 70 collaborative care clinics, spending $25 million to hire doctors and specialists and expanding tuition relief for medical professionals.

Voter turnout in Nova Scotia slumped to an all-time low on Tuesday, with less than 54 per cent of eligible voters casting ballots in the provincial election.

Of the 748,633 registered electors in the province, only 400,898 cast a ballot in a tight race that saw Liberal Premier Stephen McNeil nab a second consecutive majority government.

The urban riding of Halifax Citadel-Sable Island recorded one of the lowest voter turnouts on record, with just over 40 per cent of electors registering a vote.

Cape Breton-Richmond, an electoral district on the southwestern side of the island, had the biggest turnout of voters vying to elect the members to the 63rd general assembly with nearly 70 per cent of voters casting a ballot.

Elections Nova Scotia spokesman Andy LeBlanc says the low turnout was a disappointing departure from the strong early voting turnout, in which 112,900 voters cast their ballots at advanced polls.

He says it's the lowest voter turnout since 1960 and likely the lowest turnout of registered electors since the first Nova Scotia general election in 1867.