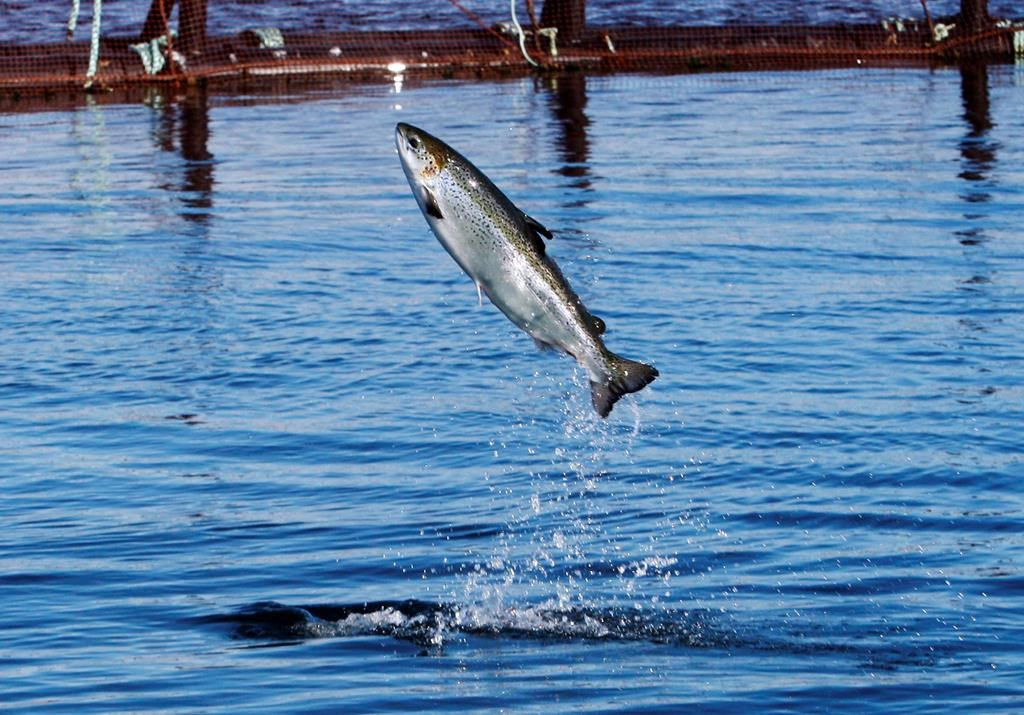 An Atlantic salmon leaps while swimming inside a farm pen near Eastport, Maine, Sunday, Oct. 12, 2008, in Eastport, Maine. File photo by the Associated Press/Robert F. Bukaty
Previous story
Next story

The Atlantic Salmon Federation is urging Ottawa to take a more "aggressive" approach with Greenland — where salmon migrate from Canada and are harvested — as returns continue to decline.

A federation report released Thursday said 2016 returns for North American Atlantic salmon were 27 per cent lower than the previous year, and may indicate further declines in 2017. The population estimates were based on data from Canada, the U.S., and Greenland.

The report said grilse — Atlantic salmon that return to spawn after only one year at sea — saw the greatest decrease: 31 per cent lower than 2015.

Salmon stocks migrate north from Canadian rivers to feeding grounds off the Arctic country, where 27 tonnes of salmon were harvested last year, down significantly from 56 tonnes in 2015.

"We need to take a much more stronger, aggressive approach with Greenland," said Taylor ahead of a meeting next week of the North Atlantic Salmon Conservation Organization — an intergovernmental organization that includes Canada, the U.S., Denmark, the European Union, Norway and Russia.

"We have to figure out a way to get that Greenland commercial fishery to the lowest level possible."

The federal Fisheries Department said in email that it will continue to push Greenland to more to help support conservation of salmon.

Taylor said although most of the salmon in Greenland's waters migrate from Canada, international laws stipulate the Arctic country can harvest those salmon. Greenland's quota for this year is set at 45 tonnes.

But he said Canada and other NASCO members could take a stronger position with Greenland, and that Ottawa should "think outside the box."

"Perhaps there are quotas — shrimp quotas, halibut quotas — that Canada shares with Greenland up in the northern part of the North Atlantic that could be exchanged ... for giving up part of their salmon catch," Taylor suggested.

But the federation is also urging Canadian anglers and First Nations groups to exercise caution by releasing the fish alive or allowing more fish to pass upriver. Those two groups harvested about 135 tonnes of Atlantic salmon in 2016, it said.

"We have to practice what we preach. We have to lead by example," said Taylor. "Canadians have to stop killing so many fish ... If we expect the Greenlanders to cut back, we better kill fewer fish."

Taylor also noted fishermen in coastal Labrador and St-Pierre and Miquelon — a French archipelago south of Newfoundland — are intercepting and harvesting salmon as they return to North American rivers. The federation is urging those regions to limit their harvest.

In the United States, Atlantic salmon numbers remain critically low, the federation said. It said a total of 636 Atlantic salmon — protected by the U.S. Endangered Species Act — were counted in all American rivers last year. Angling is completely closed.

"Rivers in eastern Cape Breton, the Atlantic coast of Nova Scotia and the Bay of Fundy fared better on average than the United States, but extirpation remains a possibility if aggressive conservation and recovery actions are not taken to reverse the decline," a release from the federation said.

By Elizabeth McSheffrey | News | May 2nd 2017
Race Against Climate Change