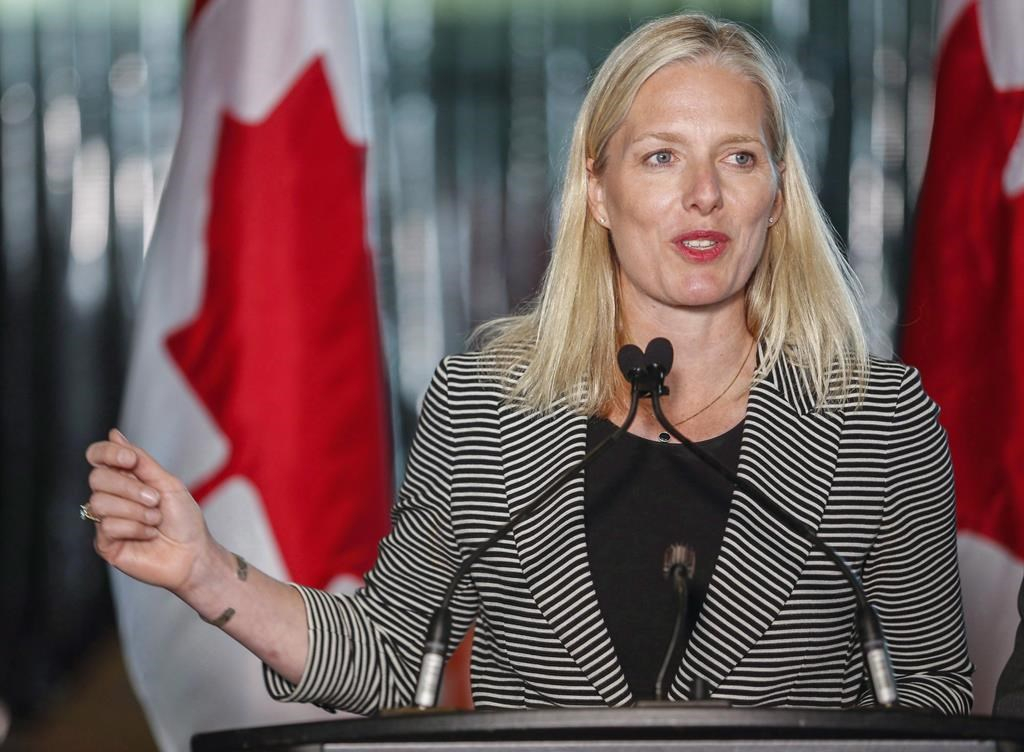 Environment minister Catherine McKenna speaks at an announcement regarding the Pan-Canadian Framework on Clean Growth and Climate Change in Calgary, Alta., Thursday, May 25, 2017. File photo by the Canadian Press/Jeff McIntosh
Previous story
Next story

President Donald Trump's decision to pull out of the Paris climate-change agreement is disappointing, but the world is marching inexorably towards a greener future with or without the United States, says Canada's environment minister.

Catherine McKenna was responding to news that the U.S. is pulling out of the landmark 190-country agreement to reduce greenhouse gas emissions, although the president says the U.S. is willing to try to negotiate its re-entry, under better terms.

She called Trump's Rose Garden announcement "deeply disappointing," but suggested the president is costing the U.S. a golden opportunity to profit from the inevitable growth of clean-tech initiatives around the globe.

"The clean-growth economy is where the world is going and Canada is going to be part of it," McKenna said on Parliament Hill following Thursday's White House news conference.

"Canada wants to create good jobs, and wants to grow our economy and create opportunities for business. We want to be there, we want to be providing solutions for the world. We know where we're going."

Trump framed his decision as reasserting American sovereignty, saying, "I was elected to represent the citizens of Pittsburgh, not Paris."

He said the U.S. would "cease all implementation" of the accord, under which his predecessor Barack Obama had voluntarily agreed to reduce emissions by about 1.45 billion tonnes by 2025.

Trump said that he would begin negotiations to re-enter the agreement or establish "an entirely new transaction" to get a better deal for the U.S. But re-entry was hardly a priority, he suggested: "If we can, great. If we can't, that's fine."

Scientists say Earth is likely to reach more dangerous levels of warming sooner as a result of the president's decision because America contributes so much to rising temperatures. Calculations suggest withdrawal could result in emissions of up to 2.7 billion tonnes of additional carbon dioxide in the air a year — enough to melt ice sheets faster, raise seas higher and trigger more extreme weather.

Justin Trudeau chatted briefly Thursday by phone with Trump, and "expressed his disappointment with the president's decision," the Prime Minister's Office said in a statement.

In a statement, the prime minister echoed his environment minister's statement, noting that more is at stake than simply economic growth.

"This is about an ambitious and unshakable desire to leave a cleaner, healthier and more sustainable planet for our kids and for generations to come," he said.

"We are all custodians of this world, and that is why Canada will continue to work with the U.S. at the state level, and with other U.S. stakeholders, to address climate change and promote clean growth."

In a statement the White House said in addition to Trudeau, Trump also spoke with the leaders of France, Germany and Britain on Thursday. The statement said Trump thanked the four leaders for having "frank, substantive" discussions on the issue and reassured them that the U.S. remains committed to robust efforts to protect the environment.

Other significant stakeholders in the U.S. disagree with the president's decision, McKenna said.

"It's unfortunate that the U.S. administration says they're pulling out of the Paris agreement, but you can't stop progress."

The U.S. is joining Syria and Nicaragua as the only two countries that are part of the United Nations Framework Convention on Climate Change who are not parties to Paris.

McKenna said Canada will co-host with China and the European Union a ministerial summit here in September to advance action on the Paris agreement. She also said she intends to seek clarity on the U.S. position when she meets her U.S. counterpart in Italy next week.

A joint statement from Germany Chancellor Angela Merkel, Italian Prime Minister Paolo Gentiloni and new French President Emmanuel Macron expressed no appetite for renegotiating the accord, calling it a "vital instrument" and "irreversible."

McKenna met with her European and Chinese counterparts last week in Berlin to discuss the matter and the three will co-host a ministerial-level meeting in Canada in September to chart a path forward on climate change policy for major economies.

Trump said the agreement disadvantaged the U.S. "to the exclusive benefit of other countries," leaving American businesses and taxpayers to absorb the cost.

Dale Marshall of Environmental Defence issued a statement calling Thursday "a bleak day" for climate change and global diplomacy, but also expressing confidence the accord would survive the U.S. pullout.

"Withdrawing from the Paris agreement will result in the U.S. becoming isolated on the global stage," Marshall said.

Renewable energy prices will continue to fall as innovation continues and alternative forms of energy gain traction, he continued. And a diminished U.S. role in research and development will mean opportunities elsewhere, he added.

Catherine Abreu, executive director of the Climate Action Network, suggested that having the U.S. pulling out of Paris might actually be a good thing.

If Trump had stayed in, he could have used the tools in the agreement — intended to ratchet up commitments to cut emissions — as a way to cut the U.S. targets. That would open the door to other countries doing the same thing, Abreu said.

"We have the potential that the Paris agreement is actually much safer with the U.S. withdrawing from it."