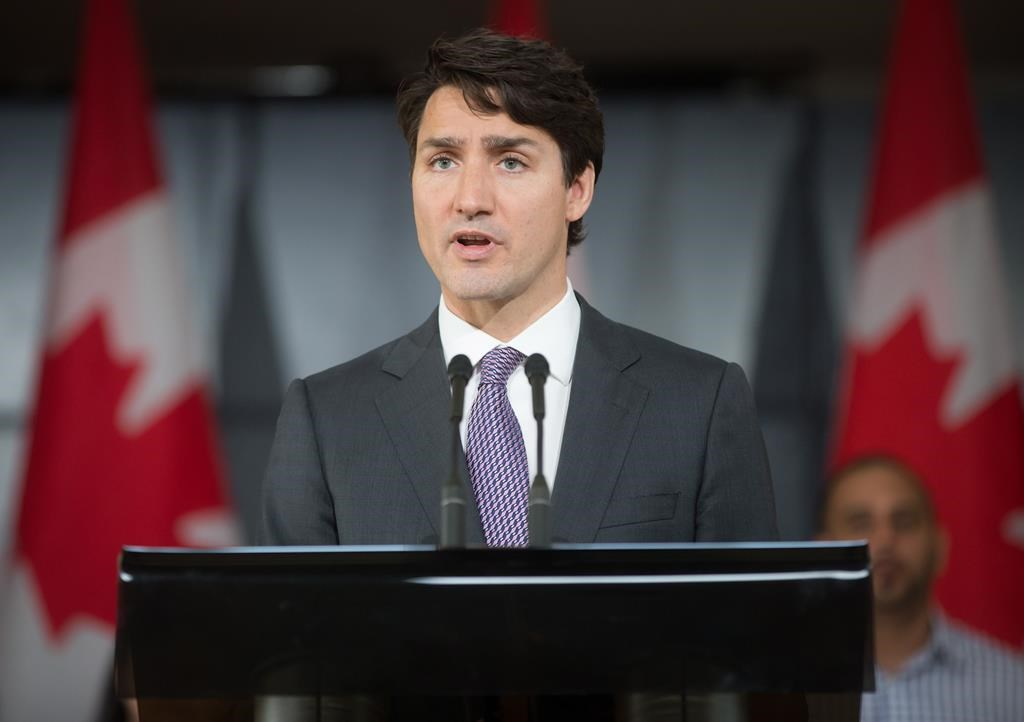 Prime Minister Justin Trudeau responds to questions during a visit to the Don Christian Recreation Centre in Surrey, B.C., on Friday, May 19, 2017. File photo by The Canadian Press/Darryl Dyck
Previous story
Next story

Justin Trudeau moved quickly Thursday to slam the lid on a constitutional can of worms opened by Quebec Premier Philippe Couillard, who unveiled a plan to eventually secure recognition of his province's distinctiveness in the Constitution.

"You know my opinion on the Constitution," the prime minister said as he arrived on Parliament Hill for a cabinet meeting.

"We're not reopening the Constitution."

That blunt, unequivocal response came even before Couillard formally launched an initiative aimed at encouraging dialogue about Quebec's role in the federation, with the eventual goal of reopening the Constitution to meet the province's long-standing conditions for formally signing on to the highest law of the land.

The potential for such a move to mushroom into constitutional squabbling over a host of thorny issues that could threaten national unity was on display almost immediately.

Saskatchewan Premier Brad Wall issued a statement saying "there are certainly other constitutional issues" his province would like to discuss — a list topped by the "terribly flawed" equalization formula, which Wall said penalizes oil and gas producing provinces while benefiting hydro-producing provinces like Quebec.

Equalization takes $500 million a year out of his province while providing $11 billion annually to Quebec, Wall asserted.

NDP Leader Tom Mulcair said Couillard's move provides an opportunity to revisit Senate abolition, which would require a constitutional amendment approved unanimously by all provinces. Couillard has in the past argued vehemently that doing away with the Senate is not in Quebec's interests.

And Couillard himself allowed Thursday that discussion of Quebec's constitutional demands could evolve to include the demands of First Nations for constitutional recognition of their nationhood.

Couillard urged Trudeau to read his 200-page plan before slamming the door on it. A spokesman for the prime minister said the federal government would indeed "take the time to carefully read the document" but simultaneously reiterated that it's a non-starter.

"As the prime minister said this morning, our government's position with regard to the Constitution has not changed and has always been clear," said Cameron Ahmad.

"We are not reopening the constitutional debate."

Ahmad suggested Quebecers were well aware when they handed the Liberals 40 of the province's 78 seats in 2015 that Trudeau had zero interest in constitutional wrangling and intended to focus on his priority: "growing the economy and creating good jobs for the middle class and those working hard to join it."

"That's the mandate we received from Canadians and Quebecers in the last election."

However, Mulcair accused Trudeau of arrogantly giving the back of his hand to Quebec — just like his father, Pierre Trudeau, did when he patriated the Constitution in 1982 over the objections of Quebec's then-separatist government.

"Thirty-five years that Quebec's been outside of the Constitution and I'm looking forward to an open, honest discussion about what we can do to change that," Mulcair said, accusing Trudeau of rejecting the idea simply to score points in the rest of the country at Quebec's expense.

"Using Quebec as a whipping boy is a very old strategy and Trudeau son is trying to emulate Trudeau pere and frankly it's unbecoming a prime minister of Canada, whose number one job is to always work to keep the country together."

However, opening the Constitution has not proven in the past to be a recipe for keeping the country together.

Former Conservative prime minister Brian Mulroney attempted to remedy Quebec's so-called exclusion from the Constitution with the Meech Lake accord in 1987. It would have recognized Quebec as a distinct society, put limits on federal spending power, guaranteed Quebec representation on the Supreme Court, increased the province's control over immigration and given it a veto over future constitutional changes — the same five conditions Couillard is resurrecting now.

The accord exposed deep divisions between Quebec and the rest of the country and eventually failed, as did the subsequent Charlottetown accord. The failed negotiations triggered a national unity crisis that culminated in a near-death experience for the country in 1995, when Quebecers came within a hair of voting to separate from Canada.

Since then, few political leaders have been willing to broach to subject of constitutional change. Trudeau himself has been crystal clear about his disinterest in the matter.

In an interview with The Canadian Press shortly after taking power in 2015, Trudeau said there is no pressing problem facing the country that can only be resolved by reopening the Constitution. He said he'd rather focus on things that can make "a concrete difference in people's lives" than waste time on constitutional wrangling.

And he scoffed at a suggestion that Quebec's continued refusal to formally sign onto the Constitution is a major problem.

"Which articulates itself how?" he asked rhetorically, noting that the Constitution does apply to Quebec, whether or not its government ever signs on.

"What they want the federal government to do is to focus on the economy and to focus on jobs and those are the kinds of things that we have been doing," said Transport Minister Marc Garneau.

International Trade Minister Francois-Philippe Champagne argued that the federal and Quebec governments have been working well together to deliver on "the priorities of people from Quebec, which is growing the economy, working for the middle class."

With 40 MPs and five ministers from the province, Champagne added: "The voice of Quebec has never been that strong in Ottawa."