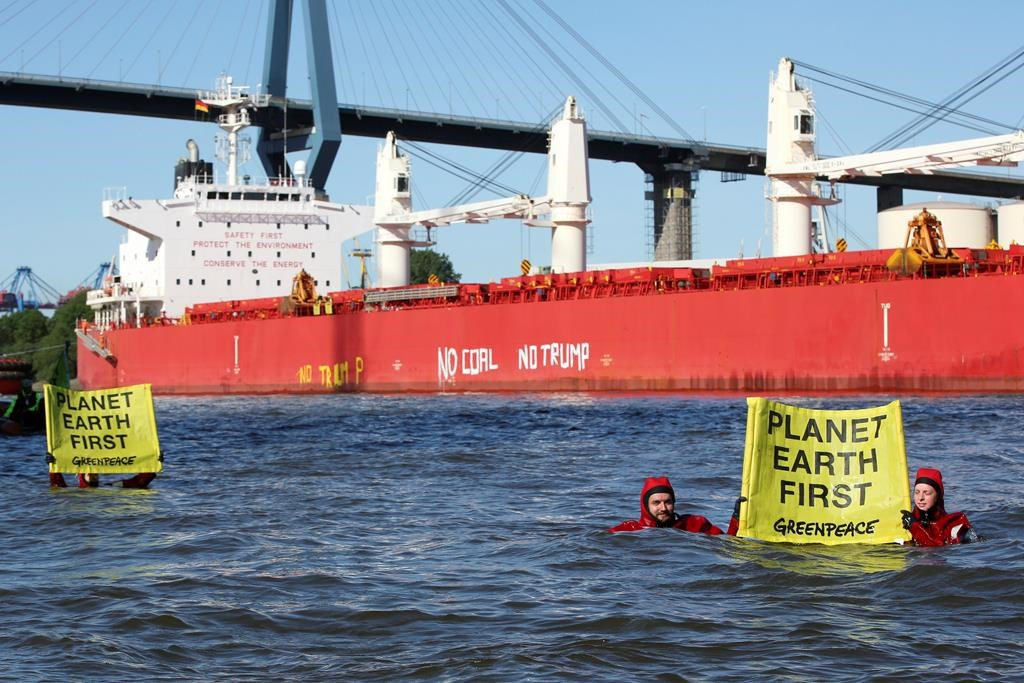 In this June 1, 2017 photo Greenpeace activists demonstrate in front of the freighter "SBI'Subaru" holding a banner with the inscription "Planet Earth First"' in Hamburg, Germany. Photo by the Associated Press
Previous story
Next story

Environmental campaigners protested Friday against President Donald Trump's decision to pull the United States out of the Paris climate accord, while nations around the world pledged to double down on their efforts to curb global warming in response to the U.S. move.

In Berlin, Greenpeace activists projected Trump's silhouette onto the side of the U.S. embassy along with the words "#TotalLoser, so sad!"

But Merkel, whose country hosts this year's international climate summit, said it was now time to look ahead.

"This decision can't and won't stop all those of us who feel obliged to protect the planet," she said. "On the contrary. We in Germany, Europe and the world will combine our forces more resolutely than ever to address and successfully tackle challenges for humanity such as climate change."

Anticipating a possible U.S. pullout, officials from China and the European Union — two of the world's major polluters — had prepared a declaration reaffirming their commitment to the 2015 Paris Agreement, which is widely considered a landmark deal for bringing together almost all countries under a common goal.

Brussels and Beijing believe in "the full implementation, without nuances, of the Paris climate agreement," Juncker said, and underlined that there can be "no backsliding."

While Trump said the United States would be willing to rejoin the accord if it could obtain more favourable terms, the leaders of France, Germany and Italy said in a joint statement Thursday that the agreement cannot be renegotiated, "since it is a vital instrument for our planet, societies and economics."

Germany's environment minister, Barbara Hendricks, told reporters in Berlin that other countries will fill the leadership vacuum but none will be expected to make up the shortfall in emissions reductions caused by Washington's exit.

Hendricks said the absence of $500 million contributions from the United States to the Green Climate Fund will be felt from 2018, but suggested the gap could be filled with "other financing mechanisms, for example through the World Bank."

The Green Fund is designed to help poor countries adapt to climate change and bypass some of the heavily polluting technologies formerly used by rich countries.

Poor countries are predicted to be among the hardest hit by global warming, with some foreseeing tens of millions of "climate refugees" in coming decades.

The government of one of Africa's largest economies said the decision damaged the rule of law and "trust between nations," adding that the U.S. has a "moral obligation" to support poorer countries in the global effort against climate change.

A top atmospheric scientist at the U.N.'s weather agency said Friday that the "worst-case scenario" caused by the planned U.S. pullout from the Paris climate deal would be a further 0.3-degree Celsius (0.5 Fahrenheit) rise in global temperatures by 2100.

The Paris accord aims to prevent average temperature around the world from heating up by more than 2 degrees Celsius (3.6 degrees Fahrenheit) before the end of the century, compared to before the start of the industrial age.

Scientists say every fraction of a degree change in average temperatures can lead to noticeable swings in local weather patterns, though exact consequences are difficult to predict.

Jordans contributed to this report from Berlin. Jamey Keaten in Geneva, Cara Anna in Johannesburg and Raf Casert in Tallinn, Estonia, contributed.