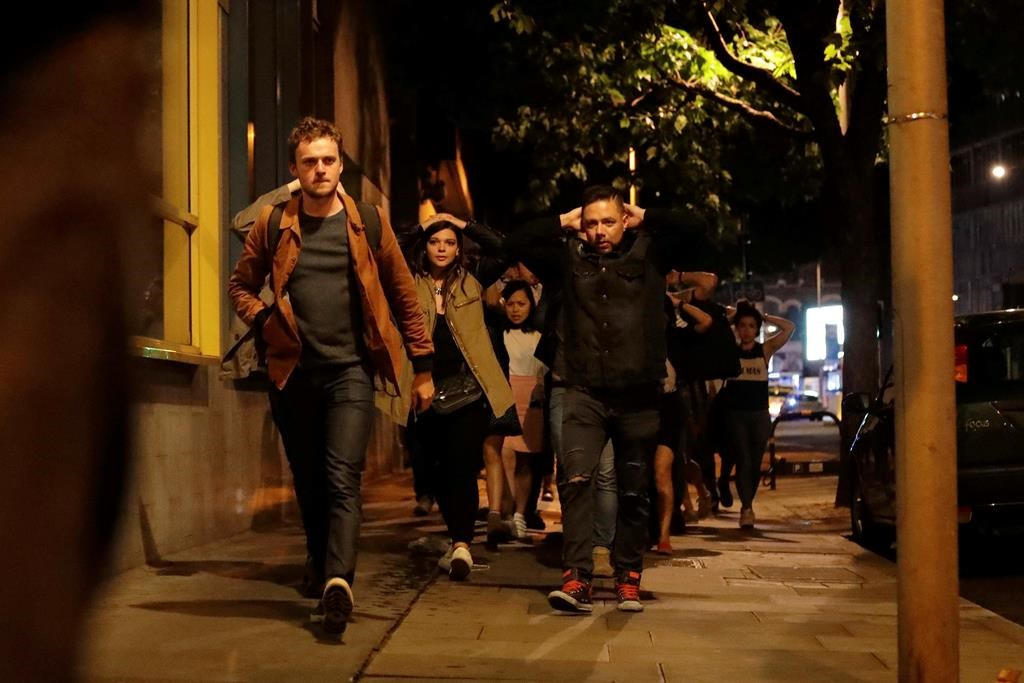 People with their hands on their heads as they leave inside a police cordon after an incident in London, Sunday, June 4, 2017. File photo by The Associated Press/Matt Dunham
Previous story

Canadian officials were monitoring developments in the deadly terrorist attack in London Saturday night, urging Canadian citizens in the British capital to avoid the area.

The Metropolitan Police head of counter-terrorism, Mark Rowley, said police believe all of the attackers were killed, but investigations are underway to ensure there are no more.

"Horrified by the events in London," Conservative leader Andrew Scheer said in a tweet. "Canada will always stand by the people of London."

"Our hearts are heavy with news of the violence in London today. To the people of Britain: you are in our thoughts and prayers," Ontario Premier Kathleen Wynne tweeted.

Canadian diplomats in England were advising Canadians to avoid the area around London Bridge and the nearby Borough Market until the areas were deemed safe.

Police rushed to London Bridge late Saturday after a vehicle mowed down pedestrians on the bridge. Gunshots rang out amid reports of knife attacks at Borough Market.

The force initially said officers were also responding to a reported third incident, in the Vauxhall area of London. But they said later that turned out to be an unrelated stabbing.

The violence turned a pleasant Saturday night in an area full of bars and restaurants into a scene of panic and chaos, with officers running through crowded streets screaming for people to flee and lifeboats drafted to help clear the area.

British media reported that more than one person had been killed in the rampage.

London's Metropolitan Police force said it had declared the attacks as "terrorist incidents."

The attack comes less than three months after an attacker ran down people with a vehicle on Westminster Bridge, killing four, then stabbed a policeman to death outside Parliament.

With files from The Associated Press

Security to be increased at Winnipeg's MTS Centre after Manchester bombing