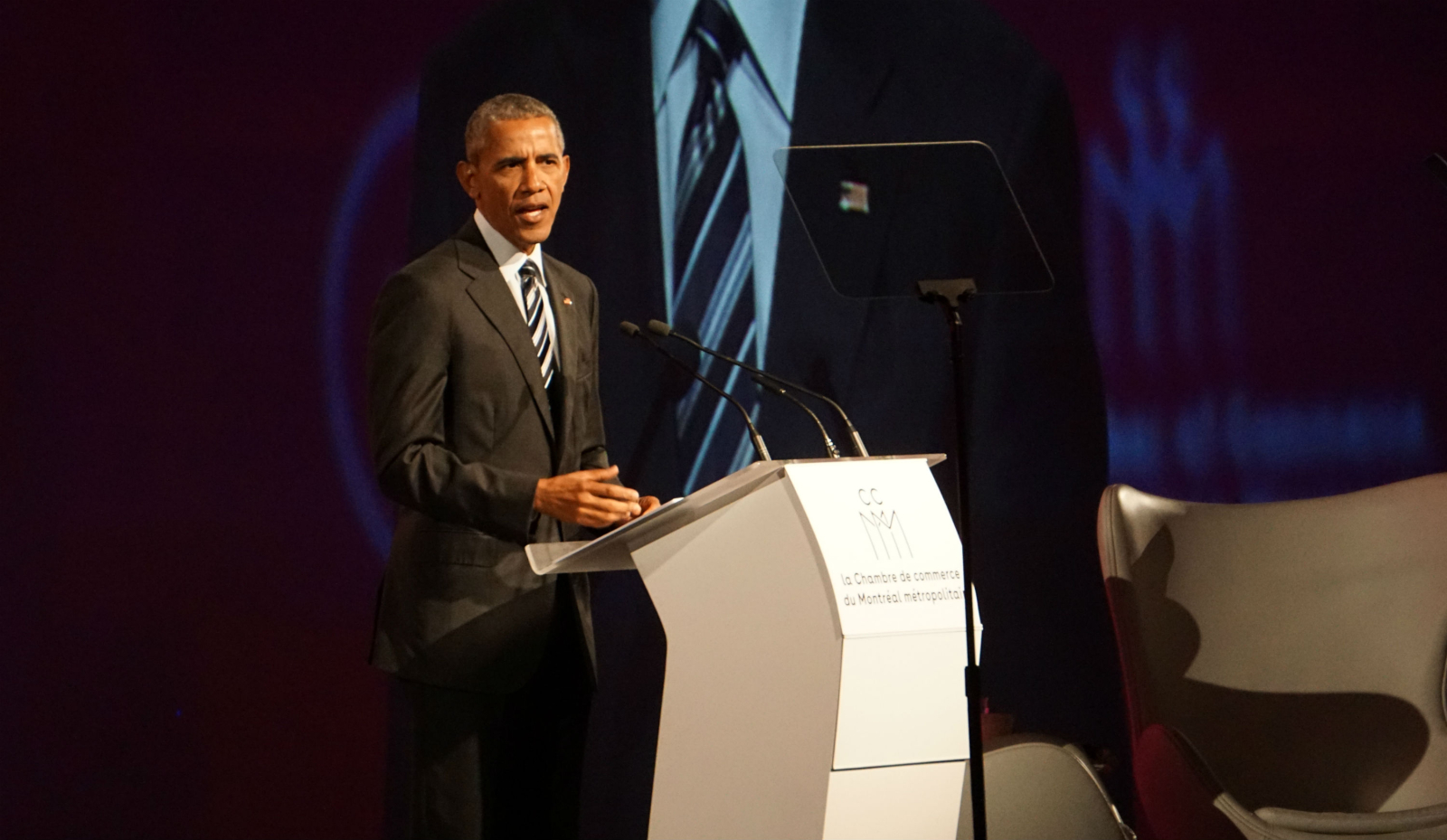 Barack Obama has made hundreds, if not thousands, of public speeches during his two terms as president of the United States.

The popular Democrat was known as an exceptional orator, and objectively speaking, his address in Montreal on Tuesday would not likely have made the list of his 50 best public presentations.

Even so, it was unforgettable — not because of what he said, but because of what it meant to the people in the room. In front of more than 6,000 Canadians at Montreal's downtown convention centre, Obama offered progressives something to hold onto.

From the corporate executives sipping wine in front of the stage, to the students who bought tickets to watch screens at the back of the room, Obama was met with adoration. His relentless approach hit home with many seeking refuge from the protectionist zeitgeist sweeping television sets all over the world.

"Mr. President, your achievements in office have made you one of the most transformative, inspirational leaders of the beginning of the 21st century," said Michel Leblanc, CEO of the Chamber of Commerce of Metropolitan Montreal, as he brought the former politician on stage.

And as the audience rose to their feet with thunderous applause, it was clear that they agreed.

Resisting the "comforts of tribe"

As the world reels over recent terrorist attacks in England, Sweden, France and Afghanistan, Obama begun his half-hour address by issuing a stark warning against retreating to the "comforts of tribe" or xenophobia. By the numbers, the world is technically less violent than ever before, he explained, but fear created from historic divisions makes isolationism seem an attractive path.

"In periods like this, people looking for control and certainty is inevitable," he said. "History also shows there is a better way. Canada shows, the United States, Europe, Japan show it is possible for us to overcome our fears and to reach across our divides."

He didn't reference U.S. President Donald Trump by name, but said feelings of global instability lead people to seek out "strong men." In times of disruption, he added, sometimes humanity goes backwards instead of forwards.

The eternal optimist however, Obama said the "extraordinary progress" humanity has made over the last decade is proof that strong international partnerships based on shared values can accomplish anything.

From wrestling the global economy out of the 2008 recession, to helping stop the Ebola crisis in West Africa, "when we lead with our hopes and not our fears," he said, "we are capable of doing things other nations cannot or will not do."

Buying time for the next generation

In the hours leading up to Obama's address, high-profile guests such as Montreal Mayor Denis Coderre and Quebec Premier Philippe Couillard expressed interest in hearing the former president talk about climate change, the environment and economy.

As if on cue, less than 15 minutes into his speech, Obama brought up the Paris Agreement — an historic international pact to keep global warming below two degrees this century through a variety of greenhouse gas reduction measures.

Again, without referencing Trump by name, he lamented his country's recent withdrawal from the accord. But he characterized it as an agreement that "even with the temporary absence of American leadership, will still give our children a fighting chance."

The statement earned him a round of applause — the first of two he received from the Montreal audience for talking about the landmark climate agreement. It's critical that countries all over the world do everything they can to curb emissions, said the former president, in order to "buy the next generation some time" to come up with major clean energy breakthroughs.

Obama echoed an oft-repeated political statement in Canada that environmental protection and economic progress are complimentary, not contradictory. He paired his economic messaging however, with a much less popular, pricey approach.

As Trump doubles down on "America first" messaging south of the border, he called on countries to close the gap between rich and poor nations, promote "intelligent" trade and aid in developing countries, and adopt a model of capitalism that benefits more than the "top one per cent."

It's not a surprising position coming from the first U.S. president to deliver on a promise to make health care available to all Americans, but one he had to be careful with while trying to maintain broad voter support in office.

"First, we're going to have to make sure that a high tech economy works for everybody and not just a few," Obama said. "We know that economies don't work as well or grow as fast when just a few prosper at the expense of a growing middle class...

"We have to recognize that economies that are increasingly unequal will pose challenges to our liberal, international order, and have the ability to strangle the goose that's laying all those golden eggs."

Since Trump — a polarizing politician to say the least — was elected to the White House in November last year, Obama has kept a relatively low public profile. The retired president has taken some heat in recent months for some of his lucrative public speaking deals.

On Tuesday, Leblanc, CEO of the Chamber of Commerce of Metropolitan Montreal, declined to answer media questions about how much Obama was paid for his engagement in Montreal. It was Obama's first appearance in Canada since an official state visit in June 2016.

Leblanc said he wasn't at liberty to disclose the figure as a result of contracts that were signed. In previous years, the Chamber of Commerce of Metropolitan Montreal has hosted other notoriously expensive guests, including Hillary Clinton, Bill Clinton, Arnold Schwarzenegger, and Nicolas Sarkozy.

Leblanc did however, mention that the City of Montreal's 375th anniversary, Canada's 150th birthday, and Justin Trudeau being one of the "coolest" prime ministers ever formed part of the 'pitch' to lure Obama in for the 2017 event. The former president agreed roughly a month ago, leaving little time for the chamber to put it all together.

Trudeau didn't attend the Tuesday afternoon engagement, but was able to rekindle his world-renowned "bromance" with Obama at a dinner date in Montreal that evening.

How do we get young leaders to take action in their communities? Thanks @BarackObama for your visit & insights tonight in my hometown. pic.twitter.com/EwJXPEkN3w

Despite the secrecy around Obama's Tuesday speaking fee (a fee that would likely place him much closer to the "one per cent" than much of his Montreal audience), his economic messaging resonated.

When a wealthy few amass a bigger and bigger share of income, he said, the concern is often that "the game is fixed, that our governments are serving the interests just of the powerful." It's a recipe for cynicism, polarization and distrust, he told the crowd, and a factor that motivates people to turn to "populist alternatives that may not actually deliver, but are tempting."

The greatest threat to this modern world is not the "great power tests" of the 20th century, Obama continued, but rather failed states, rogue states and terrorism. The cure to that ailment is alliances with other countries, he said, sharing of resources, and adopting a balance of "laws and traditions" that includes openness to immigrants and refugees.

He congratulated Canada on its accomplishment of the latter.

But he also called upon the international community to recognize how technology changes communication between global citizens: "We are more connected than ever before," he said. "It also makes it easier, ironically, for us to just find people who only agree with us; to surround ourselves virtually by those who will never challenge our assumptions."

Obama noted what he called a "splintering" in society, where disagreements are not based on opinion, but disagreement on cold hard facts. For a third time, he left Trump's name out of the equation, as he spoke about the fake news phenomenon.

"We are only accepting information that fits our opinions rather than basing our opinions on the facts that we receive, and evidence and reason and logic," he said. "So we're going to have to find a way to push back on propaganda and cultivate independent journalism, and listen to those with whom we disagree."

The bottom line, said Obama, is that "democracy is hard." Progress doesn't always move in a straight line and it's often very fragile. The good news is that the future does not belong to "strong men," he added, but to people who uphold principles, rule of law, human rights and empathy.

When his half-hour speech came to an end, Obama entertained questions from a moderator, Sophie Brochu, the chief executive officer of utility company Gaz Métro. And when that too, came to a close, as vigorously as they did when he entered the room, the crowd of 6,000 cheered and applauded.