Time for Canada to walk the talk on human rights 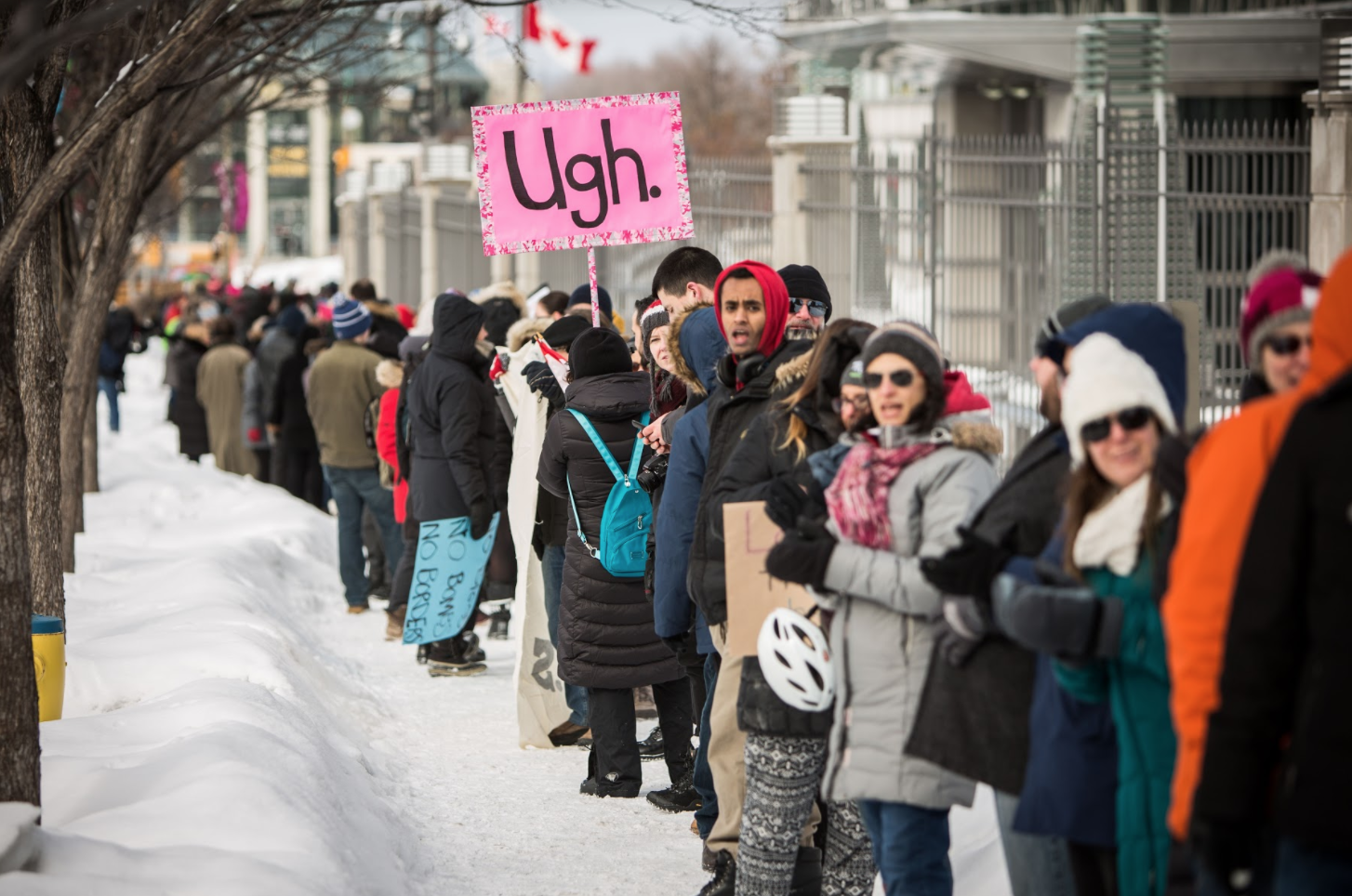 Protesters line up in front of the U.S. embassy and demand that President Trump remove his travel ban on seven Muslim-majority countries, Mon. Jan. 30, 2017 in Ottawa. Photo by Alex Tétreault
Previous story
Next story

In the last century, it has inspired social and political change throughout the world. It is one of the main purposes of the United Nations, whose charter serves as a sort of global constitution. In various forms, “human rights” appear in the overwhelming majority of national constitutions. The language of human rights has become common and widely repeated.

So it is in Canada. Indeed, in the General Social Survey, conducted by Canadian Heritage in 2013 in partnership with other federal government departments and non-governmental organizations, for the first time our Charter of Rights and Freedoms topped the list as the most important symbol of our identity—as high as our flag, and higher than the national anthem, the RCMP and even hockey.

We like our freedom and we understand our country is bound to guarantee it to each and every one as a matter of our inalienable human rights. That’s our home and native land.

But it wasn’t always so. In fact, prior to the 1982 patriation of our constitution and incorporation of the Charter, the place of human rights in Canada and its effective guarantee was less certain.

Of course, it is a reflection of the post-Second World War order that human rights gained prominence and become a global language for freedom and justice both between and within states. Canadians fought to protect our freedom and the freedom of others. To quote the UN Charter, human rights aim “to save succeeding generations from the scourge of war, which twice in our lifetime has brought untold sorrow to mankind.”

An idea is not enough

So we see the calls for freedom, justice and dignity articulated in terms of human rights from the "colour revolutions," through the Arab Spring, across the developing world to the Umbrella Revolution in high-tech, wealthy Hong Kong. Human rights are universal in their appeal and their language. The idea resonates and has irrefutably succeeded.

An idea, however, is not enough. Especially such an idea, for full lives in dignity and rights entail the effective realization of the idea in practice. And that means all rights for everyone, everywhere.

This week at the University of Ottawa, a cross-section of officials, scholars, advocates, civil society representatives and others from across Canada and beyond will take up the challenge of working this out. They will reflect upon the state of affairs, contemporary issues, and what can and must be done to fulfill the promise of human rights. In that spirit and with that energy, the conference Realizing Rights 2017: Human Rights and Constitutionalism intends to contribute soberly but constructively to the future of human rights in Canada and the world.

Here’s the rub: three quarters of a century after the UN Charter, and a third of a century after our Charter of Rights and Freedoms, human rights are manifestly far from being realized (“enjoyed”) by far too many people everywhere. Despite definite progress, the gap between declaration and real experience remains wide and, for some, stark.

The persistence of that shortfall — and some times its regression – brings into doubt the sincerity of the commitment and even the values.

This is not just a problem for the poor in Africa or the oppressed in other parts of the world. It is an obvious problem here in Canada, where homelessness is ubiquitous in inner cities, Indigenous youth are provided a fraction of means for their education compared with other Canadians (and, not surprisingly, their attainment suffers), and domestic violence remains widespread—to mention just a few well-known challenges.

Linked to these problems is the wavering nature of the administration of justice in Canada with an inexplicable shortage of judges in the world’s most educated country, those accused of serious crimes walking free for our inability to ensure timely trials, and the cost of access to justice often far beyond the means of ordinary people.

What confidence can people have in human rights and the rule of law when neither appear to be working for them or for many? And what are the consequences — socially, economically, politically — when this becomes widely observed and affects daily lives?

Not surprisingly, in recent times the idea of human rights has encountered pushback in various circles and, as we see on television, even some disdain at the international level. There are some good reasons to challenge the prevailing systems and approaches. But some in places like Geneva now speak about a post-human rights world.

What will that mean? Have we already forgotten the lessons of the last century and the basic needs, interests and aspirations of the universal human spirit?

The good news in Canada, during the 150th anniversary of our confederation, is that efforts are being made to redress past and ongoing wrongs, and new programs are being introduced to extend the reach and to make real the human rights of everyone. But we have a long way to go, and it will be achieved only through dedicated and persistent efforts. These will require robust institutions of good governance, of a dynamic and unhindered civil society, of an unfettered press, of a productive economy, and of active citizens. This means provision of adequate financial and human resources.

John Packer is a professor of law and director of the Human Rights Research and Education Centre at the University of Ottawa. For more on the conference, visit realizingrights2017.com.