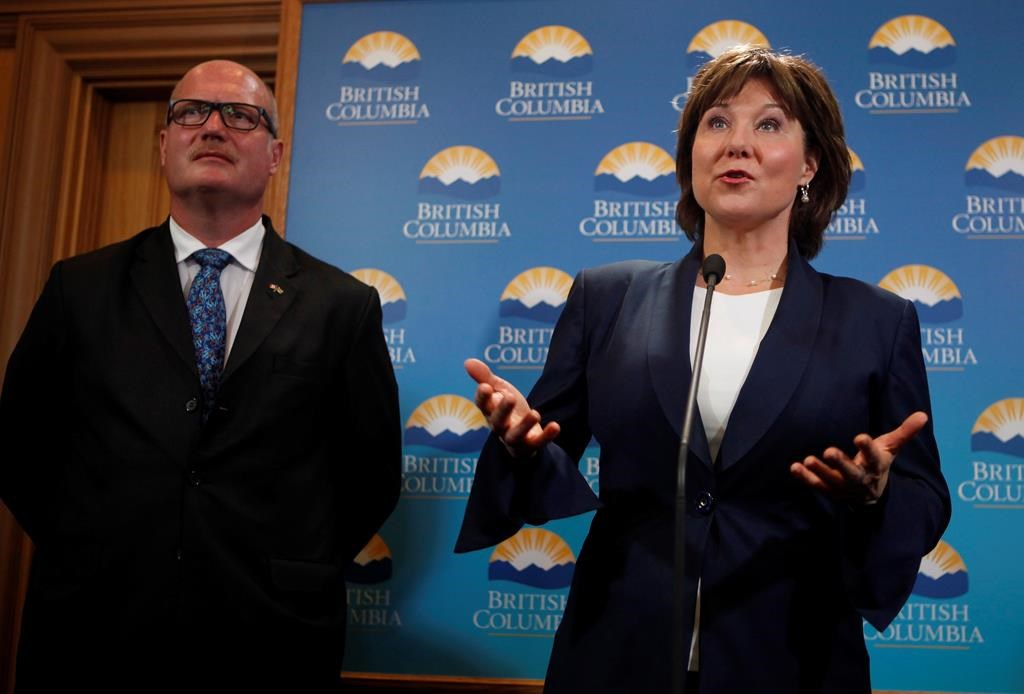 B.C. Finance Minister Michael de Jong joins Premier Christy Clark to talk with media after being sworn-in as Premier following a ceremony at Legislature in Victoria, B.C., on Thursday, June 8, 2017. Photo by The Canadian Press/Chad Hipolito
Previous story
Next story

The New Democrats were singing, the Liberals were solemn.

The contrasts in mood between British Columbia's main political parties was unmistakable Thursday when their members were sworn in to a divided legislature.

The differences didn't end there as Premier Christy Clark promised to stick to parliamentary rules until her minority government's likely defeat in a confidence vote, while NDP Leader John Horgan said the delays must end because the province needs a working government.

"I'm anxious, as all British Columbians are, to have a government that's going to be here for the long term," Horgan said after the NDP's swearing in ceremony.

He said the province needs action on the opioid crisis that has killed hundreds of people, leadership on softwood as new U.S. tariffs represent "a looming crisis," and preparation for the next school year under new rules from the Supreme Court of Canada on class sizes.

The election on May 9 did not produce a clear winner. Clark's Liberals won 43 seats, the NDP 41 and the Greens three, meaning no party won a majority in the 87-seat legislature.

B.C. hasn't had a minority government in 65 years.

The NDP and the Greens signed a political manifesto to work together in the legislature that would allow the NDP to form a government after bringing down the Liberals.

Asked why she doesn't concede and hold an immediate confidence vote when the legislature returns on June 22, Clark said times of uncertainty demand order.

"When we are in a period like this, something we haven't experienced since 1952, we should make sure that we are going back to the rules that have governed these institutions for centuries," she said. "That really is what provides our democracy with stability."

Clark added that she doesn't know if a change in government is inevitable. The Liberals have been in power for 16 years.

"It's an unusual situation when the party that gets the most seats doesn't form government, if that's what happens."

Whatever the outcome, Clark said she plans to remain as leader of the B.C. Liberals.

"Whatever job voters give me and the house gives me in this parliament, I'm going to take it," she told a news conference after a swearing in ceremony.

Clark's Liberals appeared dispirited entering the legislature, though Clark and Finance Minister Mike de Jong lightened the mood with a few dance steps in the chamber.

The New Democrats' ceremony was joyous. Beaming and laughing NDP members walked into the chamber as musicians outside sang the counter-culture anthem "All You Need Is Love" by The Beatles.

Horgan said he wants to get back to the legislature to test Clark's hold on power.

"We need a government in place as quickly as possible," he said. "I believe we've been delaying unduly. We want to roll up our sleeves and get to work."

De Jong, who is also the Liberal house leader, said the legislature will elect a Speaker on June 22, but he wouldn't say who is in line for the pivotal position in the minority government. He suggested political traditions generally mean the Speaker is a member of the current government.

Christy, you sure nailed it

Christy, you sure nailed it when you said We should make sure we are going back to the Rules that have governed these institutions for centuries
That is exactly why Site C needs to go before the BC Utilities Commission for a full review.