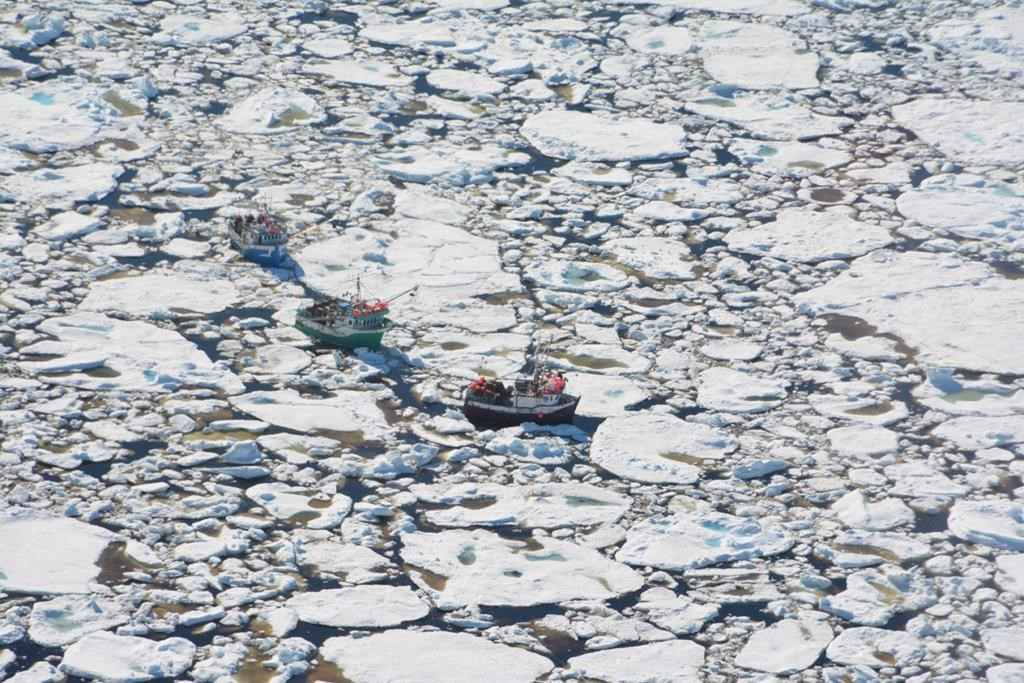 Boats are shown trapped in heavy ice off La Scie, Newfoundland in a handout photo from the Department of Fisheries and Ocean.
Previous story
Next story

Five fishermen were rescued Wednesday from the Avalon Princess fishing boat, which started to take on water after getting stuck in thick sea ice near La Scie, N.L.

Trevor Hodgson, the Canadian Coast Guard's superintendent of ice operations for the Atlantic region, said the heavy ice is more than two metres thick in some areas off the province's northeast coast.

"We had a bit of stuff that forms over the winter, the normal ice in the area," he said. "What we're experiencing now is the ice that has come south through the Arctic due to melting up there."

What's unusual this year, Hodgson said, is the way the winds have pushed the thick pack ice towards land rather than out to sea.

He said ice conditions are so bad the Coast Guard has been unable to free trapped vessels with its icebreaker Amundsen. Three fishing vessels remain trapped in ice off northeastern Newfoundland.

Alex Roy, a naval cadet with the military's Joint Task Force Atlantic, said a Cormorant helicopter was in the air on a training mission when an alert was issued by a sinking fishing boat off the coast of Newfoundland.

He said the crew from 103 Search and Rescue Squadron at 9 Wing Gander assisted the fishing boat at around 11 a.m.

All five fishermen were airlifted to safety by about 2 p.m. and did not require medical attention, Roy said.

The province's snow crab fishing season has been open for several weeks but most fishermen have been stuck ashore waiting for potentially hazardous sea ice to pass.

As the season progresses, however, the snow crab shell becomes soft and is no longer desirable. Hodgson said this has created a time crunch for fishermen vying for a piece of the lucrative industry.

"There is more willingness to take on risk to catch the crabs because we're getting to the end of the season and they want to make money," he said.

Earlier this week, a polar bear carcass washed ashore on the Avalon Peninsula, sparking concerns about the unusually heavy pack ice and its impact on sea life.

Hodgson said the Department of Fisheries and Oceans continues to research climate change, the melting of polar ice caps and the movement of Arctic pack ice.