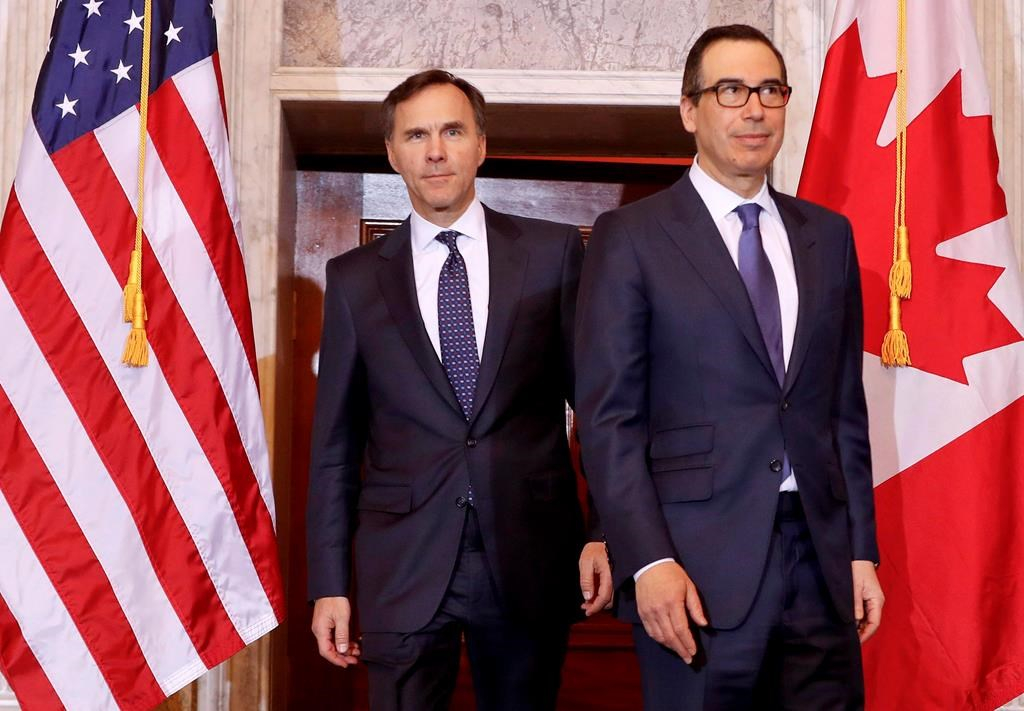 Federal cabinet ministers sat down Friday with President Donald Trump's treasury secretary for meetings in Ottawa on a number of contentious cross-border topics, including trade, taxes and infrastructure.

In his first official visit to the national capital, U.S. Treasury Secretary Steve Mnuchin was also scheduled to attend roundtable meetings with business leaders at an event hosted by the Business Council of Canada.

It marks his fifth meeting with Canadian counterpart Finance Minister Bill Morneau since the former hedge-fund manager was sworn in a few months ago.

And with NAFTA's renegotiation on the horizon, their developing relationship will likely face more delicate discussions ahead.

Canada's relationship-building exercise with the new U.S. administration has involved most members of Prime Minister Justin Trudeau's cabinet. In an effort to build stronger bonds, senior ministers have been making frequent visits to Washington since Trump took office.

Several of them also joined Morneau at Friday's meetings.

"Thanks very much for hosting me, this is obviously a very important relationship," Mnuchin said after taking a seat at the table next to Foreign Affairs Minister Chrystia Freeland.

"There are many, many areas of co-operation, both on the economic side but also the international side."

Morneau said the agenda for the day was to share perspectives on key issues for both countries, calling it "a really great opportunity to talk about what's going on in Canada."

Earlier this week, Morneau said in an interview that the pair would discuss areas where they can work together as they move toward talks on the North American Free Trade Agreement, as well as how best to grow their respective economies and confront global challenges.

Mnuchin's trip to Ottawa is the first by a U.S. treasury secretary in a decade.

An official in his department said Thursday the talks would likely include tax reform in Canada and the U.S., financing infrastructure, financial regulatory issues, bilateral trade and some early discussions on NAFTA.

"We're not, of course, looking to start (NAFTA) negotiations yet with Canadians on any topic — it's premature for that and we still have some domestic work to do," said the official.

The 90-day consultation period required by U.S. domestic law only started a few weeks ago, the official added.

"We'd like to at least get a sense from the Canadian side what they're thinking of in terms of timing and issues."

Canadian officials and business leaders are expected to emphasize that the relationship between the two countries is working well.

Can the TPP, reviled by Donald Trump, still offer a quick fix for NAFTA?