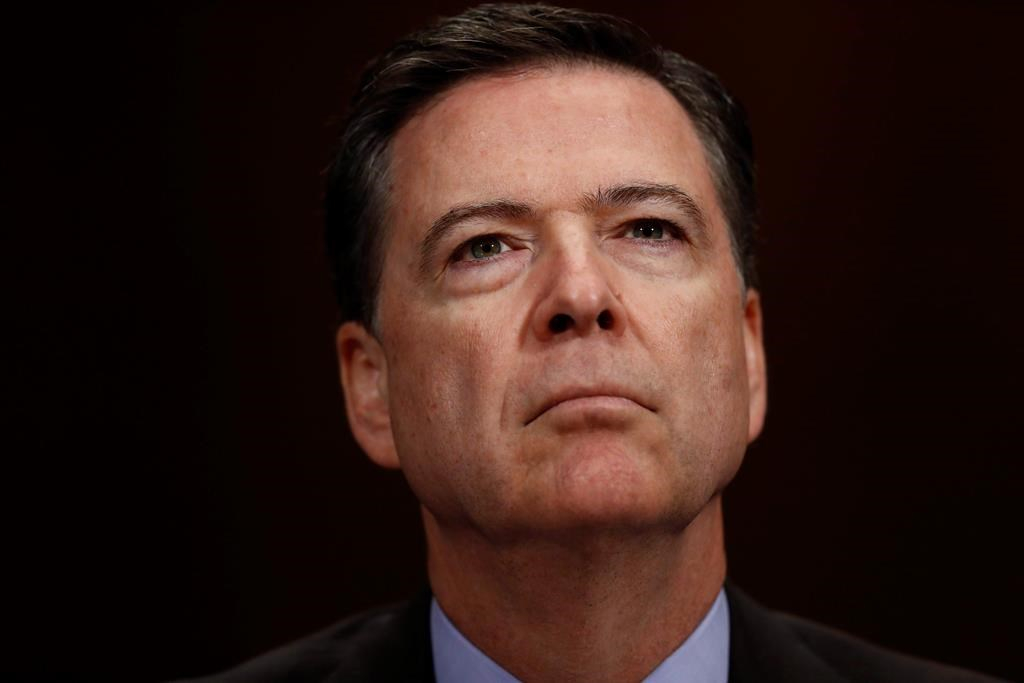 FBI Director James Comey listens on Capitol Hill in Washington on May 3, 2017. File photo by The Associated Press/Carolyn Kaster
Previous story
Next story

The now-fired director of the FBI says he was so concerned about Donald Trump that he chronicled their conversations in notes, later tipped off the media about those notes to force the appointment of a special investigator, and that the investigator is now likely probing whether the president committed the crime of obstructing justice.

His appearance before Congress was so eagerly awaited that Washington's bars were crowded by 9:30 a.m., as the denizens of a president-detesting capital amassed in unusually quiet watering holes to gaze at TV screens, occasionally cheering on Comey.

His testimony before the Senate intelligence committee didn't deliver the bombshell they longed for: It was more like a series of grenades tossed in multiple spots, leaving damaging marks in different places.

The right wing pointed to its preferred spots. Comey revealed Trump was not under investigation in the initial probe into Russian election collusion; he declared Barack Obama's former attorney-general urged him not to use the word "investigation" in describing the Hillary Clinton email affair; and he admitted tipping off reporters, prompting Trump's legal team to suggest he should be investigated too.

The president's detractors saw a completely different hearing, one where the country's former top policeman referred to the president as a liar, as untrustworthy, and as someone who may be under investigation for obstructing justice.

Comey even poked fun at the president, alluding to Trump's threat to release tapes of the conversations that led to his firing — it's not clear whether such tapes actually exist, or whether Trump made it up in a tweet to menace Comey.

''Lordy, I hope there are tapes,'' Comey said, drawing cheers from the patrons at one Washington's jam-packed pubs, Duffy's.

He suggested the subject of his exchanges with the president could now be a matter for law enforcement. Comey dropped several hints to that effect. Twice, when asked about obstruction of justice, he suggested the special counsel would examine it.

He said it wouldn't be appropriate for him to offer his own legal analysis but added, of one exchange with Trump: ''I took it as a very disturbing thing, very concerning, but that's a conclusion I'm sure the special counsel will work towards, to try and understand what the intention was there, and whether that's an offence.''

Pressed again later about obstruction of justice, he repeated: ''That's Bob Mueller's job to sort that out.''

Mueller is the special counsel appointed by a civil servant amid the controversy. Comey said he holds Mueller in the highest regard. He was Comey's predecessor as FBI director.

He revealed his role in getting Mueller appointed.

After being fired, Comey said he was distressed to see the president mislead people about the circumstances that led to his termination. The White House at one point claimed it had to do with the controversial Clinton email probe; Trump later connected the issue to Russia.

Comey responded by providing memos of his meetings with Trump to a friend at Columbia Law School. The friend tipped off a newspaper. And that's how details of their encounters first made it into the public domain, upping the pressure for an independent probe.

The president's lawyer denied that Trump ever demanded loyalty from Comey, and never asked the FBI boss to drop an investigation into administration official Michael Flynn. These claims come from notes Comey started taking, the first time he met Trump on Jan. 6.

Their relationship was rocky from the start.

The FBI head said he left their first meeting and immediately started taking notes in the car.

He strongly hinted at the possibility of criminal intent.

Comey asked, in his testimony: Why would the president specifically make sure nobody else was around whenever he asked him for loyalty, or for Comey to publicly defend him, or to lay off on Flynn?

He said Trump even kicked his senior staff out of the Oval Office, and the staff appeared sheepish over it, right before he expressed his hope that the police might leave the Russia-friendly Flynn alone.

''A really significant fact to me is, so, why did he kick everybody out of the Oval Office?... Why would you kick the attorney general... the chief of staff out, to talk to me, if it was about something else? That, to me, as an investigator, is a very significant fact...

The Republicans appeared to close ranks around their president.

Several GOP lawmakers pushed Comey, and defended Trump. Sen. James Risch asked whether he was aware of anyone ever being charged with obstruction of justice for saying they hoped for something, like Trump supposedly hoped he would lay off Flynn?

Republican James Lankford said it didn't sound like the president was very aggressive. Trump never got anyone else to ask the FBI to drop the Flynn matter, Comey admitted. ''This seems like a pretty light touch (from Trump),'' Lankford said.

Legal opinions have been mixed on the issue.

Some say there's no obvious obstruction case, others say there's a pattern of behaviour that shows intent — a private dinner, a meeting in the Oval Office where everyone got kicked out, the fact Comey got fired, and Trump later suggesting he had the Russia investigation in mind when he did the firing.

What most analysts do agree with is that this is primarily political: If Republicans stick with Trump, and they control Congress, and there's no impeachment threat, it's unclear whether the issue ends there because the legal theory's muddy over criminal cases involving presidents.

The bar cheered one more time, when a Democrat mocked the president's defenders. Kamala Harris went the ridicule-by-metaphor route, drawing from her days as a lawyer and attorney general in California to heap scorn on the idea that Trump was exonerated because of how he worded his request on Flynn.

''In my experience of prosecuting cases, when a robber held a gun to somebody's head, and said, 'I hope you will give me your wallet,''' Harris said, ''the word 'hope' was not the most operative word at that moment.''