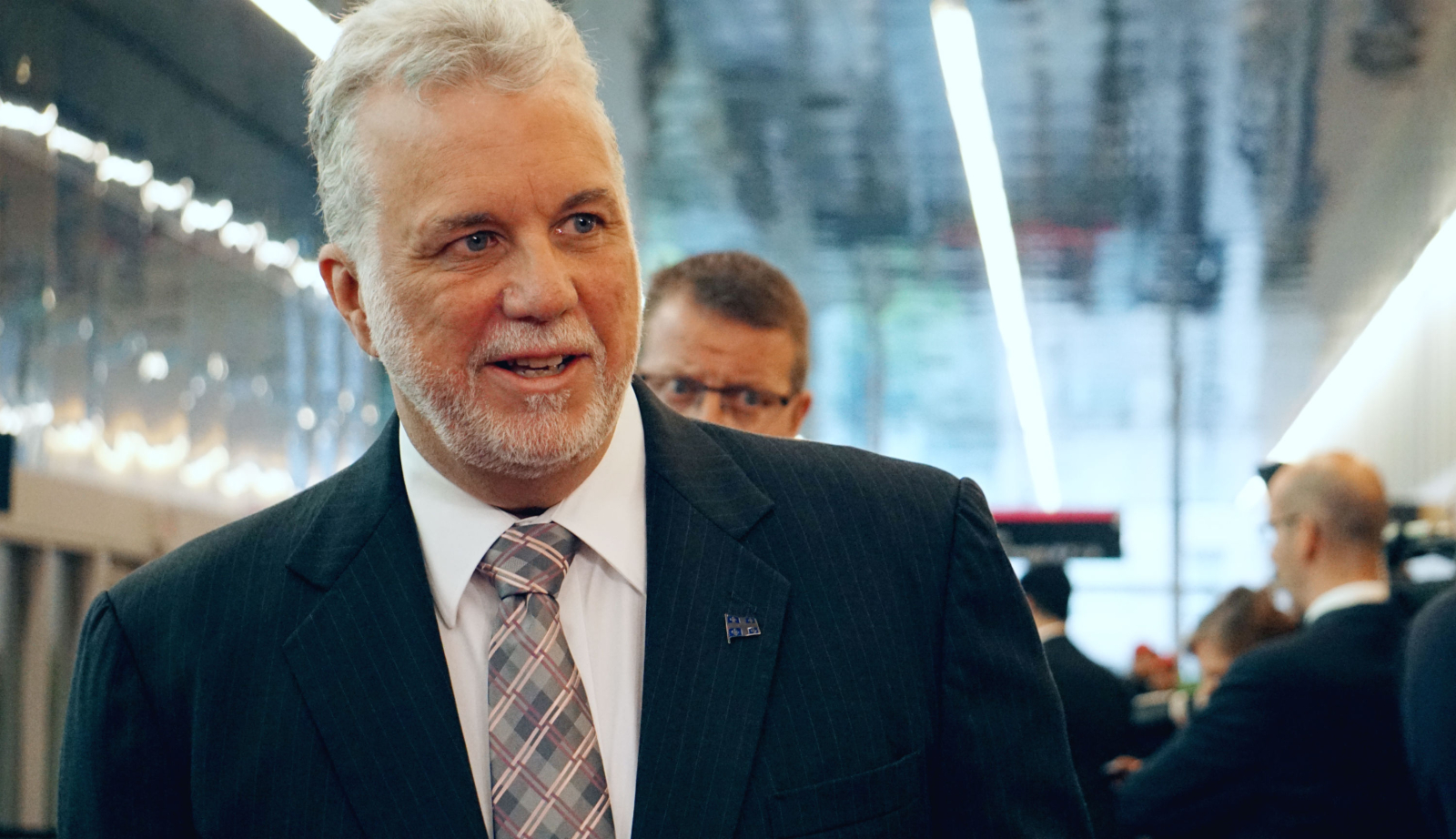 The latest was on June 1, when Prime Minister Justin Trudeau dismissed the Quebec premier's Canada-friendly 200-page constitutional reform discussion paper without having read it. Nonetheless, Couillard has seemed uncharacteristically elated in recent days.

Statistics Canada reported Friday that Quebec’s unemployment was six per cent, its lowest rate in 40 years. And last week, Couillard warmly welcomed a new member of the National Assembly from a minor—but rising—party, Gabriel Nadeau-Dubois of Québec Solidaire.

Why does this bring a smile to his face?

Although the Liberals’ 70 National Assembly seats give them an ample cushion against their chief rival, the Parti Québécois (PQ) with 30, they have often look tired and hapless. This is partly due to the lingering effect of dodgy party financing schemes under former premier Jean Charest that, among others, have his former deputy premier Nathalie Normandeau facing corruption-related charges.

Although Couillard, a neurosurgeon with an earnest paterfamilias mien, has helped dispel the suspicions of wrongdoing left by some Charest-era ministers, he has often been unsteady in responding to new controversies. He has, for example, shown an unseemly personal loyalty to old-guard Liberal bagmen and cronies. This has exposed him to criticism.

Over the past two weeks, however, his re-election prospects for 2018 brightened as a bitter feud erupted between Quebec's two sovereigntist parties: the PQ and Québec Solidaire, or QS. Both have elected new leaders in the past year, with the PQ last fall choosing longtime backroom strategist and former journalist Jean-François Lisée, and QS last month selecting former student strike leader Gabriel Nadeau-Dubois as “co-spokesperson” along with Manon Massé.

The QS was formed a decade ago by the merger of the Union des forces progressistes, a leftist coalition that included péquistes disgruntled at their party’s rightward turn, Quebec NDPers, socialists and communists, and Option Citoyenne, a social movement led by feminist leader Françoise David. Until now, she and her two fellow MNAs had played a kind of 'social conscience of parliament' role, taking up cudgels for the poor, unemployed, low-income women and immigrants, and for democratic socialism, environmentalism and anti-globalization.

But QS has momentum with Nadeau-Dubois’ by-election victory May 29 in the east-end Montreal riding of Gouin. The new MNA’s rise began in 2012, when he was the most prominent among leaders of the “Maple Spring” student strike against then-Premier Charest’s initiative to raise university tuition fees in the province by 75 per cent over five years.

Nadeau-Dubois’ almost breathtaking self-confidence has convinced many that he is, at 26, already a premier-in-waiting. This despite his party’s National Assembly caucus of three: his own seat, inherited from party founder David who retired, and which he won with 69 per cent of the vote (the PQ opted not to run a candidate), and two other working-class Montreal ridings held by Manon Massé and Amir Khadir.

Nadeau-Dubois and many in his party, as sovereigntist in their hearts as any péquiste, nonetheless soft-pedal their endorsement of the independence option for two reasons. The first is a matter of principle: they are socialist progressives first, and separatists second.

Forced to choose, most would prioritize the former. This has won them the support of left-leaning voters and activists who find the Liberals (and the Coalition avenir Québec, with 22 seats, a kind of Union Nationale redux) too right-wing, but whose chariness of Quebec independence makes the PQ anathema to them as well.

Among these are ethnic and religious minorities, including Muslims for whom the PQ is radioactive due to its 2014 proposal—when in power—for a Charter of Values, which called for a ban on religious garb among public sector workers. In practice, this might have meant that caregivers in nursing homes and schoolteachers, many of whom are French-speakers from places such as Algeria and Morocco attracted to Quebec by a pro-francophone immigration policy, could have faced the choice of removing their hijabs or losing their jobs. At least, that is the fear the policy planted in their minds.

The second reason is more a matter of political calculation. Having won over supporters among so-called ‘allophone’ minorities, as well as some anglophone progressives who remain attached to Canada, Nadeau-Dubois and QS now have to tread carefully to keep them on board, while also sounding sufficiently nationalist to keep their more numerous sovereigntist backers satisfied.

Nadeau-Dubois’s prospects are enhanced too by his youth, his practiced manner of speaking—he is the son of labour and community activists—and his already-demonstrated ability to galvanize enthusiasm among young Quebeccers. Within days of launching his candidacy in Gouin, QS added 4,000 new members, reaching 14,000. The Liberals last reported membership roll at the end of 2015 was 37,000, which has likely dropped since then, while the CAQ claims 11,500. The PQ has the biggest membership at 90,000, but the average age of its members is 58, making it a grey party seeking rejuvenation.

No surprise then, that PQ leader Lisée, himself 59 and whose commitment to Quebec independence is the guiding theme of his life, saw in Nadeau-Dubois a way to capture Quebec’s youthful voters and bring them aboard the separatist train. This is why he pointedly decided that the PQ would not contest Gouin, so as to offer a conciliatory easy path to victory for the rookie QS politician.

It was consistent, as well, with the PQ’s back-channel effort to seek “convergence” among all the province’s pro-independence parties and organizations, to develop a strategic coalition for independence in the wake of a PQ victory. That was the plan, but the QS membership spoiled it at a party policy conference in late May, by renouncing their tentative agreement with the so-called “Organizations United for Independence” or OUI.

That now-broken accord was a new strategic twist in the quest for independence. In the event of the election of a majority coalition of sovereigntist parties in the National Assembly, it called on them to launch a “constituent assembly” that would draft a Quebec constitution which would then be put to a referendum vote.

The QS withdrawal was treated by PQ partisans as nothing less than rank betrayal. Having earlier been indulgent in not contesting Gouin, Lisée now bristled in response to Nadeau-Dubois’ by-election win: “A contest without opposition produces a victory without glory,” he sniffed.

Meantime, Premier Couillard effusively welcomed Nadeau-Dubois at his National Assembly debut this week: “We have a new actor on the scene, who speaks…with much more skill, in my opinion, and much more clarity (than the PQ) and whom Quebeccers will listen to more and more.”

It was hard for him to contain his schadenfreude as he contemplated the deepening rifts among his sovereigntist adversaries.

— Christopher Neal is a Montreal-based journalist who has previously worked for the Montreal Gazette and Ottawa Citizen, as a freelancer in Latin America, and as a communications manager with the World Bank Group.