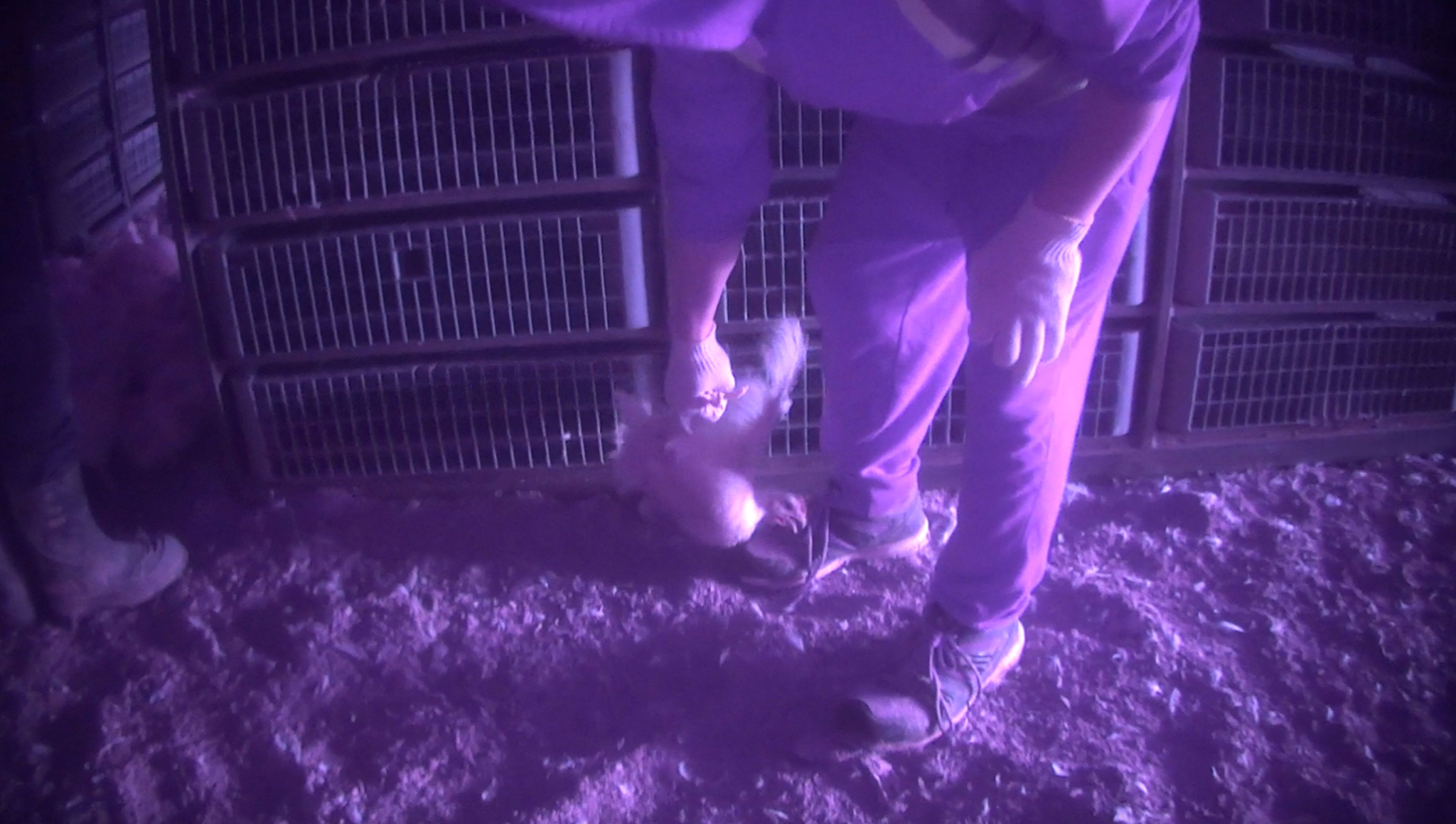 A hen struggles under an employee's grip at a B.C. poultry farm, caught on camera in an undercover investigation between May and June 2017. Photo courtesy of Mercy For Animals
Previous story
Next story

A man tries to rip a chicken in half with his bare hands, throwing the mangled, flailing body on the ground.

Other workers at a chicken factory farm in British Columbia punt and throw the birds, slam them against walls and transport crates, tear the legs off fully conscious animals, and mimic sexually abusing them.

Available to the public at ChickenTorture.ca, the graphic video was shot by a whistleblower at more than a dozen B.C. chicken factory farms that supply a Lilydale slaughterhouse in Port Coquitlam, B.C..

Five workers—including at least one supervisor—now have been fired from Elite Farm Services, which staffs the farms. The B.C. SPCA is recommending multiple animal cruelty charges under the Criminal Code and the Prevention of Cruelty to Animals Act, which entail penalties of up to $75,000, five years prison sentence and a life ban on owning or being around animals.

This Lilydale slaughterhouse supplies chicken to Loblaws grocery stores — so if you eat chicken, I believe you are probably participating in this abuse without even realizing it.

This latest video comes after a video exposé by Mercy For Animals in October that shows turkeys at a Lilydale slaughterhouse slammed upside down into metal shackles, sliced open while still conscious, and scalded alive in defeathering tanks.

Despite consumer pressure, Lilydale has failed to take any meaningful action to end the worst forms of animal abuse in its supply chain—placing profit over even the most basic decency, in my opinion. Mercy For Animals calls on Loblaws to implement animal welfare policies that ensure Lilydale and its other poultry suppliers aren’t torturing animals.

But this isn’t just about Lilydale or Loblaws. Chickens are the most abused animals on the planet.

More chickens are killed for food than all other land animals combined — 680 million chickens annually in Canada alone. Too often, chickens don’t even “make it” to slaughter. At these factory-like facilities, countless chickens — just like the ones in our new video — are tortured to death.

And make no mistake: They feel it. Chickens are not only complex and intelligent beings but also experience immense pain and fear.

Chickens also form intricate social structures that include families and friends. Rapid eye movement means they dream when they sleep, just like we do. Give them some sunshine, and like a cat, they will bathe in it. Lovingly pet them and they will purr.

Sadly, most factory-farmed chickens will never see the sun or know anything but the stuff of nightmares.

Even if they aren’t being ripped to death by workers, chickens grown for their flesh endure lives filled with misery and deprivation. Broiler chickens spend their entire lives in filthy sheds where overcrowding leads to disease.

Chickens are bred to grow so quickly that their legs and organs can’t keep up, making death from deformities, heart attacks, and organ failure common. If they manage to live for six or seven weeks, their breasts sometimes too heavy for the birds to even reach food or water without severe pain, they are sent to slaughter.

We need stronger laws and oversight of the chicken industry to ensure that the most basic animal welfare comes before profits.

More than a few bad apples

Mercy For Animals demands prosecution of the workers caught sadistically abusing animals, but punishment alone is not enough. This is not a case of a few bad apples — this is a rotting tree. In fact, all 12 Mercy For Animals investigations of randomly selected facilities in Canada have uncovered abuse that shocks and horrifies most people.

It’s time for systemic change. Offenders like Lilydale must change their policies to ensure this stops.

That’s why Mercy For Animals urges major Lilydale customer Loblaws to require third-party audits, live-stream video surveillance, and a zero tolerance policy for animal abuse at its supplier farms to deter the most heinous acts of worker violence. Mercy For Animals also asks the company to improve genetic selection (breeding animals with desired traits) and monitoring systems for poultry in its supply chain to prevent lameness and other serious health issues, and to end live-shackle slaughter in favour of less cruel systems that eliminatehorrific suffering.

If this egregious animal abuse upsets you, and you expect more from Canadian companies, know you are not powerless. You can sign the Change.org petition calling on Loblaws to adopt meaningful changes in its supply chain and share the video so that other Canadian consumers can learn the truth.

And of course, if you don’t do so already, please consider the most significant step you can take to end the cycle of suffering by leaving chickens and other animals off your plate.

While Lilydale and Loblaws should be held responsible for this animal abuse, the fact remains that without our demand for their products, it wouldn’t have existed in the first place.

I will definitely be sending

Support local organic farmers. Visit their farms to see for yourself how their animals are cared for.
When chickens animals are stressed in this way, it affects the meat which in turn affects our health. We do have choices. Ask lots of questions .