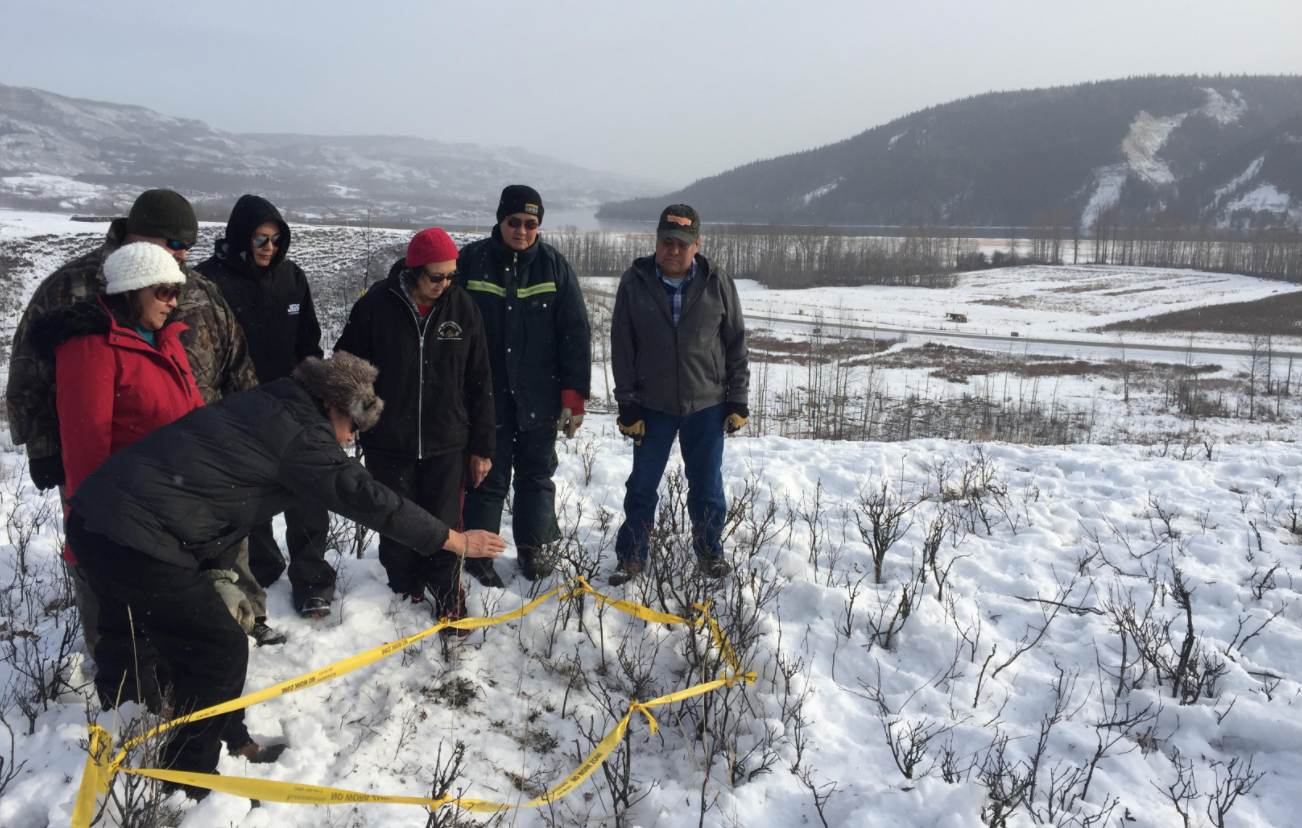 First Nation chiefs are urging the British Columbia government to respect their cultural sites, as construction associated with the controversial Site C dam threatens to plow through a historic burial ground and sweat lodge on their traditional territory.

Part of the construction on the $8.8-billion hydroelectric project includes the realignment of Highway 29 at Cache Creek in northeastern B.C. — construction that could begin as early as this month, according to the province and BC Hydro.

In the pathway of the highway realignment are sacred cultural sites — including a 4,000- to 5,000-year old gravesite and a nearby sweat lodge — for the Prophet River and West Moberly First Nations. Both the First Nations (and landowners who are being expropriated for the construction) want the provincial government to change the route.

“B.C. and BC Hydro are paying no attention to us whatsoever,” Chief Roland Willson of West Moberly First Nation told National Observer.

Piles of letters back and forth

Willson and Prophet River Chief Lynette Tsakoza raised their concerns last week in a letter to Premier Christy Clark. The Dunne-za gravesite was identified in June 2016, and while thousands of years old, continues to be used by the Dunne-za (Beaver People) today, it said.

Their letter follows a series of letters from B.C. party leaders on the future of the Site C dam as a confidence vote looms in the legislature that could result in the minority Liberal government’s defeat by the end of June.

Last week, NDP Leader John Horgan wrote a letter to BC Hydro suggesting it shouldn’t finalize any contracts for Site C until it can go to the B.C. Utilities Commission for a review. Clark responded with a letter of warning to her colleagues in the BC NDP and BC Green parties that any delay would cost $630 million.

Neither Clark nor BC Hydro returned calls requesting their comment on this story.

Site C will be the third dam built on the Peace River, pitting local First Nations and farmers — such as Ken and Arlene Boon, whose property will be expropriated for the highway — against employment and economic growth.

Construction of the “clean energy” dam started in 2015 on the river that flows through the heart of Treaty 8 Territory, which belongs to the Doig River, Halfway River, Prophet River and West Moberly First Nations. If finished, it will produce enough power for 450,000 B.C. homes each year, but its reservoir is expected to destroy more than 100 kilometers of river valley bottoms along the Peace River and its tributaries.

In an interview with National Observer, BC Green Party leader Andrew Weaver disputed Clark’s claim that altering the realignment of Highway 29 would cost hundreds of millions of dollars.

“It’s absolutely absurd to suggest that somehow there will be a delay cost of $600 million,” said Weaver, who met with the chiefs earlier this week and plans to visit the area next week.

The Green Party has agreed to work with the NDP to form a majority in the legislature, and Weaver said they plan to remove the Liberals from power on June 22 after the throne speech is tabled. Horgan couldn’t be reached for comment, but Weaver said the two parties would then send Site C to a six-week expedited review to British Columbia Utilities Commission.

“It would give us data to make an informed decision,” he said.

Grand Chief Stewart Phillip, president of the Union of BC Indian Chiefs, said his organization has supported the Treaty 8 nations, the private property owners and environmental groups in their opposition to the Site C dam.

“The vast majority of British Columbians continue to oppose the Site C dam,” he said. “It loomed large in the provincial election as an issue. There are so many reasons why this proposal should be put to bed for once and for all.”

Willson added that the local chiefs have been raising their concerns since 2010. They even presented an engineering report in March 2017 highlighting the alternate alignment that would avoid the grave site and sweat lodge as well as expropriations for local farmers.

“In fact, BC Hydro’s own Environmental Impact Statement confirms that this alternative is technically and economically feasible,” said the chiefs’ letter, which suggested the cost of $5 million – or 0.06 per cent of Site C’s nearly $9-billion budget.

The request for a change in the realignment was apparently denied on March 29. As a result, the First Nations have submitted formal complaints to the Canadian Environmental Assessment Agency in May 2017.

“We’re hoping for someone to stop it,” said Willson, adding that the process has been infuriating.

Editor's Note: This story was updated at 8 p.m. Eastern Time to correct a factual error. The previous version stated that the Indigenous burial site and sweat lodge were 5,000 to 6,000 years old. They are, in fact, 4,000 to 5,000 years old.

I wonder if the BC Liberal

I wonder if the BC Liberal party and BC Hydro are somehow linked in some way to make sure this opposed dam is built?

" If finished, it will