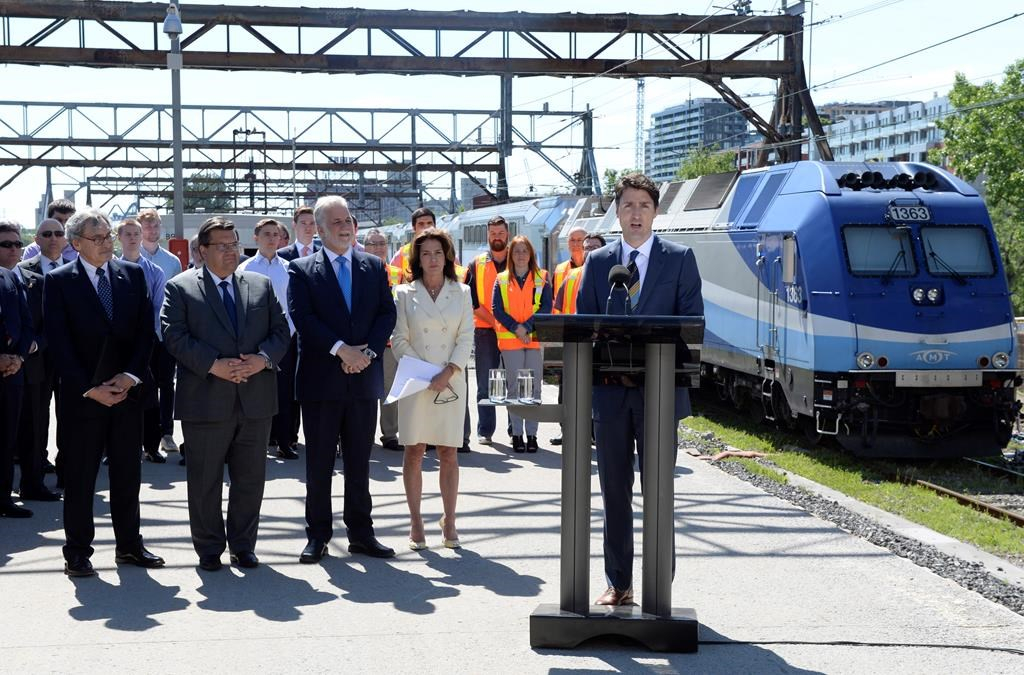 Prime Minister Justin Trudeau announces a $1.28-billion commitment toward a major Montreal rail project that will connect the city to its suburbs and to its international airport on Thursday, June 15, 2017. Photo by The Canadian Press/Paul Chiasson
Previous story

Ottawa is committing $1.28 billion toward a major Montreal rail project that will connect the city to its suburbs and to its international airport, Prime Minister Justin Trudeau said Thursday.

At the outset, the funds will come in the form of a grant via Ottawa's infrastructure-funding agreement with Quebec, Trudeau said.

Once the federal government's proposed $35-billion infrastructure bank is operational, Quebec can submit the project for approval, which, if granted, would free up the $1.28 billion for other infrastructure projects in the province.

"The REM (Reseau electrique metropolitain) is one of the most ambitious public transportation projects in our history," the prime minister said of the $6-billion venture.

"In addition to making it quicker and easier for millions of Quebec residents to get around, the REM will reduce the number of cars on the roads, help ease traffic and make the air cleaner."

The Quebec government and the Caisse de depot pension fund are also contributing to the project. In January 2015, Quebec and the Caisse announced the agreement to build the electric light-rail network.

The Quebec government had been calling on Ottawa to provide at least $1 billion toward the rail project. Once completed, the 67-kilometre network will include 27 stations and operate 20 hours a day, seven days a week. It will link Montreal's downtown to Pierre Elliott Trudeau International Airport as well as the areas north, south and west of the city.

Construction is set to begin this fall, with the system ready for operation by the end of 2020.

Couillard said the project would create 34,000 jobs and he expects it to be delivered on time and on budget.

"This project is a great example of sound management from start to — it would seem — to finish," he said. "The way the Caisse and its partners have been consulting, checking with experts, I think there's a guarantee of the highest probability of it being delivered on time and on budget, and with excellent service quality."

Couillard defended the fact the pension fund manager did not stipulate a minimum Canadian content requirement in the bidding process, pointing out that 14 out of 18 companies that make up the various consortiums are either Quebec companies or Canadian subsidiaries of foreign companies.

Trudeau was also asked again about Couillard's announcement two weeks ago his government would tour the country in order to discuss Quebec's relationship with Canada in hopes the talks would eventually lead to the province signing the 1982 Constitution.

His answer echoed his previous ones.

"Philippe and I have a tremendously positive working relationship where we have been able to deliver concretely for Quebecers and indeed all Canadians," Trudeau said.

"I am always looking for ways to improve the way this federation and the way our communities serve our citizens but, as I've often said, I don't think that necessarily goes through opening up the Constitution. I think it doesn't."