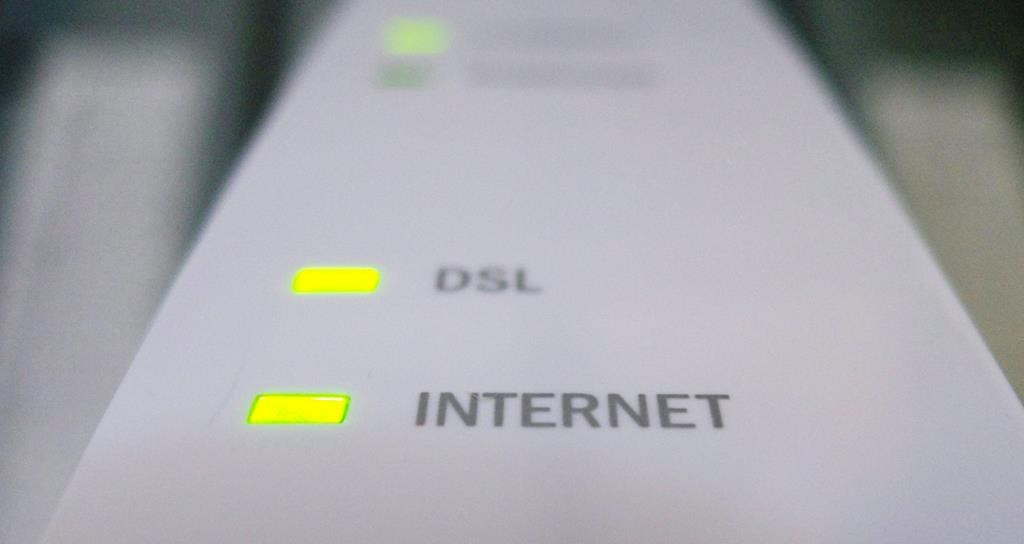 Function lights are illuminated on a modem in Chelsea, Que., July 11, 2011. File photo by The Canadian Press/Adrian Wyld
Previous story
Next story

Prime Minister Justin Trudeau stopped the presses Thursday on the idea of imposing a five per cent tax on broadband Internet services as a way of "levelling the playing field" in Canada's rapidly evolving news industry.

The majority report calls on Ottawa to apply the tax, levied on broadband Internet providers, to high-speed Internet services that allow for the streaming of music, movies and TV shows.

Liberal MPs on the committee tried to sell the idea as creating more fairness, since the tax is already applied to satellite and cable TV services.

But not long after the report's release, Trudeau spiked the proposal.

"We respect the independence of committees and Parliament and the work and the studies they do, but allow me to be clear: We're not raising taxes on the middle class — we're lowering them," Trudeau said in Montreal.

"We're not going to be raising taxes on the middle class through an Internet broadband tax. That is not an idea we are taking on."

Liberal MP Hedy Fry, the committee chair, argued that applying the levy makes sense since more media companies are moving into streaming, which allows them to escape the five per cent tax currently imposed on traditional broadcasters.

"Levelling the playing field was a thing that concerned us most," Fry said.

The committee spent 15 months studying the ailing Canadian media industry, which has been steadily losing advertising revenue and market shares to online giants such as Facebook, Netflix and Google.

In 2015, Facebook and Google earned two-thirds of online advertising revenue in Canada, the report noted.

The report also recommended that the feds ensure foreign news aggregators that sell ads around Canadian news be subjected to the same tax obligations as providers in Canada.

"The amount of money that goes to Google and Facebook in news media is astounding, and it is taking away from a limited pot (of advertising revenue)," Liberal MP and committee member Seamus O'Regan said in defence of the taxation idea.

The report also recommends forcing the CBC to eliminate digital advertising; allowing media companies to deduct taxes on digital advertising on Canadian-owned platforms; and a five-year tax credit to compensate print outlets for a portion of their digital investments.

The report also signalled the need to protect the fading presence of local news in Canada. One solution suggested the CBC make local news and programming a priority.

"This is an emergency," O'Regan, a former broadcaster, said of the fact fewer journalists than ever are keeping watch on important municipal issues.

"This is a crisis in our democracy."

The Conservative members of the committee introduced a report of their own, arguing that their Liberal counterparts are living in the past. Conservative MP Peter Van Loan tabled a dissenting report, which he described as being "very much in contrast" with the main document.

"Overwhelmingly, we thought the recommendations of the majority on the committee were embracing an effort to turn back the clock to keep things the way they were," Van Loan said.

"Essentially, to try and replicate the ways of the analog world in the new digital world we didn't think was practical. This world is changing, and change brings disruption."

Higher taxes and government control of the news are not the answer to the problem, he added. The committee report was the latest analysis of Canada's struggling news industry.

News Media Canada, which represents more than 800 print and digital media outlets, was scheduled to release recommendations of its own Friday. The group's report was obtained by The Canadian Press.

The organization is calling for changes to the Canada Perodical Fund, an existing federal tool that provides financial assistance to magazines and non-daily newspapers.

It proposes a "civic news" component within the fund to support journalism of a "democracy-enhancing nature." The changes would make daily newspapers, some digital-only publications and The Canadian Press eligible for assistance under the fund.

A report released in January by the Public Policy Forum think tank called on Ottawa to consider changing tax laws to favour Canadian news publishers in the digital advertising market and use the new revenue stream to establish an independent, publicly subsidized journalism fund.

That study, commissioned by the Department of Heritage, also recommended that advertising with foreign-owned websites no longer be deductible under the federal Income Tax Act.

It also said that extending a 10 per cent withholding tax to commercials and advertising carried by foreign digital media would create a new revenue stream for Ottawa of up to $400 million annually.

— with files from Morgan Lowrie in Montreal

'We were lucky': massive cyberextortion attack could have affected Canada

Rural Canadians already pay exorbitant fees for their mediocre Internet ("highspeed" broadband) services. This is despite their ISPs already being heavily subsidized to provide rural internet services and infrastructure, by Federal and other governments' grants. This is tantamount to gouging (twice).

Rural folks don't have the luxury of choice of internet service providers or extensive economical plans to choose from, as urban folks do.

Any additional taxes or charges laid on the ISPs would only be passed on to consumers. Rural consumers are paying more than their share for this CRTC's mandated "essential" service, through their monthly fees and taxes paid toward subsidies.

Instead of figuring out ways to grab more cash from the middle classes, why don't the Federal and other governments set reasonable across-the-board fee schedules for this essential service and investigate how much of their subsidies are actually lining the overflowing pockets of the ISPs which receive them?