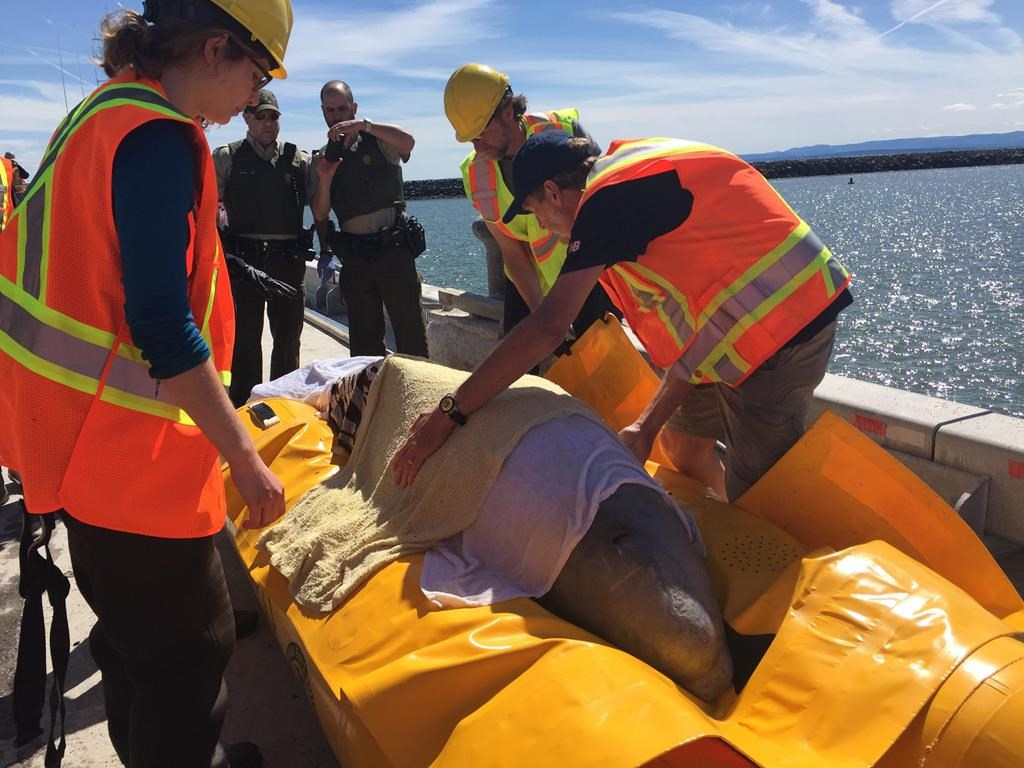 A beluga whale is rescued after getting stuck in the Nepisiguit River in Bathurst, N.B., on Thursday, June 15, 2017, in this handout photo. Handout Photo by The Fisheries and Oceans Canada, GREMM ou Whale Stewardship Project
Previous story
Next story

A young beluga whale that lost its way in a northern New Brunswick river has been rescued in a unique and complex operation that saw the endangered marine mammal travel by land, air and sea before being reunited with a pod in its natural habitat.

"We put him back in the St. Lawrence near a pod of belugas and he started to swim right away," Marie-Eve Muller with the Group for Research and Education on Marine Mammals said Thursday evening. "He seemed quite vigorous back in the water."

The juvenile male whale waded into New Brunswick's Nepisiguit River weeks ago, likely following a school of fish or an impulsive teenage drive for adventure.

The beluga — about two metres long — appeared healthy but showed no sign of leaving the river on his own.

The federal Fisheries Department, marine mammal groups and scientists banded together and launched a rescue mission to move the wayward beluga back to the deep blue sea.

Rescuers gently coaxed the whale into a net, using an acoustic deterrent device to direct the beluga towards the trap, and then transferred him to a sling.

The mammal, a bit thin with skin in poor shape, was assessed by a veterinarian and given an injection to keep him calm during the transport.

The whale was then carried from the river to the back of a truck, where he was transported to the Bathurst, N.B., airport.

The beluga was then carefully loaded onto a small airplane and flown to Riviere-du-Loup, Que. The veterinarian stayed by the beluga's side during the flight and gave him intravenous fluids.

The whale's odyssey continued in Quebec as he was loaded back on to a truck and transported to a port near Cacouna, where he was put on a boat.

Rescuers then ferried the young whale to an area near a pod of belugas, and set him free.

He re-entered the ocean through the St. Lawrence Estuary near Cacouna, Que.

"It was very intense," said Tonya Wimmer of the Marine Animal Response Society. "There were a lot of people involved but it was a very co-ordinated activity. We discussed the best options beforehand so everyone knew the game plan. It went extremely smoothly because it was such good co-ordination."

She said it's unknown why this whale went off on its own and decided to stay in the fresh water river.

"Many times it is because they are following fish that happen to be running. We have had some cases where it's an animal that has just gotten confused and gets lost basically," said Swimmer, a lecturer of marine mammalogy at Dalhousie University. "It was a natural case for us to say we needed some sort of intervention to either herd the animal out of the river or try to capture it and take it out of the river."

She said whales can survive in fresh water but are not designed to be there permanently.

As for his chances of survival, she said the rescue group did everything possible to give the beluga a good chance of rejoining a pod.

The whale will be equipped with a tracking device so scientists can observe where it goes.

Fisheries and Oceans, the Group for Research and Education on Marine Mammals, the Marine Animal Response Society, the Vancouver Aquarium, the Shedd Aquarium from Chicago, Ill., the Whale Stewardship Project and veterinarians from the Universite de Montreal were major players in the relocation effort. A prayer was offered before the rescue operation started by Pabineau First Nation elder Gilbert Sewell.

The population of the St. Lawrence belugas has been declining since the early 2000s and it's believed there are fewer than 900 of them still in existence.

"Baby beluga in the deep blue

Thank you Raffi - Baby Beluga Lyrics, all rescuers, and all who opposed an Energy East pipeline port at Cacouna. To deny that pipeline in its entirety is a no-brainer.

Will the humpback whales still sing?