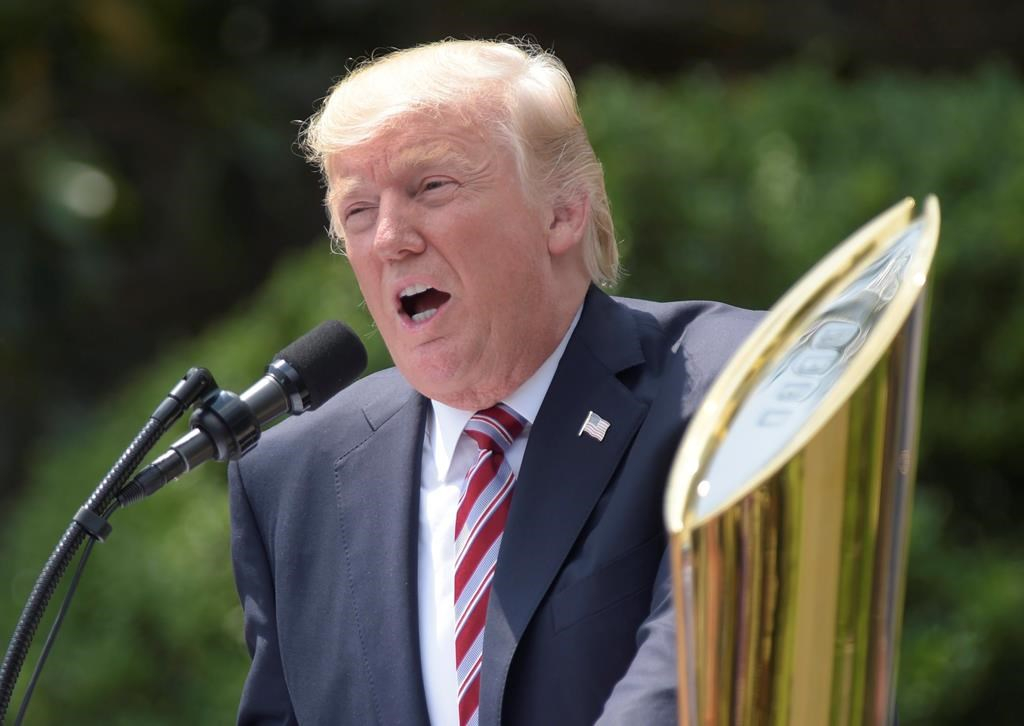 President Donald Trump speaks on the South Lawn of the White House in Washington, on Monday, June 12, 2017, during a ceremony honoring the 2016 NCAA Football National Champions Clemson University Tigers. File photo by The Associated Press/Susan Walsh
Previous story
Next story

U.S. President Donald Trump has nominated a big-money political donor and philanthropist with personal ties to the coal industry as the next American ambassador to Canada.

The White House said in a statement Thursday that Trump has picked Kelly Knight Craft for the post, which has been vacant since January, and sent the nomination to the Senate.

Knight Craft, who would replace former ambassador Bruce Heyman, still needs approval from the Senate to take up the post.

Knight Craft is married to American billionaire Joe Craft, who is the president and CEO of Alliance Resource Partners L.P., one of the largest coal producers in the eastern United States.

A profile by McClatchy newspapers in 2012 called him possibly Kentucky's most powerful non-elected individual.

He was a critic of the Obama administration's climate policies and his SUV licence plate is stamped with the slogan, "Friends of Coal."

Maryscott Greenwood, the head of the Canadian-American Business Council called the nomination "an inspired choice."

"It's a complement to Canada that the White House would choose a person of Kelly's calibre, intellect and talent, so I am excited about the prospect."

Greenwood said the Trump administration will be working quickly to get Knight Craft's nomination approved so she can be in place for the North American Free Trade Agreement negotiations in mid-August.

She said she doesn't think Knight Craft's connection to the coal industry and Canada's commitment to the Paris climate accord will be a sore spot.

"Well, that's her husband's deal and he wasn't nominated, so I wouldn't make the assumption that that's a problem," Greenwood said.

Knight Craft and her husband have also collaborated on political fundraising and both support the University of Kentucky, Knight Craft's alma mater. Donation records compiled by the U.S. Center For Responsive Politics show a multimillion-dollar history of political donations — Craft's Alliance Resource Management gave $2 million to Karl Rove's American Crossroads Super PAC in 2010, $250,000 in 2014, and $500,000 each to other Super PACs.

There are also donations in their own names. He's donated to at least one senator, Pat Toomey, who sits on the Senate finance committee that would be involved in NAFTA negotiations.

Knight Craft is reportedly close with Majority Senate leader Mitch McConnell. She has donated to and co-chaired fundraising efforts over the years for her home-state senator.

"Everything indicated to me that they get along well," Mac Brown, chairman of the Republican party of Kentucky, has said of the McConnell connection.

"She's an unbelievable, very nice woman who is extraordinarily hard-working," Brown told The Canadian Press in an interview earlier this year.

The chamber McConnell presides over is expected to deal with major issues affecting Canada over the coming years, including tax reform, trade disputes and the potential renegotiation of NAFTA.