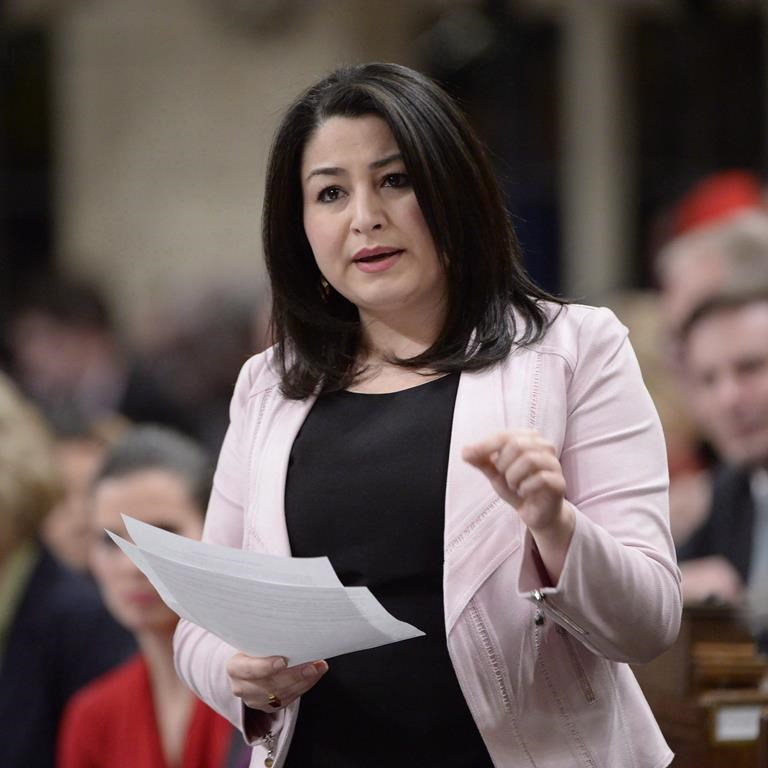 Minister of Status of Women Maryam Monsef answers a question during Question Period in the House of Commons in Ottawa, Thursday, March 23, 2017. File photo by The Canadian Press/Adrian Wyld
Previous story

The Liberal government is launching its long-awaited strategy on gender-based violence Monday, which will include a way to develop and share research on everything from street harassment to getting boys and men involved in solving the problem.

Status of Women Minister Maryam Monsef will shed more light on which programs will get a share of the $101 million over five years — plus $21 million annually going forward — the 2017 budget committed to a federal strategy on gender-based violence when she unveils the plan in Toronto.

That will include money for creating a centre of excellence within Status of Women Canada, which could help the relatively small agency with an annual budget of less than $40 million get better at making sure its ideas are both evidence-based and taken seriously government-wide.

"We need to understand when we spend money, how it's being spent, what the results are," Patty Hajdu, who was then minister for status of women, told The Canadian Press in June 2016 as she got ready to launch cross-country consultations. "We have no data. We have no plan."

Those consultations showed those on the front lines were looking to the federal government to play a leadership role in data collection and analysis, including by establishing national baseline data and finding ways to measure which solutions work and which do not.

Experts recommended more research on how gender-based violence impacts specific groups of people, including visible minorities and the LGBT community, the use of safe technology in order to combat online violence, and indigenous women living in both urban and rural areas.

Last Thursday, the government listed other potential research priorities for the centre of excellence in its response to a recent report from the status of women committee, such as "hypersexualization; street harassment; cyberviolence; violence on post-secondary campuses; sex trafficking; engaging men and boys to prevent and address gender-based violence; groups at higher risk of experiencing violence," as well as the potentially harmful effects of algorithms for social media and other online technology.

The centre of excellence will also help the government make sure that its gender-based violence strategy lines up with the recommendations coming out of the national inquiry into missing and murdered indigenous women and girls.

The government said it will also get better at evaluating its own programs.

The wide-ranging strategy is otherwise expected to focus on better support for survivors, a justice system that is more sensitive to the needs of those who experienced sexual assault or other forms of violence, as well as ways to stop it from happening.

"It will also provide expert support to federal partners to deliver trauma-informed and gender-sensitive training to front-line federal law enforcement officers, increase the availability of shelter for those fleeing violence, and ensure that federally regulated workplaces are free from harassment and sexual violence," she said.

Other hints dropped in the government response include the public safety department thinking about creating a commissioner for online safety, and that the justice department is considering whether the Criminal Code should have tougher provisions against harassment as part of its ongoing review.

Anuradha Dugal, who was on the advisory council for the strategy and was prevented from sharing details, said prevention will be key.

"Focusing on prevention of violence so that the youngest members of our society learn about gender-based violence and know how to prevent it and stop it in their own lives (is) really important," said Dugal, the director of violence prevention programs at the Canadian Women's Foundation.

The strategy was designed to be federal, not national, meaning those who have been calling for a comprehensive plan to ensure similar access to similar programs and services across the country will have to wait.

Still, there are signs that the Liberal government is open to expanding it in the future, as the government response talks about aligning efforts with what the provinces and territories are doing.

"I think the federal government is doing what it can, but I think it will only solve that problem of same level of service with very, very strong engagement and partnership across the country," said Dugal. "But this is a really important first step."