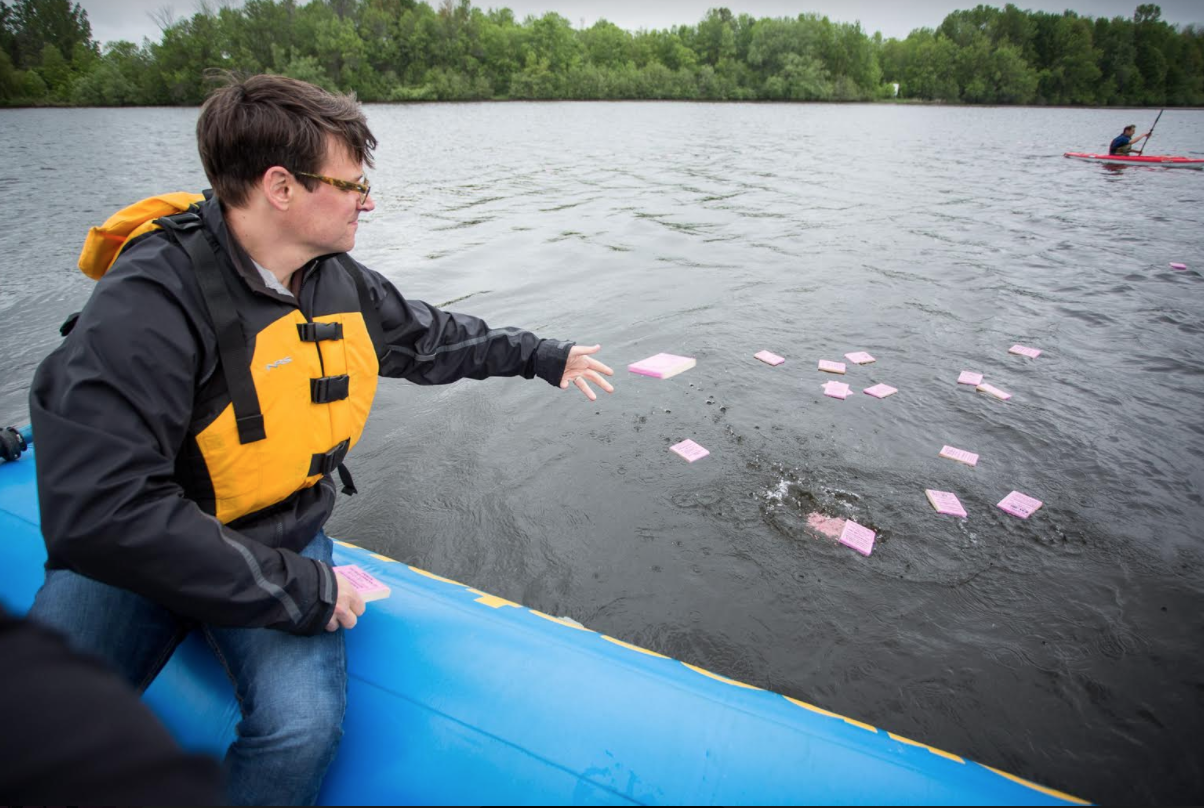 Environmental Defence's Dale Marshall drops little wooden cards into the Rideau and Bonnechere rivers on June 5, 2017, as part of a project to map the possible trajectory of an oil spill from the proposed Energy East pipeline. Photo by Alex Tétreault
Previous story
Next story

Environmental groups have set a fleet of wooden cards adrift in the Ottawa River to create a virtual map of how far oil leaked from the proposed Energy East pipeline could travel.

The hope is that when they're discovered, residents will follow instructions on the card to register its location online, creating a online map of where Energy East's oil could end up if leaked into the Ottawa River.

Data from the simulation will be used to produce a report on Energy East's likely spill trajectory, and compiled with data from sister simulations already underway in northwestern Ontario, other waterways in the Ottawa River watershed and the Bay of Fundy in New Brunswick, where Energy East aims to transport oil by tanker.

Some wooden cards from those simulations have already been picked up, either on land or caught in shoreline vegetation, said Environmental Defence's national program manager, Dale Marshall.

"I think in a lot of different places, there hasn’t been any study at all in terms of how quickly a spill would flow and where oil might accumulate," he told National Observer. "This (model) is by no means exhaustive — there are literally thousands of different water bodies that are going to be crossed by Energy East — but we wanted to pick a few important rivers."

Energy East, proposed by the Calgary-based TransCanada Corp., is the largest pipeline proposal in North American history. If built, it would cross some 3,000 lakes, rivers, streams and aquifers, as it carries up to 1.1 million barrels of oil per day from Alberta, Saskatchewan and North Dakota to refineries and marine ports in Quebec and New Brunswick.

Opponents argue the pipeline would put the drinking water of millions at risk, violate Indigenous sovereignty and push climate targets out of reach. Supporters say it will create thousands of jobs and get Canadian resources to tidewater safely under stringent regulatory frameworks.

The pipeline's list of adversaries grew this month, as La Fédération québécoise des municipalités (FQM) announced its opposition, based on TransCanada's failure to meet a list of its demands, and a lack of confidence in the National Energy Board's ability to assess the project thoroughly and objectively. FQM includes 1,000 urban and county municipalities representing 3.8 million citizens.

The federation says many of its members claim to have had negative interactions with TransCanada representatives, and believe that TransCanada has downplayed the authority of municipalities in urban planning, waterway management and public safety.

TransCanada did not respond to requests for comment on those allegations.

"I would say overall the general consensus is kind of a lack of transparency — certain cases where you’re told one thing and then you find out it’s something completely different," FQM's Scott Pearce told National Observer. "Sadly for (TransCanada), I think they started off on the wrong foot and I think they lost a lot of confidence early on in Quebec here. I put that on them to be honest, I don’t think we were being unreasonable."

Pearce, mayor of the Township of Gore and prefect for the Quebec Regional County Municipality of Argenteuil, added that the FQM's position was not a shot at Alberta in any way, and that FQM leaders sympathize with the plight of thousands of laid-off oil patch workers.

Their only concern, he explained, is the drinking water of their residents, which prompted FQM's demand that TransCanada create a $5-billion reserve fund to respond to a potential pipeline disaster, and expand its plans to protect every source of drinking water that could be impacted by a spill.

A pipeline mired in scandal

​TransCanada did not respond to requests for comment on this story, but told Le Devoir on Tuesday that as part of the rules governing interprovincial pipelines, it is required to demonstrate that it has the ability to pay in the event of a spill. Spokesperson Tim Duboyce further said the company is already developing rigorous emergency plans to protect water from a possible oil spill, but hopes never to have to use them.

The National Energy Board's federal review of the Energy East has been hampered by conflict of interest allegations, lawsuits and protests that collectively, prompted the regulator to hit the 'restart' button earlier this year.

In 2016, a National Observer investigation revealed that several of the regulator's panel members assigned to the Energy East project had met in secret with an industry representative who sought information on how to garner support for the pipeline in Quebec. That representative — former Quebec premier Jean Charest — was contracted by TransCanada at the time.

Hearings for the pipeline were suspended less than two months later a month amid concerns that the panel evaluating Energy East had been tainted by industry bias. Those panel members recused themselves and were reassigned. ​A new panel has since been appoint to evaluate the project, after an independent panel collects public feedback on how to structure hearings for the pipeline.

Thanks to Environmental Defence, Ecology Ottawa, and Les Citoyens au Courants for providing yet another example of science and fact trumping TransCanada's greed and deception (by their absence of similar studies).

In their application versions for Energy East, TransCanada can't determine and/or won't reveal how their proposed pipeline will cross major waterways.
They've used substandard parts for repairs, but apparently can't determine where they used them.
A TransCanada employee (Jean Charest) meets secretly with the NEB, but any further inquiry into the meeting is shut down. But the hearing has to re-start. (it's like asking jurors to ignore comments already heard, but stricken from the record).
Another TransCanada employee (Evan Vokes) gets fired for whistleblowing about substandard and dangerous faults in pipeline workmanship.

Apparently, TranCanada's last (if any) consideration is the damage to the environment and all the waterways the proposal will potentially affect.

TransCanada's application cannot be heard in isolation from their poor track record of operations, safety, maintenance; lack of honesty, transparency, and poor or non-existent landowner relations.

That it takes little wooden card studies undertaken by ED, EO, and CAC to illustrate the potential spill impacts, speaks volumes to the glaring inadequacies of their application to the NEB.