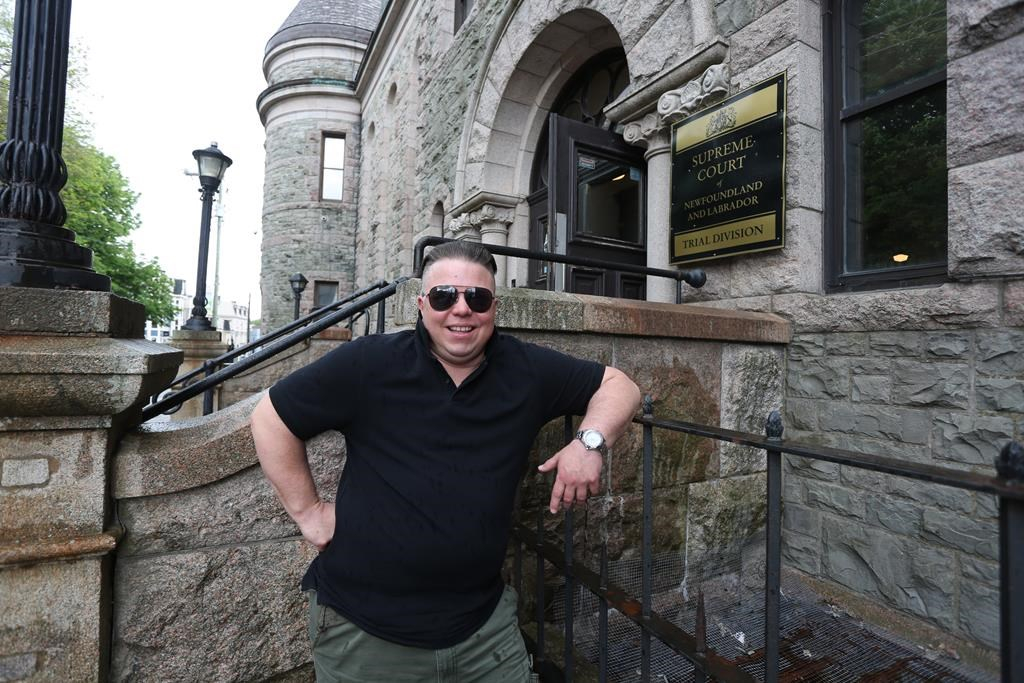 Gemma Hickey stands on the steps of the Supreme Court in St. John's NL on Friday, June 23, 2017. Photo by The Canadian Press/Paul Daly
Previous story
Next story

A transgender activist vying for a non-binary birth certificate is taking legal action against the Newfoundland and Labrador government as part of an effort to have a gender other than male and female formally recognized on such documents.

Gemma Hickey has filed an application with the province's Supreme Court in St. John's challenging the change-of-sex designation provision of the Vital Statistics Act, saying it is unconstitutional and violates provincial and federal human rights legislation.

"I have a responsibility to myself as a person and to others like me because we essentially are erased. We don't have any way to identify to show that we exist. It's a human rights issue," said Hickey in a phone interview Friday.

"I would like my birth certificate to include how I identify. That would make me feel more fulfilled as a person and give me that legitimacy that I don't have now."

Non-binary means the person does not identify as male or female.

Hickey applied for a non-binary birth certificate in April and is believed to be the first in Canada to do so.

On the change-of-sex designation form there were only two options — male or female — so Hickey wrote in "non-binary" and checked it off.

Hickey says Service NL is still considering the application, and Hickey is without a birth certificate in the meantime, as the original was submitted with the application.

The case will be in Newfoundland and Labrador Supreme Court on July 28 to set a date.

The application argues the Vital Statistics Act "is unduly onerous and discriminatory because it pathologizes gender identity, deviance and diversity."

Hickey has taken testosterone and is transmasculine, but identifies as non-binary.

Having to choose between male and female is discriminatory, said Hickey, and has led to uncomfortable situations.

"When I go away and travel, they see my name is Gemma and that there's a Ms. in front of it, and that leads to some embarrassing situations," said Hickey, who also runs a foundation to help survivors of sexual abuse.

"At one point I had a flight attendant argue with me because they thought I was in the wrong seat. These are situations that are embarrassing because there's other people around. It affects my mental health and the way that I see myself and takes a toll."

Hickey said since applying for a non-binary birth certificate, people from all over the world have reached out.

"They're thanking me because they identify as non-binary," said Hickey. "Even parents saying their kids are struggling with this and that they're grateful I'm taking the lead."

Joshua M. Ferguson, an Ontario-born filmmaker, applied last month to have a change of sex designation from male to non-binary. Currently, Ontario offers gender-neutral options for drivers' licences and health cards but not for birth certificates.

Ontario's minister of government and consumer services, Tracy MacCharles, said last month gender-neutral birth certificates could be issued in Ontario as early as next year, provided the province can work out bureaucratic hurdles involving other governments.

Earlier this month, the Senate passed a bill that protects Canadians from discrimination based on gender identity or expression.

She said Hickey's case is an important one, and she's not aware of any others like it in Canada.

"It's a very important cause and our firm feels strongly about promoting diversity, inclusion and equality," said Whalen, of Bob Buckingham Law.