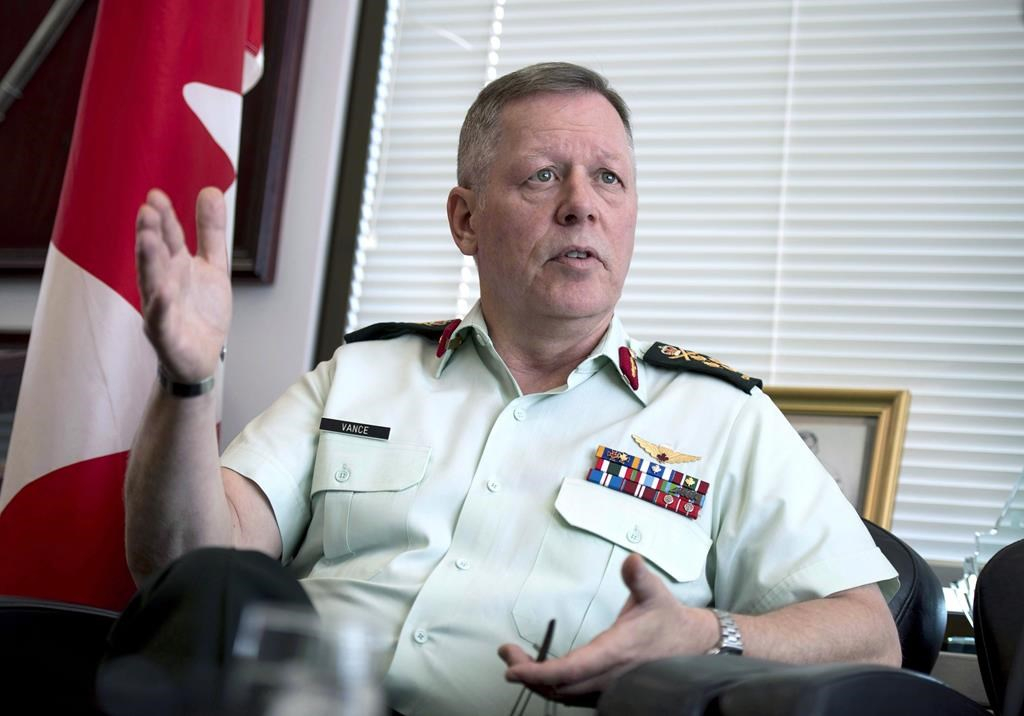 Chief of the Defence Staff Gen. Jonathan Vance is shown in his office in Ottawa on Thursday, June 8, 2017. File photo by The Canadian Press/Justin Tang
Previous story
Next story

Canada's top soldier is planning to issue a directive in the coming days encouraging military personnel to attend Pride events in uniform, as part of a larger effort to make the Forces more diverse and inclusive.

Chief of the defence staff Gen. Jonathan Vance's directive is expected to mirror a similar order that Royal Canadian Navy commander Vice-Admiral Ron Lloyd issued to his sailors this week.

"In an effort to epitomize diversity and inclusion," Lloyd wrote, "the (navy) encourages attendance to Pride events and authorizes the wear of uniform to participate in or attend the parade."

Lloyd went on to state that, effective immediately, navy personnel were no longer required to seek permission before being allowed to wear their uniforms to Pride events.

In an interview with The Canadian Press, Lloyd, who marched in last year's Pride Parade in Toronto, said he decided to take action after a recent meeting with members of the LGBTQ community.

"They were speaking to the fact that you needed chain-of-command approval in order to wear a uniform," he said.

"There is no reason why you should not be able to march in that parade in uniform if you should be so inclined. ... I didn't ask permission, and maybe I was supposed to. But it's about being inclusive."

"The Canadian Armed Forces recognizes that the strength of the team comes from the diversity of its people," Le Bouthillier said, "which is why participation in Pride parades is absolutely supported."

The Canadian military's history when it comes to LGBTQ issues is checkered, starting with the forced resignation of some service members because of their sexual orientation in the 1960s, '70s, and '80s.

Things began to change in 1992, when a high-profile case forced the military to lift its ban on members of the LGBT community serving in uniform, but there were still problems.

Since then, however, military leaders have adopted a zero-tolerance approach to sexual misconduct, and appear to have embraced the need to make the Forces open to Canadians of all backgrounds.

That includes not only members of the LGBTQ community, but women, visible minorities and indigenous peoples as well.

Alan Okros, an expert on diversity at the Canadian Forces College in Toronto, said there has been a recognition by senior commanders that diversity and inclusiveness are essential for military success.

Part of that is the moral need to better reflect the country and society it is sworn to defend, while it's also believed that such efforts will help with recruitment and make the Forces more effective on missions.

And making it easier for military personnel to attend public events, and encouraging them to do so, "becomes a visible symbol that the military is trying to get connected in the community," Okros said.