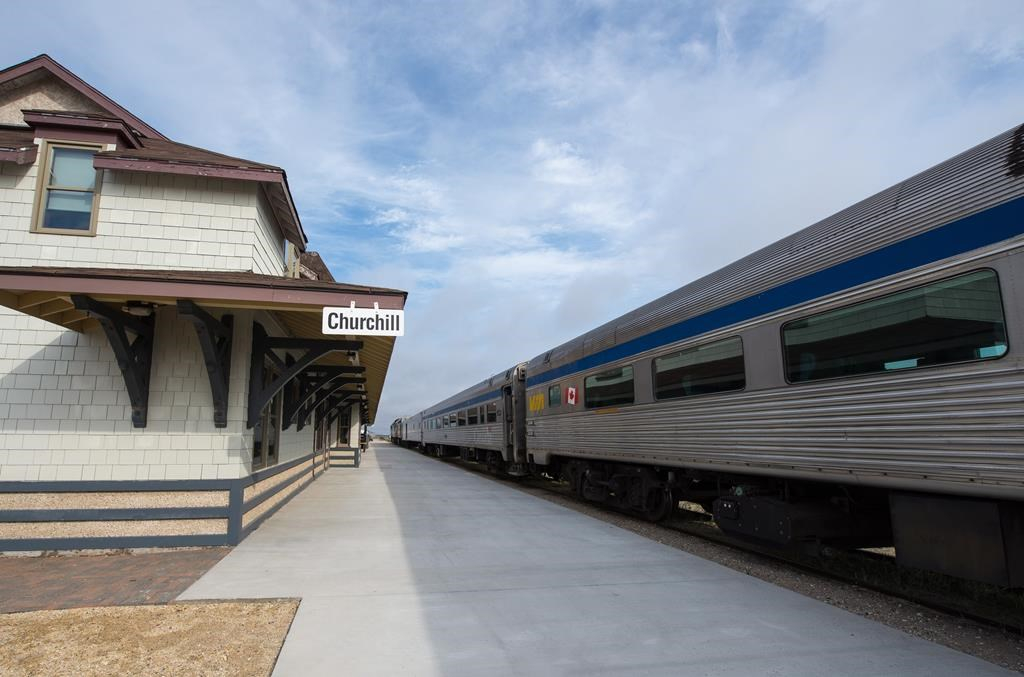 A VIA Rail train sits idle at the train station in Churchill, Man., on Thursday, June 22, 2017. File photo by The Canadian Press/Alex de Vries
Previous story
Next story

Most of the talk since rail service to Churchill in northern Manitoba was indefinitely interrupted by washouts and other track damage last month has focused on how to get goods and tourists in to the remote Hudson Bay community.

Via Rail has a different problem — how to get one of its trains out.

There are no roads or other rail lines to Churchill and the two locomotives and five passenger cars are sitting, silent, at the station.

The track is the only land connection between the outside world and Churchill — a popular tourist destination famous for its polar bears and beluga whales.

"Options to retrieve that (train) are being evaluated at this time," Via spokeswoman Mylene Belanger said.

Belanger wouldn't say what those options might be. Each of the locomotives weighs 107 tonnes.

A part-time maintenance person in Churchill inspects the train and runs it periodically, she added.

Train service has been suspended for weeks due to flooding that rail line owner Denver-based Omnitrax Inc. says has resulted in "unprecedented and catastrophic" damage likely to take until next spring to repair.

Omnitrax, which has been losing money on the line and has been trying to sell it, has said it has yet to get on the ground and fully inspect the almost-300 kilometres of remote track.

Chief commercial officer Peter Tousenard said in an emailed statement that Omnitrax, too, has a number of rail cars in limbo in Churchill.

"We understand Via is looking at options to ship their passenger cars and locomotive out by barge through the port, and we are working with them to find a solution that will meet their needs," Tousenard said.

Belanger wouldn't confirm if shipping the train out by barge is under consideration.

Francois Gaudreau with Nunavut Sea Link Supply-Desgagne Trans-Arctik, which provides shipping services in the region, said the company has ships capable of moving something as large and heavy as locomotives. The ships have cranes that could lift the locomotives and cars on board.

But Gaudreau said there are numerous other challenges to moving the rail stock.

"They would have to be brought alongside our vessel because there's a certain reach of the cranes," Gaudreau said.

A ship with his company is scheduled to arrive in Churchill on July 10, he said. There are no plans to load a train.

Churchill already has a collection of large, immovable machines.

The MV Ithaca is a large cargo ship that has sat, beached and rusting, since it ran aground more than 50 years ago.

There's also a twin-engine Curtiss Commando cargo plane, known locally as "Miss Piggy" for its freight capacity, in the middle of a rocky field, where it ended up after developing engine trouble in 1979.

Tousenard said Omnitrax isn't planning to move its own rail cars out of Churchill. The company is looking at using some of the cars, particularly the tank cars, as an additional fuel storage option for the town.

The Manitoba government has said it is considering bringing in extra propane storage units and converting some homes to electricity to help people in isolated Churchill get through next winter.