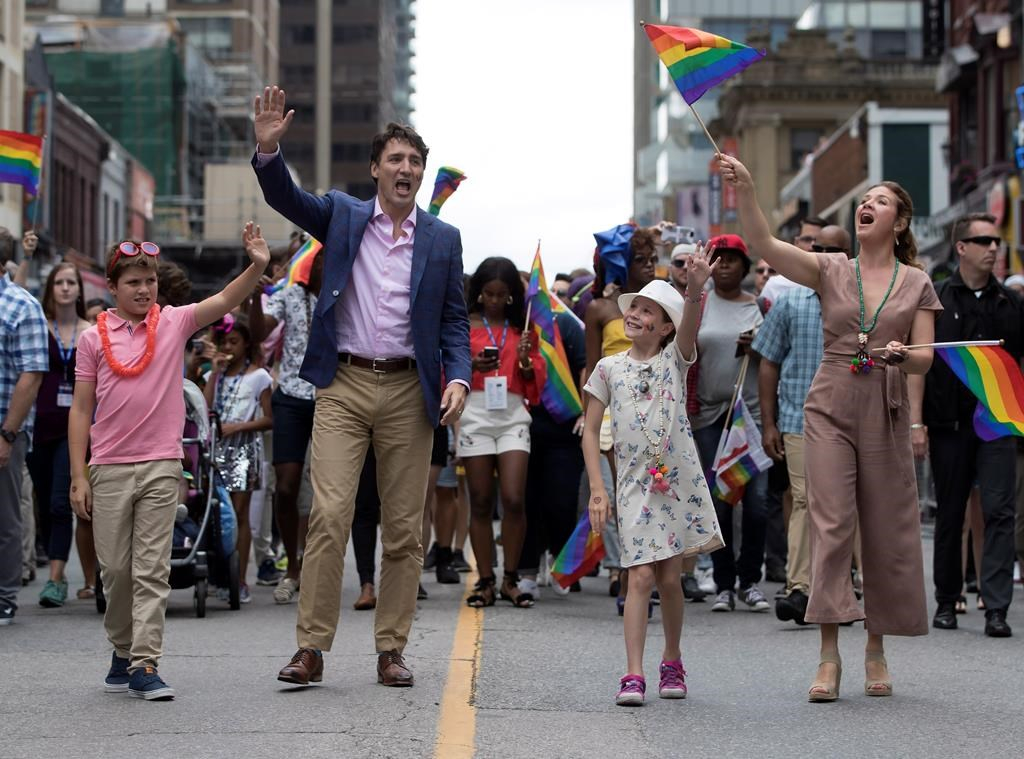 Prime Minister Justin Trudeau, his wife Sophie Grégoire Trudeau and their children Ella-Grace and Xavier walk in the Pride parade in Toronto on Sun. June 25, 2017. Photo by The Canadian Press/Mark Blinch
Previous story
Next story

Thousands cheered on Toronto's annual Pride parade Sunday and waved rainbow flags, though continued debate over the exclusion of the city's police force swirled amid the colourful procession that weaved its way through the downtown core.

Prime Minister Justin Trudeau, his wife Sophie Grégoire Trudeau and Ontario Premier Kathleen Wynne were among the dignitaries who were marching in the procession. Trudeau was casually dressed in a blue blazer and pink shirt, with a temporary tattoo of a rainbow-coloured maple leaf on his left cheek. He waved at the thousands of people who lined both sides of the parade route down Yonge Street, frequently yelling out, "Happy Pride!"

"It's all about how we celebrate the multiple layers of identities that make Canada extraordinary and strong," Trudeau told reporters before the parade started.

Sophie Grégoire Trudeau waved a rainbow flag, one of the symbols of the LGBTQ community. Two of the Trudeaus' children were marching along with their parents.

Multi-coloured streamers and Canadian flags hung from some balconies along the parade route, and many people watched from rooftops along Yonge Street as the parade went by below. The event started under cloudy skies and sporadic rain, but the sun came out toward the end of the event.

Police officers were still present as security guards, but there was continued talk Sunday over the decision by organizers to keep the Toronto police float and uniformed officers out of this year's parade.

Toronto pastor and prominent gay activist Brent Hawkes touched on the issue when he opened Toronto Pride with his final service, emphasizing the importance of making everyone feel welcome.

"Inclusion is the core value in our community and as long as a group or a company supports LGBT equality, then in my opinion, welcome aboard," he said.

Organizers should not be able to tell people what to wear at Pride, Hawkes added.

"Because I probably wear a uniform that represents the group that has done the most damage to the LGBT community — the Christian Church," he said. "So I would say don't ban what's offensive to some, reform it to the benefit of everyone."

In January, organizers agreed to a list of demands issued by the Toronto chapter of Black Lives Matter, which included the police ban.

The issue first came to widespread public attention during last year's parade, when members of the anti-racism group staged a sit-in that halted the march until Pride organizers agreed to a list of conditions.

Black Lives Matter has argued that allowing uniformed officers at the parade could discourage marginalized communities from attending.

Barry Trenthan, who marched in this year's Toronto Pride with Rainbow Railroad, a group that helps LGBT people living in countries with anti-gay laws, has attended Pride for the last 30 years. He said he has mixed feelings about the decision to bar the police. "I remember when there was no way police would be a part of it publicly," he said, adding that it felt like a "coup" to get their approval. But police support isn't meaningful "if not all of us are supported," he said.

Toronto Mayor John Tory, who was also taking part in the parade, expressed hope a solution would be found well before next year's event.

"Any time anybody is excluded it can't be a good thing," Tory told reporters. "We've got to get it resolved, we'll resolve it in the Toronto way, which is by talking about it and I'm very optimistic that it will be resolved in time for next year."

In response to the ban on police floats and uniformed officers, a group from Toronto police took part in the pride parade in New York City.

For many attendees, the parade itself was the central focus of the day. Lucky Vincent Bersales, who grew up in the Philippines, marched for the first time in this year's parade, wearing a floor-length blue dress with diamond accents. "I love Toronto," said Bersales, who describes himself as a cross-dresser. "They accept me for who I am and what I am, and that's what I'm proud of. This is the first time I love myself."

Black Lives Matter didn't hold up the Toronto parade this year, but did stage a protest down the parade route after Pride had wound down. Members of the group also held a similar demonstration in downtown Vancouver.

Perry Bellegarde of the Assembly of First Nations also took part in this year's event, making him the first National Chief to participate in a Pride event.

Trudeau to march in Toronto Pride Parade for a second time