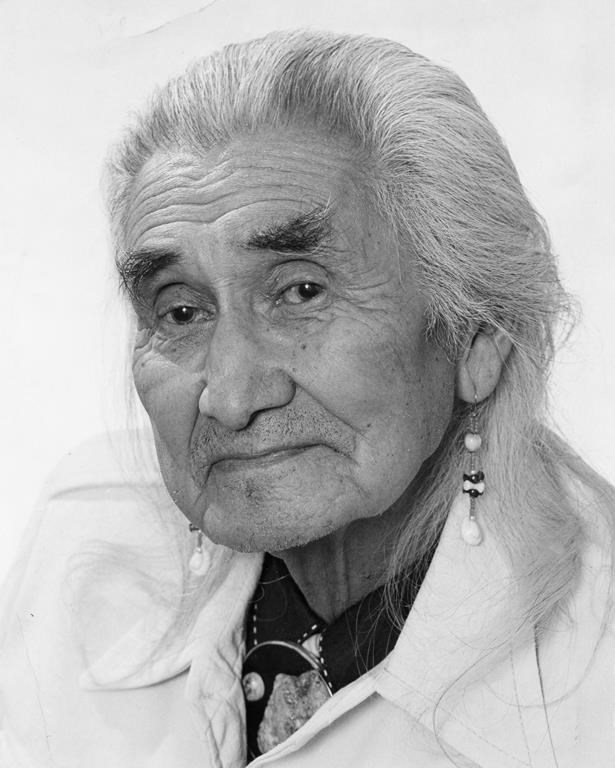 Chief Dan George of the Tsleil-Waututh First Nation in British Columbia is shown in an undated handout photo. Handout photo by The Canadian Press
Previous story
Next story

Leonard George remembers the first time he heard his father, Chief Dan George, deliver his moving and prophetic speech on Indigenous rights, "A Lament for Confederation."

It was 1967 and the acclaimed actor and former Tsleil-Waututh chief was set to speak at Canada's centennial celebration in Vancouver. His wife had urged him to write something about what the day means to First Nations, says Leonard.

When his soliloquy was ready, he stood in the family's living room and read it aloud.

"We all applauded because it was so beautiful and so powerful," says Leonard, 70.

They weren't sure, however, that the crowd of 32,000 at Empire Stadium would do the same. The speech forcefully critiques colonization and calls on Indigenous people to "grab the white man's instruments of success" to rise again.

"Dad and the whole family were very nervous," says Leonard. "To stand up and tell the truth in such a profound way, he had no idea how the public would take that."

George rehearsed every night for two weeks, along with his adult children, who were set to join him on stage. When the day finally came, Leonard could not have predicted how the audience would react.

After his father finished speaking, there were a few seconds of stunned silence. Then the audience rose to their feet and filled the stadium with about 10 minutes of deafening applause.

"He began to cry because he was so touched," Leonard recalls. "We were crying as well, and we held on to each other."

The speech came at a time when George was a powerful figure in an emerging aboriginal rights movement. He helped bring shameful parts of Canada's history out of the shadows and inspired young Indigenous leaders, says one researcher.

"I think he spoke both to their oppression and their rights and to their resiliency and their future," said Hugh Shewell, a professor with expertise in Indigenous-state relations at Carleton University in Ottawa.

As Canada celebrates its 150th birthday, George's family and friends are urging Canadians to reflect on his words. They say while the government's treatment of Aboriginal Peoples has not changed much, First Nations themselves have risen up in many of the ways he predicted.

The speech begins on a mournful note: "Today, when you celebrate your hundred years, oh Canada, I am sad for all the Indian people throughout the land."

Dan George recalls Canada "when your forests were mine," when they gave him meat and clothing and when fish flashed in abundant rivers and streams. But in the long hundred years since the white man came, he says he has seen his freedom disappear.

"When I fought to protect my land and my home, I was called a savage. When I neither understood nor welcomed this way of life, I was called lazy. When I tried to rule my people, I was stripped of my authority," he says.

The speech ends with a call to rise again, like "the thunderbird of old" and to seize the white man's education and skills. It predicts young braves and chiefs will sit in the houses of government and law.

"So shall the next hundred years be the greatest in the proud history of our tribes and nations," it concludes.

George's address was so revolutionary, his daughter Amy George recalls, she feared he would be killed for delivering it. She was in her 20s and the assassination of U.S. president John F. Kennedy was fresh in her mind.

"Some people did get very angry, too. When we were walking off the field at the stadium, some people were saying 'You're nuts!' and they were throwing bottles and empty cups at us," she says.

There hasn't been much improvement in how Canada treats First Nations since George's speech, says his grandson Rueben George. He points to disproportionately high numbers of Indigenous kids in government care and inadequate funding for housing, education and clean water on reserves.

But just as his grandfather envisioned, Indigenous people are sitting in the House of Commons and the courts, and have a say in resource projects on their lands, says Rueben.

"We took back what is ours. That's our identity, our culture, our spirituality...our law," he says.

Later in 1967, singer-songwriter Ann Mortifee performed with George in a groundbreaking play, "The Ecstasy of Rita Joe," about a young aboriginal woman. Mortifee, who was 20, says George opened her eyes to the brutality of colonialism.

"I feel profoundly privileged to have lived through that moment in history," she says. "He was like a portal into a richer world for me and he changed my life."

For many, Canada 150 celebrations pale in comparison to nostalgia of Expo 67

Where's the speech? Since not

Where's the speech? Since not even a link, I searched and found a copy in the Cape Breton Post. Powerful & moving! Interesting that the CBP speech reprint begins "How long have I known you, Oh Canada? A hundred years? Yes, a hundred years. And many, many ...."