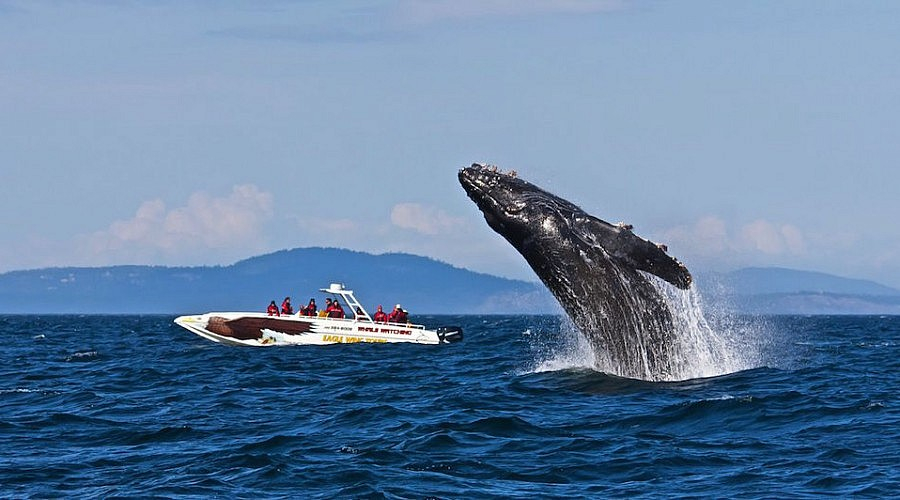 Migratory species, like the humpback whale pictured above, are among the species at risk from a proposed increase in oil and gas exploration in the Laurentian Channel. Photo courtesy of Eagle Wing Whale & Wildlife Tours
Previous story
Next story

A Trudeau government plan based on "scientific opinion" will allow oil and gas exploration in the Gulf of St. Lawrence, in the middle of a proposed protected area.

Fisheries and Oceans Canada has proposed regulations that would allow oil and gas exploration in a marine protected area (MPA) it plans to establish in the Laurentian Channel, a deep submarine valley more than 1,200 kilometres long that runs through the Gulf of St. Lawrence to the edge of the continental shelf off of Newfoundland and Labrador.

The department is currently seeking public feedback on the proposal, but environmental and social advocacy groups, including The Council of Canadians, WWF-Canada, the Canadian Parks and Wilderness Society, and Sierra Club Canada Foundation believe oil and gas exploration permits could do permanent damage.

At a press conference in Whitehorse on Wednesday, Fisheries Minister Dominic LeBlanc defended the plan and told a journalist that the government had based the proposal on "scientific opinion," Le Devoir reported. LeBlanc said the government wouldn't do anything that goes against scientific advice.

The Laurentian Channel is home to a variety of species at risk, including the leatherback sea turtle, Northern Wolffish and North Atlantic right whale, along with migratory whales including minkes and humpbacks. Six dead North Atlantic right whales were found in the Gulf of St. Lawrence earlier this month, and while their cause of death remains a mystery, scientists are discouraging any human activity that poses further risk to their dwindling numbers.

"(The oil and gas exploration proposal) violates the spirit and the definition of what exactly a Marine Protected Area is — an area that due to the types of species and its ecological significance, requires protection as set out in the Oceans Act," said Sierra Club Canada Foundation's national program director Gretchen Fitzgerald in a Wednesday press release.

"It means — in practice and not just on paper — that marine life are shielded from the very industrial activity they would now consider allowing to occur. Permitting oil and gas exploration in this area doesn't make any sense. It is the exact opposite of 'protecting.'"

Fisheries and Oceans Canada, however, argues that its new regulations will protect the most vulnerable species from harm tied to human activity, while promoting economic growth.

"The regulations aim to conserve, protect, and restore the biodiversity of the Laurentian Channel from risk of harm from human activities," said department communications advisor Vance Chow in an e-mail to National Observer.

"Any new project would be subject to Canada’s rigorous environmental assessment process. Only activities that are determined to be compatible with the conservation objectives would be allowed to continue."

The federal department has already established a Marine Protected Area with similar regulations. The Tarium Niryutait MPA, established in 2010 in the Arctic on the Beaufort Sea also allows for oil and gas exploration, although there is no active drilling at the moment.

If the Laurentian Channel MPA is approved, Chow said that oil and gas activities will be prohibited within the core protection zone, ensuring the protection of areas with high coral and sea pen concentrations. He added timing of seismic activities in other parts of the proposed MPA would also be limited to protect migratory species while they are present.

Government argues animals can swim away

In a federal announcement of the proposed regulations, DFO argues that underwater animals will be able to move "away from noises and disturbances" associated with oil and gas exploration. Unlike coral, says the document, these creatures "are mobile," and therefore "the effect of oil exploration and production on fish, marine mammals, and sea turtles is considered reversible ..."

Results from environmental effects monitoring programs from Newfoundland and Labrador offshore oil and gas production have shown no significant adverse effects on marine wildlife and habitats, the department added in its announcement. The government also argues the risk of oil spills and blowouts is "limited" since the proposed protected area is not located over a viable underwater oil field.

But environmental groups say the government's arguments are fundamentally at odds with its own conservation objectives.

A recent study in the weekly international science journal Nature revealed the intense acoustic signals generated by oil and gas exploration cause significant damage to zooplankton, and harm every animal that relies on these microscopic organisms for food, including top predators. The devastating effects of noise pollution on whales, which rely on sound for hunting, mating, feeding and play, are also well-documented.

"People would not consider that oil and gas exploration or forestry tree-cutting or any sort of large industrial-scale activities would be compatible with a national park on land. In our view, we need to extend that level of protection to our marine protected areas."

The proposed 11,619-square kilometre marine protected area on the Laurentian Channel, located between Newfoundland and Cape Breton Island, aims to preserve vulnerable marine life that the federal government has promised to protect under the international Convention of Biological Diversity.

It's an area approximately twice the size of Prince Edward Island and would be Newfoundland's third protected area.

Canada has committed to protect at least 10 per cent of its ocean territory by 2020 and has set a target of five per cent by the end of 2017. As of today, only 1.54 per cent of Canada’s ocean territory is protected based on the international convention's definition, according to the government.

Under the proposed regulations, commercial and recreational fishing would be prohibited.

By Mark Leiren-Young | Analysis, Energy | September 26th 2016
Reports from the Race to a Safer World

By Mark Leiren-Young | Opinion, Energy | September 1st 2016
Reports from the Race to a Safer World

This government has a

This government has a propensity for speaking out of both sides of its mouth.

To be transparent as it repeatedly and erroneously claims it is, this government needs to identify the "scientists" attributed to the "scientific opinion" they have based their decision on. Only then can the veracity of the scientists "qualifications" be known.

How likely could one surmise that these scientists' curricula vitae illustrate associations with the oil and gas industry, and/or the governing party?

I don't know why this

I don't know why this government is insisting upon further oil and gas projects. We want to get away from fossil fuel. So why even bother with these ideas, especially drilling in the ocean bed. I think they have lost connectivity with the reality of our Era and where as a species our goals are towards renewable resources.