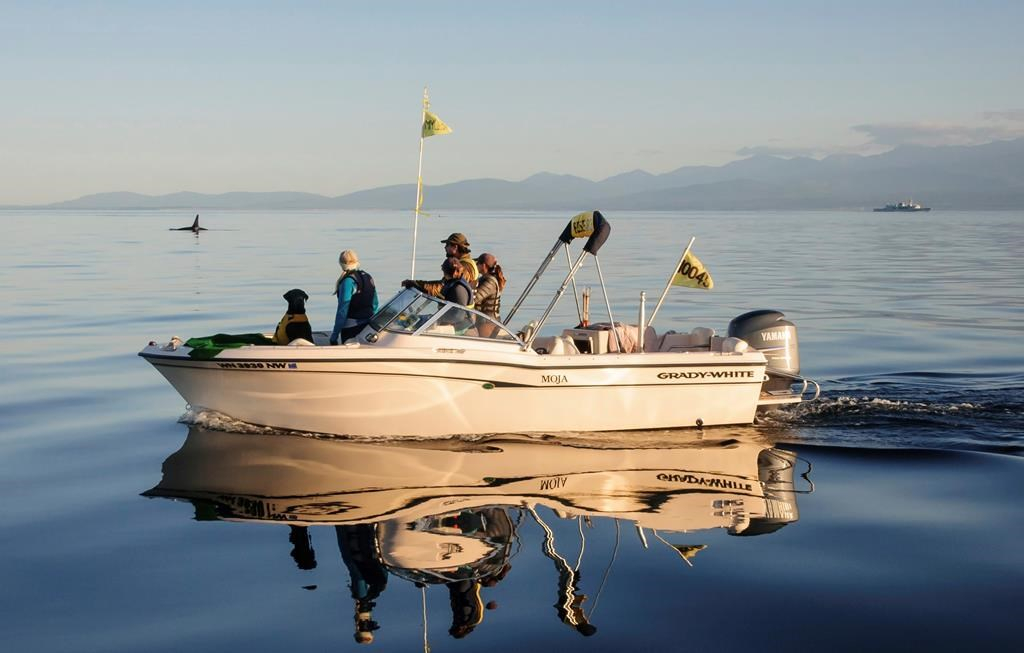 Endangered killer whales that frequent the inland waters of Washington state are having pregnancy problems because they cannot find enough fish to eat, according to a new study.

Researchers analyzed hormones in excrement collected at sea and found that more than two-thirds of orca pregnancies failed over a seven-year period. They linked those problems to nutritional stress brought on by a low supply of Chinook salmon, the whales' preferred diet.

"A large number of whales are conceiving, but when nutrition is poor, they don't sustain those pregnancies," said Sam Wasser, lead author of the paper and a biology professor at the University of Washington.

Southern resident killer whales along the U.S. West Coast have struggled since they were listed as endangered species in 2005. They now number just 78, down from a high of 140 decades ago. The whales face threats from a lack of food, pollution and boats.

The new study, to be published Thursday in the journal PLOS ONE, zeroes in on food supply as an important stress factor among these fish-eating whales. Unlike other killer whales that eat marine mammals, the orcas that spend the summer in Puget Sound primarily eat salmon, mostly Chinook.

Many species of Chinook salmon along West Coast are listed as threatened or endangered due to a host of factors, including loss of habitat from urban development, dams, fishing, pollution and competition from non-native fish.

Toxins that accumulate in the whales' fat and are released when the animals starve and metabolize that fat also play a role in the pregnancy problems.

"Food is the driver. But what we can't yet say is how much of that then is affected by its interaction by toxins," Wasser said, adding that there were not enough samples to say how influential the toxins are.

Using dogs trained to sniff out whale poop, a team of scientists collected nearly 350 excrement samples from 79 unique whales in inland waters of British Columbia and Washington state between 2008 and 2014.

Back in the lab, they analyzed it for the hormones progesterone and testosterone and assessed whether the orca was pregnant and at what stage. They also used DNA to determine the identity, sex and family line of the whale. A pregnancy was deemed successful if the female whale was later observed with her calf.

Their analysis showed 35 orca pregnancies between 2008 and 2014. Eleven calves were spotted with their mothers in successful births. Puget Sound orcas are individually identified and intensely tracked, so researchers know when calves are born to one of three families of orcas, known as the J, K and L pods.

The study found 24 unsuccessful pregnancies. No calves were seen in those cases, indicating that the whales lost the babies or the calves died shortly after birth. Those females showed signs of nutritional stress — more so than those who gave birth successfully.

Researchers also recorded the number of boats in the area when collected the whales' scat. They studied two hormones that play important roles in physiological stress and were able to differentiate between stress from poor nutrition and stress from boat traffic.

The team compared the hormone data to abundance records of two Chinook salmon runs in the Pacific Northwest.

The data over time suggest the orcas experienced periodic nutritional stress, partly caused by variation in the timing and strength of the salmon runs in the Columbia and Fraser rivers, the study said.

"I think it's fair to call out nutrition as a major stressor for these guys," said Joe Gaydos, a wildlife veterinarian and science director of SeaDoc Society, who was not involved in the study.

Transient resident whales that feed on marine mammals confront similar boat noise and pollution but haven't had the same kind of pregnancy problems as the fish-eating whales.

But Gaydos added that nutrition or food can't be viewed independently of other factors. Noise, boats, food availability and toxins are all interrelated. He said the study shows the need to take as many actions as possible to save the iconic creatures.