Canada is not about 'bricks and mortar,' PM tells critics of Canada 150 choices 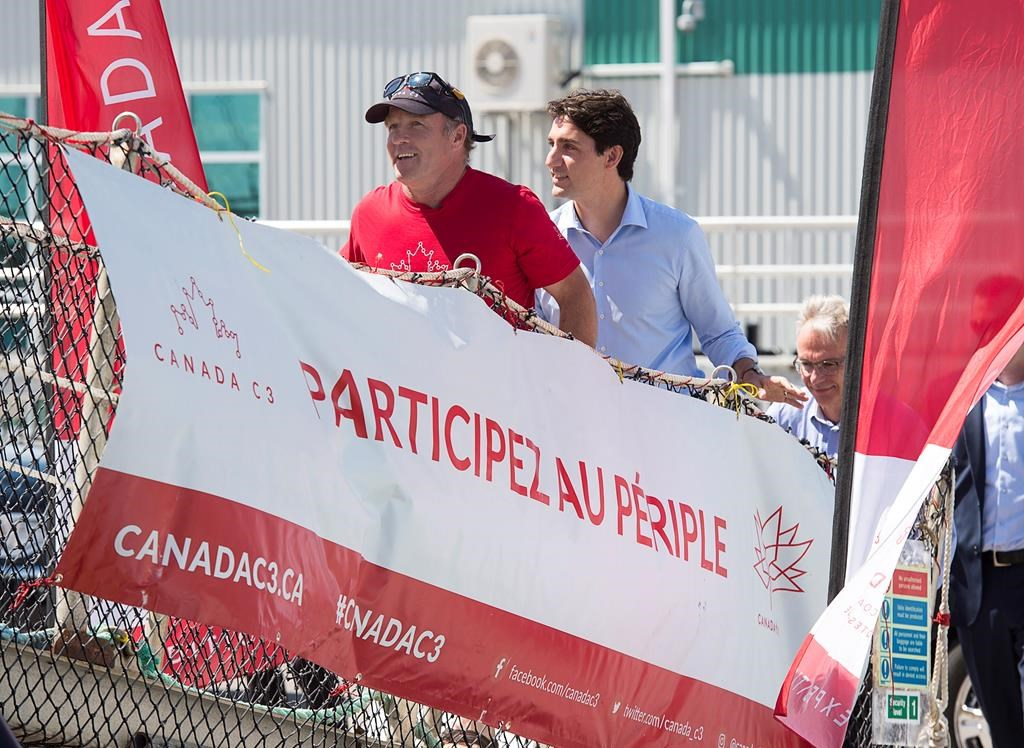 Justin Trudeau pointed Thursday to an icebreaker's voyage as a fine example of Canada 150 celebrations, but critics say he's missed the boat in terms of a lasting, bricks-and-mortar legacy from the anniversary.

The prime minister clambered onto the former coast guard ship Polar Prince to talk to scientists who are collecting information on the oceans off three Canadian coasts this summer.

He also encountered aboriginal crew members from the Canada C3 expedition in a small room dedicated to reconciliation, and posed for hundreds of selfies as he toured P.E.I and New Brunswick in the run-up to the Canada Day weekend bash.

Trudeau told a news conference that his government has focused on people rather than buildings in Canada 150.

"I respect that people will be looking for different things to mark this milestone but I always focus on Canadians, on the stories we tell each other," Trudeau said, as he stood near Charlottetown harbour.

However, Elsa Lam, the editor of Canadian Architect magazine, said in an interview the anniversary has been short on the enduring, landmark structures that marked the 1967 Centennial.

Other than an ongoing renovation to the National Arts Centre in Ottawa, the architectural historian said she can't think of many projects that may be remembered by the time the 200th birthday rolls around.

"There's a whole smattering of tiny infrastructure projects that aren't really legacy projects," she said in an interview.

The country could have aimed to bring in a new museum for the City of Toronto, renovated the prime minister's residence to make it a model of green architecture, or have moved more quickly to create a national indigenous cultural centre, she says.

Centennial investments in 1967 funded some 860 buildings, including the National Arts Centre in Ottawa, the Ontario Science Centre in Toronto, the Arts and Culture Centre in St. John’s, N.L., and the Centennial Concert Hall in Winnipeg.

Asked about the criticisms during a news conference, Trudeau said he makes no apologies for the approach his government has made with its $500 million anniversary investment.

"Our greatest strengths are not in bricks and mortar or even in the land, but in the people who share these communities who want to build a vibrant future together," he said.

"Our government makes no apologies for the investments we made in Canadians themselves."

The prime minister pointed to funds that are giving families the opportunity to celebrate at events around the country.

Some of the federal funds have gone to fund "12 days of celebrations" that kicked off June 21.

That was National Aboriginal Day, the first of four key events including Saint-Jean-Baptiste Day on June 24, Canadian Multiculturalism Day on June 27 and Canada Day on July 1.

Canadian Heritage has set the bar high for their success: "In honour of Canada 150, this year’s edition will be the most spectacular in Canadian history," promises one government press release.

However, Lam says there was no long-term vision for the anniversary, an issue that extended back five years ago to the Harper government as well.

"It was kind of catch-all the way the program was framed. You could submit proposals for cultural centres ... but also submit for renovations to a cemetery or golf course or hiking trails. It was so broad in scope that anything could fit in."

She said much of what was chosen was "shovel-ready" projects, rather than larger structures.

"This is something that should have been started a lot earlier."

Earlier Thursday, Trudeau and P.E.I. Premier Wade MacLauchlan sat outside a resort near Cardigan, where the prime minister told him he often hears from "fiercely proud" Island MPs in his caucus on a variety of issues, including the high cost of crossing the Confederation Bridge to the mainland.

People gathered at the Montague Curling Club ranged from Cardigan MP Lawrence MacAulay to monks from a local Buddhist community.

In the afternoon, Trudeau flew to Fredericton to meet athletes taking part in the Acadian Games.

As with his visit to the Island, he spent about 40 minutes working his way through crowds of excited and screaming teenagers.

Many wanted his autograph, but most were pushing close with their smartphones to get the prime minister to pose for selfies with them.

"It's really cool because he's our prime minister and we get to meet him," said Sophy Lemieux, a 15-year-old badminton player from Greenwood, N.S.

"It's really cool I got a picture with him," she said.

Trudeau ended the day at an ice cream social in the Saint John, N.B., suburb of Grand Bay-Westfield, along with a few hundred party supporters.

"This is an extraordinary country. We have so much to celebrate in our past and for our future," he told the crowd.

It will be Scheer's first visit to New Brunswick since becoming leader.

— With files from Kevin Bissett in Fredericton