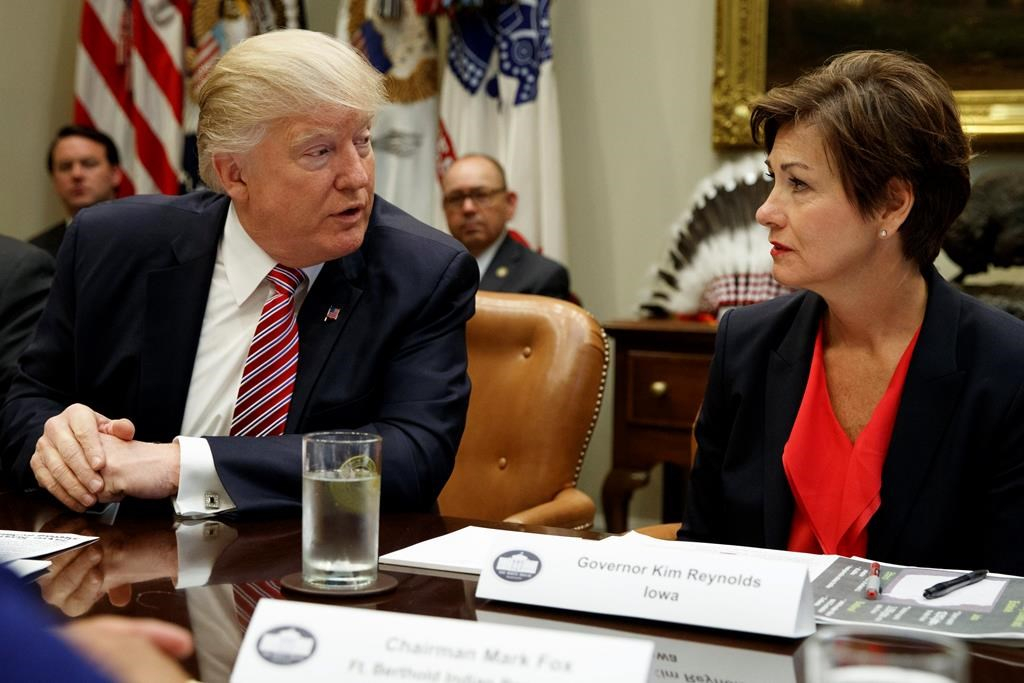 Iowa Gov. Kim Reynolds listens as President Donald Trump speaks during an energy roundtable with tribal, state, and local leaders, on June 28, 2017, in the Roosevelt Room of the White House in Washington. Photo by The Associated Press/Evan Vucci
Previous story
Next story

The Trump administration said Thursday it is taking steps to expand oil drilling in the Arctic and Atlantic oceans as President Donald Trump continues to push for U.S. "energy dominance" in the global market.

The Interior Department is rewriting a five-year drilling plan established by the Obama administration, with an eye toward opening areas in the Arctic and Atlantic oceans that now are off-limits to drilling. It's one of six initiatives that the president unveiled Thursday in hopes of generating more energy exports and jobs.

U.S. oil production has boomed in recent years, and exports of oil and natural gas are surging, primarily because of improved drilling techniques such as fracking that have opened up production in previously out-of-reach areas. Trump has pledged to ramp up production further, withdrawing from the Paris climate change agreement because of the limitations that it could have placed on the burning of fossil fuels.

While Trump has promised that the initiative will create millions of jobs, the energy sector employs fewer workers than it did a decade ago despite the recent boom. The Labor Department said there are 655,300 jobs in mining coal and extracting oil and natural gas, down from a peak of 1.18 million jobs in 1981.

As the administration celebrated a self-proclaimed "energy week," Trump said more steps are needed to "unleash" domestic reserves and remove government regulations that could prevent the U.S. from achieving global dominance in energy.

Trump and other officials say they are confident the country can pave the path toward energy dominance by exporting oil, gas and coal to markets around the world, and promoting nuclear energy and even renewables such as wind and solar power.

The president said Thursday that his administration has also approved construction of a new petroleum pipeline to Mexico. He said that Sempra Energy signed an agreement to negotiate the sale of natural gas to South Korea and that the Energy Department is approving two applications to export natural gas from a Louisiana terminal. His administration will also perform a complete review of nuclear energy policy and seek to address barriers to financing coal plants overseas, as well as expanding offshore drilling.

Trump signed an executive order in April to expand oil drilling in the Arctic and Atlantic oceans, reversing restrictions imposed by President Barack Obama. Trump has also pushed to revive U.S. coal production after years of decline. Coal mining rose by 19 per cent in the first five months of the year as the price of natural gas edged up, according to Energy Department data.

A report released in January by the Energy Information Administration said the country is on track to become a net energy exporter by 2026, although the White House said Tuesday that net exports could top imports as soon as 2020.

Any DSM-5 categorization of

Any DSM-5 categorization of the POTUS?