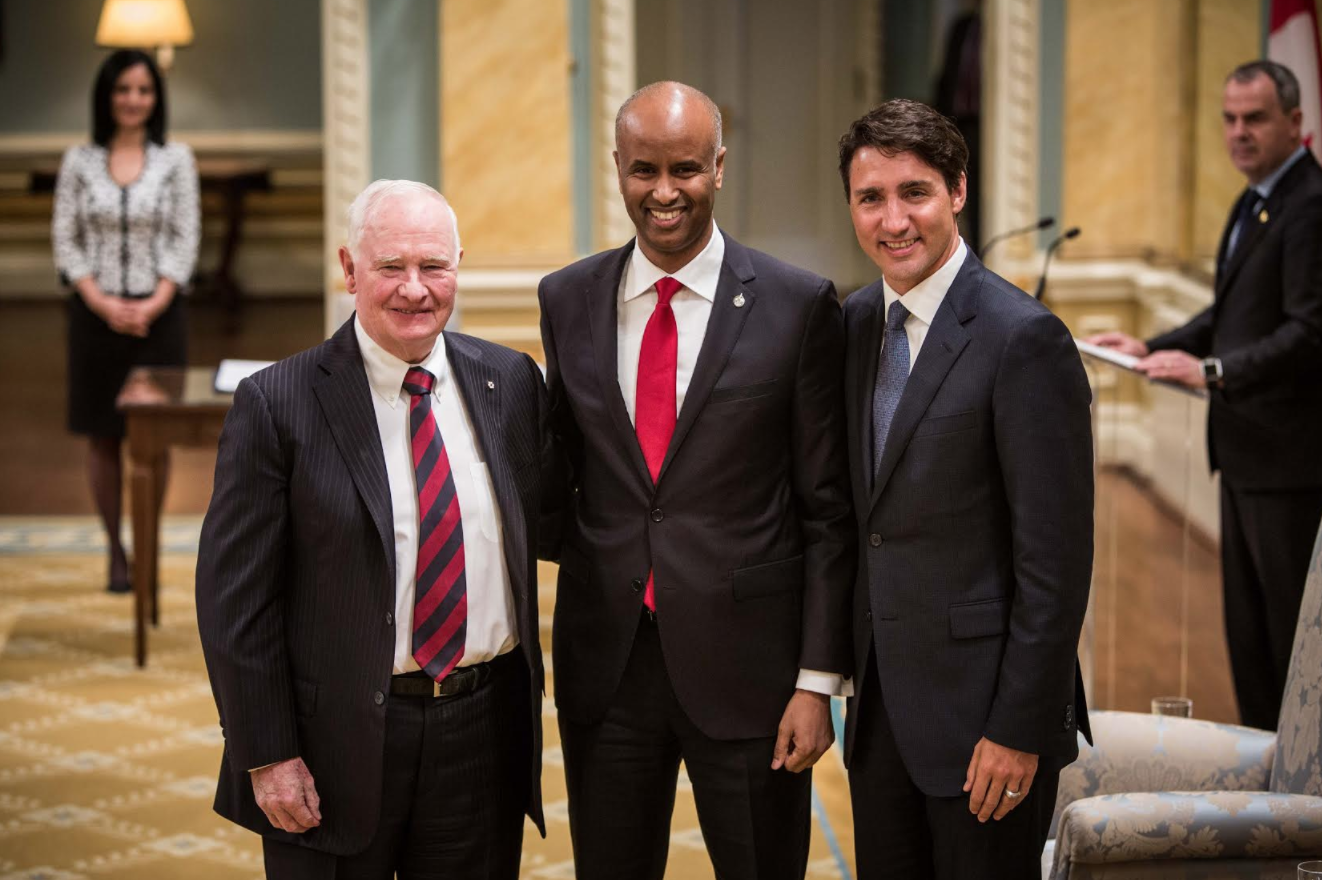 Ahmed Hussen (centre) is sworn in as the federal immigration minister alongside Governor General David Johnston and Prime Minister Justin Trudeau at Rideau Hall in Ottawa on Jan. 10, 2017. Photo by Alex Tétreault
Previous story
Next story

Ottawa’s bid to improve the way extended families are reunited in Canada has backfired, leaving thousands of relatives upset and their lawyers frustrated.

More than 95,000 families registered this winter for a new lottery system that was supposed to fast-track the immigration of 10,000 parents and grandparents, but the adapted program fell far short of its intended target. As of mid-June, only 700 had actually applied and the federal government has now suggested a second lottery may be needed later this year to fill the immigration quota.

“It’s a complete mess,” said Elizabeth Wozniak, an immigration lawyer in Halifax. “They wanted to make it more equitable for everyone, but they took something that was actually working and now it doesn’t.”

A sudden change of rules

George Samara is one of the Canadians who was left frustrated and upset by the new lottery system. He tried to sponsor his 73-year-old mother, Salma Samara, for permanent residency late last year, when all of a sudden the rules changed.

“We are doing well. We have been blessed in Canada," he told National Observer. "This is our home now. We are blessed, but why does the government not allow families to come together?”

Samara is president of the Canadian Lebanon Society of Halifax and came to Canada in 2009. He now lives in Halifax, and says he has built a good life with his wife and three boys.

But just before he started filling out forms to bring his mother to Canada last year, the government changed the system. Instead of taking the first 10,000 applicants who applied on January 2, as it had for the last three years, in December 2016 the government decided to hold a lottery to see who would be allowed to apply.

Families entered the lottery with a simple online form that was open until February 2. The government received 95,000 online entries. In late April, the government sent official invitations to apply to 10,000 families — and 85,000 rejection letters, according to statistics from Immigration, Refugees and Citizenship Canada (IRCC).

Samara got one of the rejection letters.

“Why force my mother to stay in Lebanon?” he asked. “It’s unfair. If I have the income, if I qualify and meet all the rules, I should be able to bring her in.”

Parents and grandparents who didn’t win the lottery are eligible for a “super visa” that allows them to visit family in Canada for up to two years at a time, but the visa doesn’t let them move here, work, study, access medical care or take English classes.

Families that did win the lottery have until the end of July to complete the application, but an IRCC official told lawyers attending The Canadian Bar Association Immigration Law Conference in Toronto last month that only 700 of the 10,000 invited families had applied so far – and that 15 per cent of their applications could not be processed because they were incomplete.

Spokespeople for IRCC would not confirm those figures with National Observer, stating that all statistics were still preliminary and inconclusive. Halifax immigration lawyer Lara Green, however, was in the room for the government presentation and later confirmed the information.

Both Green and Wozniak said they believe the initial online form led many families to believe they could sponsor relatives, since they didn't contain any prompting or direction on eligibility requirements. Addressing this concern, Nancy Caron, a spokeswoman for IRCC, said in an email to National Observer, "the onus continues to be on the applicant to ensure they meet the eligibility requirements of the program."

Canadian citizens and permanent residents are eligible to sponsor parents and grandparents, but they must meet strict income requirements for the previous three years, and that income must be verified by Canadian tax returns. For example, an adult daughter who is married and has two children must have a minimum income of $75,174 to sponsor both her parents to become permanent residents of Canada.

There are also strict eligibility rules for parents or grandparents, including a requirement that they be healthy. According to the federal Immigration and Refugee Protection Act, foreign nationals may be deemed inadmissible to Canada if they are likely to create "excessive demand" on the health or social care system, or if their condition could pose a danger to public health or safety.

Old system was 'awkward,' but it worked

Extended family reunification has been a constant pressure point in the Canadian immigration system. Ottawa halted all parent and grandparent sponsorships in 2011 when the backlog topped 150,000 and the average wait for processing reached eight years.

“Parents were dying before they got permanent residence,” Wozniak said of the system before 2011. “Literally dying.”

Wozniak said the system was awkward, but it worked. Couriers lined up outside the Mississauga processing centre to ensure her clients were at the front of the queue and once the applications were received, IRCC processed them quickly.

She said clients who applied in January were sometimes able to move to Canada by the summer.

“At this time last year, we had people who were approved and ready to arrive,” she said.

But only those who understood the quirks of the first-come-first-served system were able to make it work, and for most that meant hiring a lawyer. Some saw that as unfair.

In a December 2016 media press statement that announced the new lottery system, officials said they were changing it to “improve access to the application process” and “to give the same chance to all Canadians who are interested in applying to sponsor their parents or grandparents.”

But that’s not how it feels to Samara.

“My mother is healthy,” said Samara. “But she’s 73. Will she still be healthy when I’m allowed to sponsor?”

Caron of IRCC confirmed they are are considering a second lottery to meet the 2017 quota.

“Once we determine how many incomplete applications were received, the department will then notify the required number of additional sponsors using the original list and same randomized process that was taken to identify the first 10,000 persons invited to submit an application,” she wrote in an email. “We expect this process to occur before the end of 2017.”

She defended the new process but also said it may need to be improved.

"We are continuing to monitor results and will make any necessary adjustments for next year," she said. "The previous system...resulted in a backlog of applications which progressively got bigger year after year given the popularity of the program. We felt that it was unacceptable for people to wait many years to be reunited with their parents or grandparents. The fact is that caps are needed to prevent unmanageable backlogs and long processing times.

If he doesn’t win the second lottery, Samara said he will wait until 2018 and reapply for his mother.

— Kelly Toughill is editor and publisher of a subscription-based news and information portal about immigration and international students. She is accredited by the Immigration Consultants of Canada Regulatory Council and does limited volunteer work, but does not engage in individual immigration consulting.

Editor's Note: This story was updated on Wed. July 5 at 9:10 a.m. E.T. to include additional comments from IRCC, and corrected at 2:12 p.m. The previous version indicated that the federal government is planning a second lottery. This is not a concrete plan, and the new story indicates that the government is considering a second lottery. National Observer regrets the error.