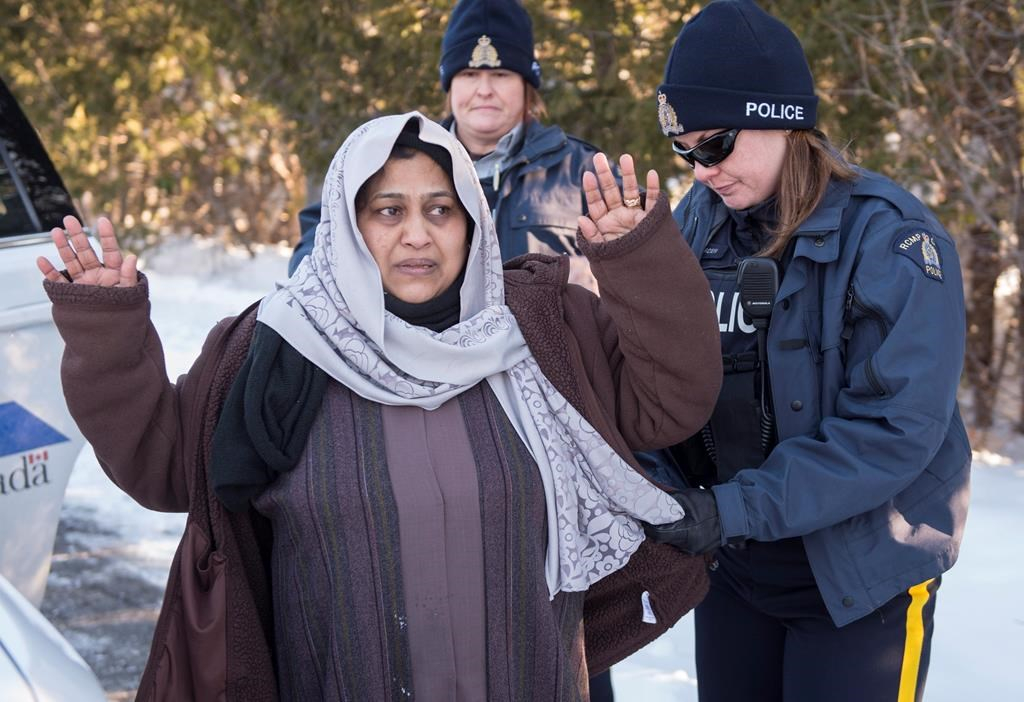 An RCMP officer frisks an asylum-seeker crossing into Canada from the U.S. on March 17, 2017. File photo by The Canadian Press
Previous story
Next story

A legal challenge is being launched against the Canada−U.S. agreement that governs where people can make asylum claims on either side of the border.

Three advocacy groups are throwing their support behind a woman being named only as "E" in asking the Federal Court to strike down the so−called Safe Third Country Agreement.

Under the deal, most people who make an asylum claim at the land border are denied entry; as a result, there’s been an influx of people crossing illegally into Canada in recent months to file asylum claims.

The Canadian Council for Refugees, Amnesty International and the Canadian Council of Churches are among the many groups urging Canada to suspend the arrangement following major changes to U.S. immigration and refugee policy since the election of President Donald Trump.

But now they’re asking the Federal Court to step in, arguing that sending claimants back to the U.S. is morally and legally wrong because it risks violating their basic rights.

The federal Liberals have said they believe the deal does not need to be suspended or altered, as the asylum system in the United States is still functioning.

The litigant in the case is described as a Salvadoran woman who fled after being targeted by a gang and who believes she won’t be protected in the U.S.

It’s not the first time the deal has been tested in court.

A legal challenge was mounted after it came into force in 2004, and while the Federal Court at the time agreed the U.S. may not be safe for all refugees, the decision was overturned on appeal.

"Our organizations have pressed repeatedly, expecting that Canada would move to suspend the Safe Third Country Agreement as regard for the rights of refugees has rapidly plummeted under the Trump Administration," said Alex Neve, secretary general of Amnesty International Canada in a statement.

"To our astonishment and disappointment, however, the Canadian government continues to maintain that the US asylum system qualifies as safe. We are left with no choice but to turn to the courts to protect refugee rights."

Despite the deal, there are people showing up at the land border and getting through based on the exemptions that exist, including having family already in Canada.

Data obtained under the Access to Information Act showed that over a six−day period in March, 123 people showed up at legal entry points along the border and requested asylum; 66 were judged eligible and 57 turned away.

But Canada needs to go further, Rev. Karen Hamilton, general secretary of The Canadian Council of Churches, said in a statement.

"The government of Canada has a responsibility to ensure that the human dignity of all persons is respected. So it is imperative that all who seek refuge in Canada are afforded the protections guaranteed to them under the Canadian Charter of Rights and Freedoms and international human rights treaties."

A spokesperson for Immigration Minister Ahmed Hussen said the government’s position on the agreement has not changed, and the deal remains in force.