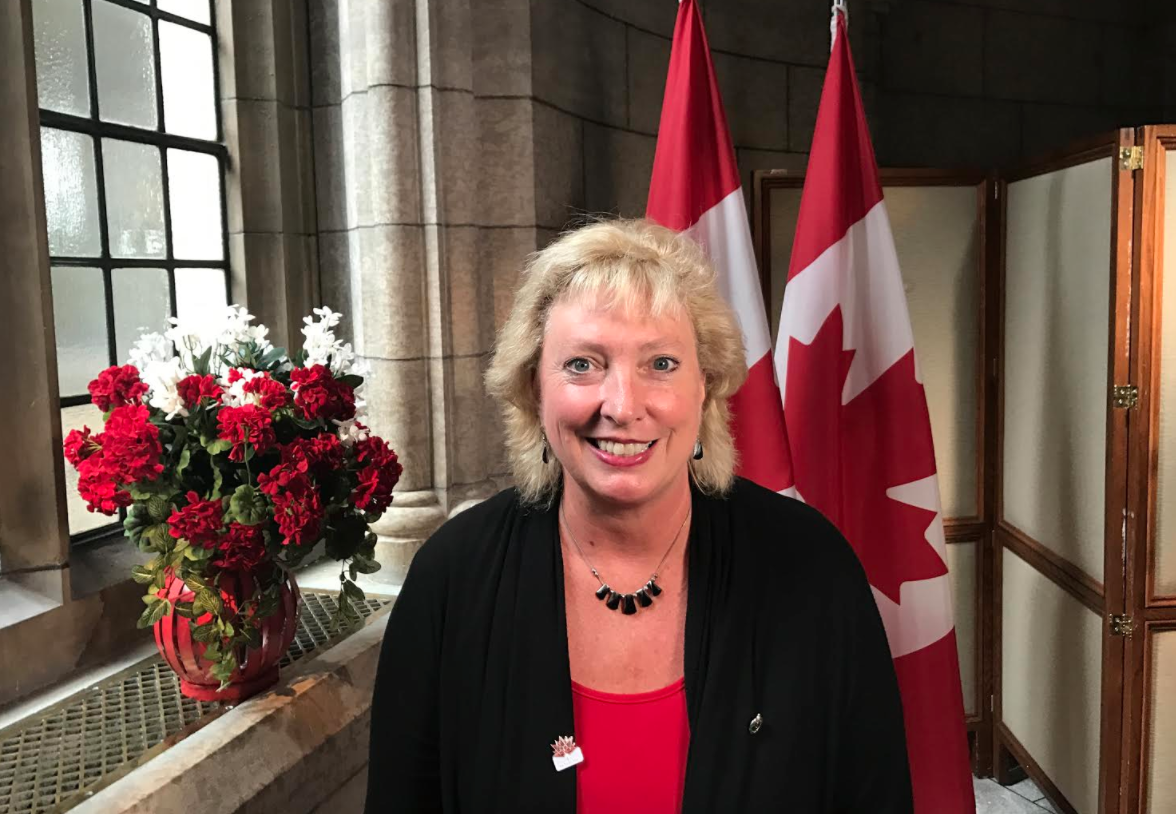 Sarnia-Lambton Conservative MP Marilyn Gladu has been a member of Parliament for less than two years, but has already gained a reputation for working across party lines. Photo courtesy of Marilyn Gladu's Ottawa team
Previous story
Next story

Somewhere between dressing up as the Grim Reaper at a party convention and suggesting that the Trudeau government's policies would drive children to smoke pot out of toaster ovens, Conservative MP Marilyn Gladu decided she wasn’t afraid to stand out.

Less than two years into her four-year term, the rookie politician has gained a reputation for working across party lines and has been named ‘the most collegial MP of 2016’ by Maclean’s magazine.

She has scolded senior members of her caucus for holding what she characterizes as “loud private conversations” in the House of Commons while others are speaking. She also helped start an all-party women’s caucus to discuss issues in Parliament.

As the Official Opposition’s science critic, she has even declined to criticize anything about Liberal Science Minister Kirsty Duncan's Canada-wide science strategy, since as a pair, they collectively agreed on the approach in advance.

Gladu dressed up as the Grim Reaper at the Conservative Party Convention in Vancouver last year in a creative attempt to encourage her party members to shake off the "doom and gloom" of losing the federal election.

Without the costume, Gladu has a lot of ideas about how Conservatives can refresh their policies and values in Canada. And as MPs left Ottawa for the start of their summer break last month, the Ontario MP for Sarnia-Lambton shared some of those ideas in a wide-ranging interview with National Observer on the status of women, science, journalism and party politics in Canada.

But so far, she says the “jury is still out” on whether being a politician is her true calling after a career of more than 30 years as a professional engineer for oil, gas and chemical companies.

'Politicking and weaselling' in Parliament

Gladu admits to being shocked by two things when she started her career as a politician: the “just plain rude” heckling between seasoned politicians in the House of Commons and the extent she feels the Trudeau government spins public messaging in its favour.

She cites the federal deficit as a primary example of spin. In the early years of their mandate, the Liberals promised annual shortfalls would not exceed $10 billion — a deficit that is now projected to reach $28.5 billion between 2017 and 2018. Cutting taxes for the middle class is another one, she says, as economists and Tories alike question how much the average Canadian’s bottom line will really benefit from the government’s changes.

She says she always knew there would be “politicking and weaselling” in Parliament, but never thought it could go so far.

“It just seems to me that in business, if you’re in a position of leadership, there is a certain standard of integrity and ethics and accountability that goes with that rule,” says Gladu. “So to me, if you’re the prime minister, shouldn’t you tell the truth and obey the rules? People who are working hard have no time to sort out what’s true and what’s not true, so when the leader of your country misrepresents the facts, it’s very troubling.”

Gladu, 54, is the first female engineer to sit in Parliament, and has travelled the world over three decades as an engineer for Dow Chemical, Suncor and other petrochemical companies. She moonlights as a youth leader, camp director and Sunday school teacher and has a black belt in Tae Kwon Do.

While she’s frustrated with Trudeau government rhetoric, she says her desire to change the modus operandi in Parliament extends to her own party as well. She has asked her caucus to cut back on the heckling while MPs are speaking in the House of Commons (with small exceptions for the “dramatics” of Question Period, she adds) and is working towards stronger collaboration with other parties to get things done.

It helps to be part of an all-party women’s caucus and chairwoman of the Standing Committee on Status of Women, she acknowledges, where she is exposed to perspectives from across the political spectrum.

“I think with the newer parliamentarians, I would say they all want to do the right thing for Canada and that we’re all seeing that within our party, we don’t get the full story,” she says. “I get the Conservative slant, the Liberals get the Liberal slant, and so when we get together and start exchanging information, we see the full picture.

"A lot of times, that can change our view on the different legislation that’s coming forward or what our approach should be.”

In fact, Gladu doesn’t mind going against the Conservative grain, particularly on issues where the party has no formal policy. Flying in the face of Tory tradition, she supported restoration of the long-form census and has openly supported the undoing of the Harper-era practice of muzzling scientists.

“I have voted against the party before and certainly will again because I’m here to represent Sarnia-Lambton,” says Gladu. “I think under the Harper regime, it was toe the party line and there was punishment if people didn’t toe the party line.”

The Conservative Party has changed under the interim leadership of Rona Ambrose, she says, who did a “great job of resetting the tone” of the party after nearly a decade under former prime minister Stephen Harper. The rookie MP is confident that the culture shift — toward a more diverse, welcoming and gender-balanced party — will continue with the new party leader, Andrew Scheer, whom she describes as a “firm believer in diversity,” and a “very positive person” with a “great sense of humour.” (Gladu had also endorsed Scheer in the Conservative leadership race.)

But the task remains, she laughs, of getting some of the older party members to recognize when they’re still acting like “an old boys’ club.”

“For example, every year they want to plan activities. They’ll plan a hockey game and don’t realize that it’s not necessarily an inclusive activity,” she says.

Gladu is acutely aware that as a female MP — and her party’s science critic — women of all ages may be watching her as an example of what they can accomplish in politics. She’d like to see more female members of Parliament, but recognizes that first, women must be empowered to toss their hats into the ring.

One of the Ontario MP’s proudest accomplishments is Bill C-277 — her palliative care bill — which passed its third reading with unanimous support in the House. The bill, which would require the federal health minister to develop and implement a framework to provide all Canadians access to palliative care, is currently on its way to the Senate.

Gladu tries her best to be a good role model, she says, but that doesn’t mean she always succeeds or that she’s immune to criticism. The Georgia Straight has called her an indication of “how completely unaware Canadian politicians are about who cannabis users are” for her comments on drying marijuana leaves in a toaster oven, in an article whose headline begins with the words, “Roach of the Week.”

The article discussed Conservative fears that children could accidentally ingest or grow up to eventually traffic marijuana as a result of a Liberal proposal to allow Canadians to have up to four pot plants in a single household. Speaking about the dangers of easy of access to the drug, in the House of Commons, Gladu brought up a practice from her college days of drying out the plant leaves before smoking up.

Shortly before she was elected in October 2015, Gladu had come under fire for comments in 2013 and 2014 tying Christianity to “the foundation” of Canada’s anthem and constitution. Last year, she was also criticized over what she described as an erroneous news report that claimed she said Donald Trump, a presidential candidate at the time, was a “bright light” restoring “freedom of speech to America.”

The latter two reports either got the facts wrong or were misleading, Gladu told National Observer, and in most media coverage of her comments on pot, the pressing health and safety points she was trying to make were drowned out by the example she chose to illustrate them. Gladu says she believes in a healthy separation of church, and state and the Donald Trump comments were actually uttered by one of her constituents — not her — yet neither were clarified in coverage of the controversies.

“…Press Progress trolled through four years of my Facebook posts, even before I had intended to go into politics, and they took out the ones they wanted to skew a story on and basically smeared my reputation in the community,” she insists. “That was my first introduction to what happens to your life when you go into politics.”

She called the fake news phenomenon, or indeed, the skewed news phenomenon, “disturbing” and a “real disservice” to the Canadian public. She emphasized the importance of having a robust gallery of journalists who analyze all the information, report accurately and objectively.

“I don’t expect them to be kind to the Conservatives, to the Liberals, to the NDP or anyone,” Gladu clarifies. “I expect them to be hard-hitting and look at the information that’s out there, and let Canadians know what they need to know. That’s not the situation that we have…that’s what the Canadian people need.”

Admittedly, she says, it’s a tough job for the media, which she says is swamped by Liberal government “news releases that are spins on their policy.” It’s tough to be an Opposition member and critic, she adds, but as long as she’s in the House, she’ll do her best.

thanks for this - it has

thanks for this - it has helped restore some faith in my MP!