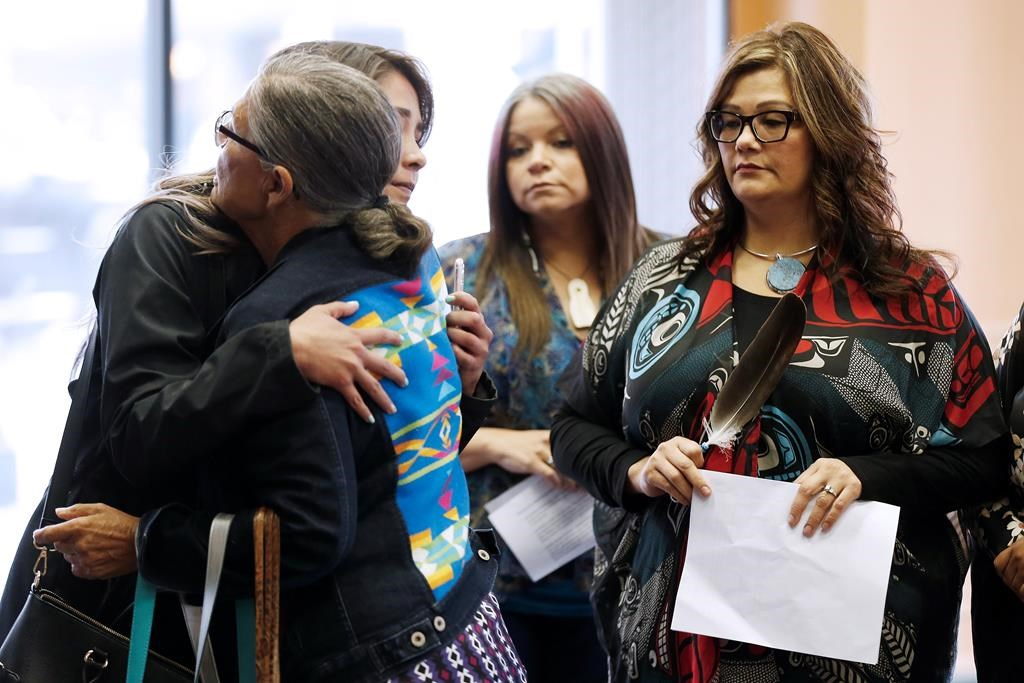 Family members of the MMIWG and Coalition Co-chairs greet each other prior to a press conference calling for a re-organization of the National Inquiry into MMIWG in Winnipeg, on Wed. July 12, 2017. Photo by The Canadian Press/John Woods
Previous story
Next story

Cries from frustrated families of missing and murdered Indigenous women and girls grew louder Wednesday as advocates in different parts of the country called for a reboot of the study following the resignation of a Metis commissioner.

Bridget Tolley, who has spent 16 years searching for answers in the death of her mother Gladys, said she was about to meet with members of the inquiry at a Toronto hotel when she learned Marilyn Poitras — one of five commissioners named last summer by the Liberal government — resigned from her position.

The focus of the meeting was an open letter released by a coalition of advocates in May who argued the commission needed to shift its approach and suggested it was in "serious trouble."

Yet, there was no mention of Poitras' departure, Tolley said in an interview Wednesday.

"We waited for them to bring it up but they didn't," she said. "We all knew about it too."

Tolley and a number of others want a major overhaul of the two-year $53.8 million study designed to examine the root causes of violence against Indigenous women and girls.

Beverley Jacobs, a former president of the Native Women's Association of Canada, said she was supportive of the inquiry in the beginning but doesn't have it in her to back something that may cause harm to families.

"Why can't the rest of the commissioners accept that this isn't working and that they really need to take a look at themselves and understand that there's no trust and if there is, there's very, very little from very few families?," she said.

In Winnipeg, advocates called for the remaining four commissioners to step down.

"We think that it would be in the best interests of the Indigenous women of Canada that the current commissioners be brave and ... step down," said Sandra Delaronde, co-chair of a coalition of Manitoba relatives of missing and murdered women.

"The national inquiry, in its current form, is not hearing the voices, is not inviting the consultation ... of the families and those that work on a daily basis with families."

Delaronde said families don't want the inquiry scrapped, but changes are required, including new commissioners who are related to victims or who have worked closely with victims' families.

Betty Rourke, whose sister and daughter were killed in separate incidents decades apart, said she watched footage of the inquiry's hearing in Whitehorse and was shocked.

"It's almost like you're on trial there," she said. "We don't want to have to be sworn-in, you know? Because we're going to tell the truth. What, don't you believe me? That hurts."

The coalition also said it wants a separate commissioner for Manitoba.

Lead commissioner Marion Buller said Tuesday it will be up to the federal government to decide if a replacement for Poitras will be named, adding the commission remains focused on its "tremendously important work."

Metis National Council President Clement Chartier, who said his mother was "viciously violated" and beaten to death in 1961, wants a quick decision on whether another commissioner is required.

The council would like to see a Metis person appointed, and consultations would be necessary, Chartier said.

He said he does not want to see resignations from the remaining commissioners.

"If they do resign, it is just going to put everything back," he said. "It is not a very good signal."

The commission says it is moving ahead with its work, including nine hearings this fall beginning in September in Thunder Bay, Ont.

Buller has already said more time and funding will be required but a formal application has yet to be filed to the federal government. The commission is required to produce an interim report in November.

"I told the minister I am tired," she said. "To be sitting next to her last night at the meeting and her knowing I have been doing this for over a decade ... Why am I sitting next to Carolyn a decade later asking for the same things?"