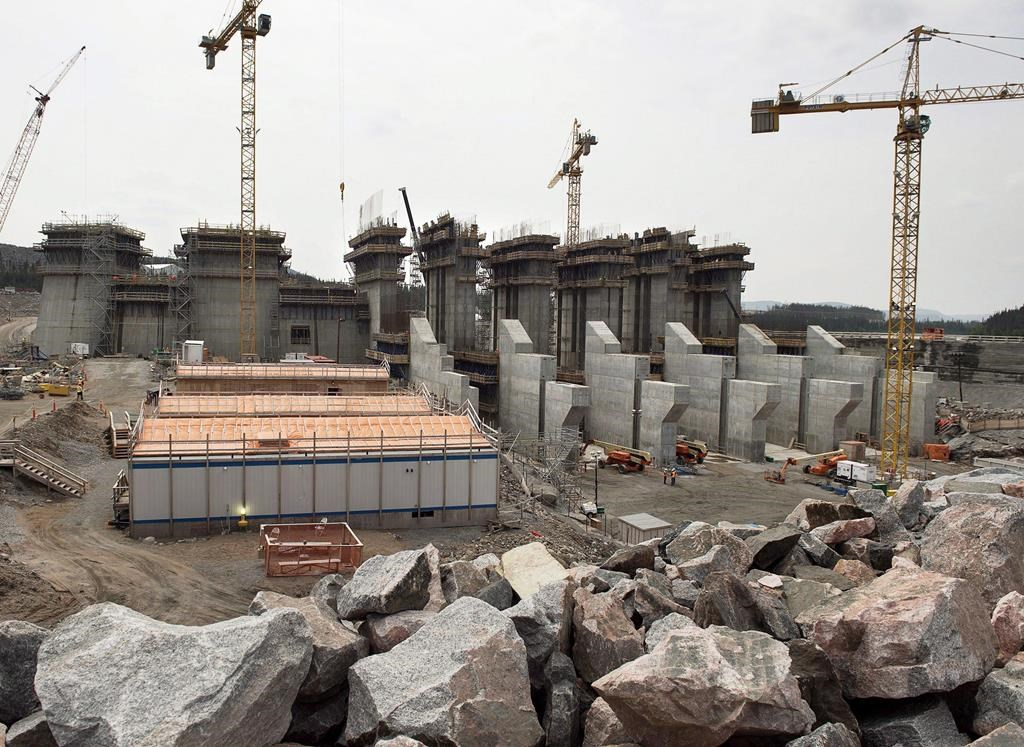 The construction site of the hydroelectric facility at Muskrat Falls, Newfoundland and Labrador is seen on Tuesday, July 14, 2015. File photo by The Canadian Press/Andrew Vaughan
Previous story
Next story

A nagging dread is keeping Craig Chaulk up at night.

He lives downstream from the $12.7-billion Muskrat Falls hydroelectric development in Labrador. He's among many residents concerned that a crucial part of the dam, a jut of sand and clay called the North Spur, could give way.

"My biggest fear is that the project will go to completion, the reservoir will be filled to 39 metres as they're proposing, the North Spur will fail and this little community that I live in will be wiped right off the face of this Earth," Chaulk said from his home at Mud Lake.

The 200-year-old community of about 70 people has already faced the worst spring flooding anyone there can remember. Chaulk and dozens of other residents were airlifted to safety May 17 as water levels swiftly rose after ice jammed where the lower Churchill River meets Lake Melville.

Crown corporation Nalcor Energy, which is responsible for Muskrat Falls, has denied it did anything to swamp almost 50 homes and structures. It blamed the incident on spring run-off. The flood is now under independent review.

Chaulk said that experience has shaken his confidence in the development — especially as questions persist about the North Spur.

It's a natural dam of clay and sand that will form a critical part of the Muskrat Falls project to harness hydro power near Happy Valley-Goose Bay. Landslides have happened in that area before.

Chaulk takes no comfort from Nalcor's public assurances that the North Spur has been stabilized, protected and reinforced using proven engineering methods endorsed by third parties.

He's among increasingly vocal skeptics who say it's a weak link in the megaproject's design that, like the Mud Lake flood, should be independently reviewed.

They include David Vardy, a former chairman of the provincial Public Utilities Board, who served as a senior public servant for almost 30 years. He believes there's a lack of geotechnical evidence that potentially sensitive clays underlying the North Spur can withstand the pressure of higher reservoir levels.

Vardy noted the issue was red-flagged in an internal 2013 risk assessment report by engineering and construction firm SNC-Lavalin, which designed Muskrat Falls and the North Spur dam.

Natural Resources Minister Siobhan Coady said Friday in a statement that North Spur groundwater and soil properties "have been studied by multiple geoscience engineers since 1965."

Vardy is not convinced. The North Spur is not like fully engineered dams, he stressed.

"We need the government to appoint an expert panel," he said in an interview. "The problem here is, for whatever reason, Nalcor has decided that this is all perfectly safe."

A group of concerned citizens is also calling on Premier Dwight Ball to act. In an open letter Wednesday, the Labrador Land Protectors and Grand Riverkeeper Labrador said they've received no response to a letter May 9 urging an independent expert review.

The project is already well behind schedule. Costs have soared from $7.7 billion when the former Progressive Conservative government approved it in 2012, to $12.7 billion. First power is not expected until 2019.

It said cement cut-off walls down to the lower clay layer will protect the spur, along with rock walls, drainage and relief wells.

Not all researchers agree with Nalcor's approach.

Robin Dury has just finished a Master's thesis in civil engineering at Lulea University of Technology in Sweden, focusing on the North Spur. He questions Nalcor's risk assessments.

Landslide analysis at the site has been based on modelling which may not best reflect conditions at the North Spur, he found.

At issue is whether the porous nature of those soils is being correctly analysed along with the risk they could liquefy and give way, Dury explained in an email. He uses a "progressive failure method" to calculate that "there exists a certain risk of landslides triggering in both the upper and lower clay layers."

More testing should be done "immediately," he concludes. Dury's findings raise more doubts for Chaulk, who doesn't want to leave his home at Mud Lake.

"I've laid awake in my bed for so many nights trying to think of a way to make people understand the threat we're facing, and try to convey to people that it just can't go on the way it is because the risks are simply much too high."