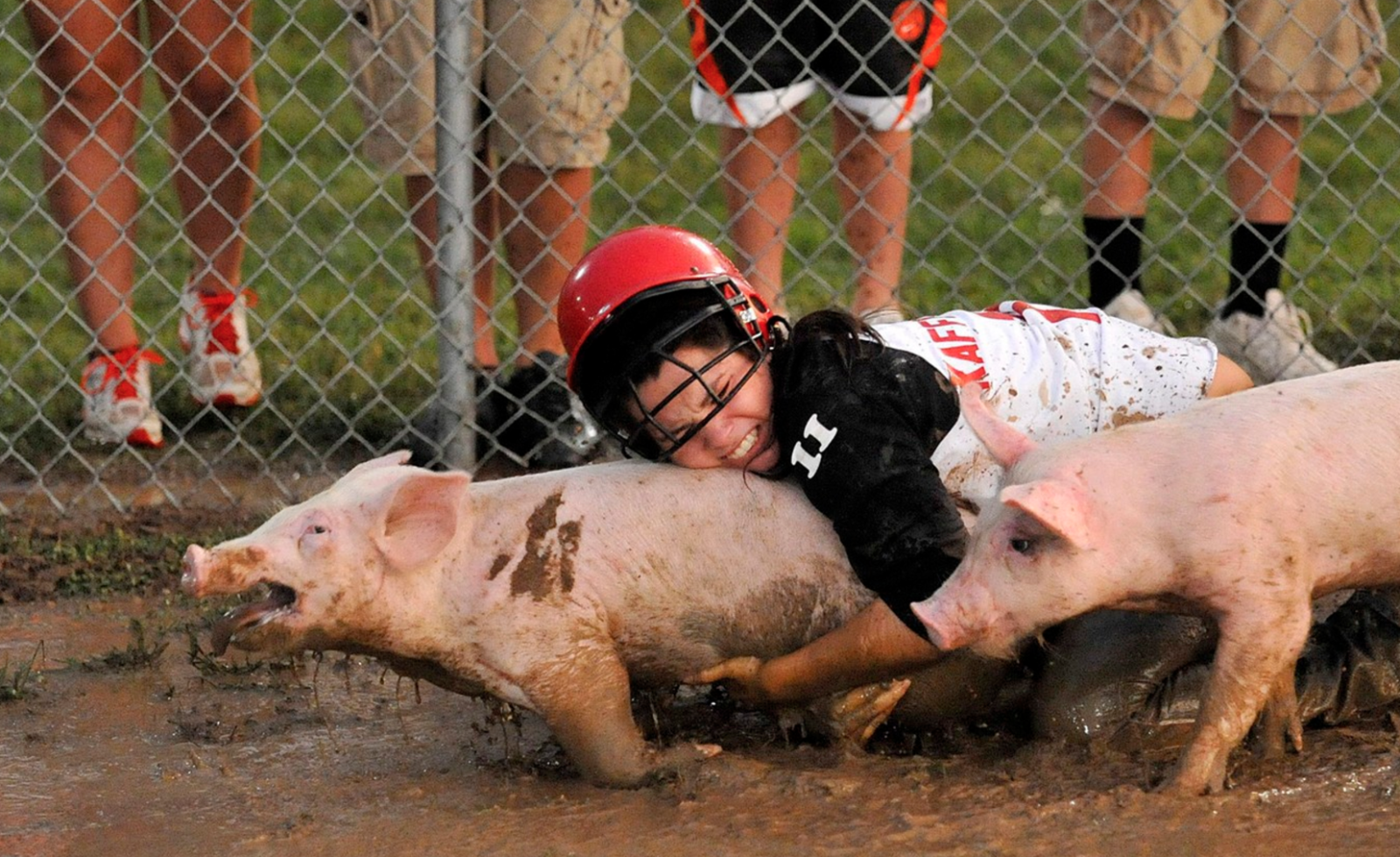 A competitor dives on the back of a pig to try to catch it, Friday, July 29, 2011 during the Clark County Fair's Pig Scramble event in Springfield, Ohio. File photo by The Canadian Press/The Associated Press/Springfield News-Sun, Bill Lackey
Previous story
Next story

At least four pig scrambles have been scrapped from Canadian fairs and exhibitions this year — a string of victories worth squealing about, say animal welfare advocates.

A pig scramble allows small children to chase, tackle and capture piglets in an enclosed pen — a practice animal activists decry as cruel and unethical.

"It’s the right thing to do because the critical issue is, what do we want to teach our children?" Anita Krajnc, co-founder of Toronto Pig Save, told National Observer. "The last thing I think we need to teach them is to frighten, terrify and distress pigs. These are one of the most intelligent animals on the planet."

The activist group started an online petition pressuring the Lombardy Fair to cancel the pig scramble and gained more than 5,400 online signatures. In a public statement announcing its decision however, the Lombardy Agricultural Society said it stopped the event not as a result of activist pressure, but to protect its fair-goers from "the stress of meeting demonstrators at our fair entrance."

"The people who are objecting to our pig scramble know nothing about livestock and are just caught up in another reason to demonstrate," reads a notice from John W. Joynt, director of the Lombardy Agricultural Society. "We invite these protesters to come to our fair and learn more about livestock and farm life before they expose themselves further as ignorant, uniformed, supposedly concerned citizens."

Joynt said in his statement that the piglets used in the scramble are "squealing... not from distress, but rather from delight at the fun they're having too." He said this was their only opportunity to run around freely before they turn five months old and are sent to be slaughtered. The area's livestock breeders and farmers are "very concerned" with the welfare of their animals, said Joynt, since their livelihood depends on them.

He recognized that animal abuse occurs on farms, but encouraged the public not to "blame everyone for the mistakes of a very few."

Asked what she thought of being called 'ignorant,' and of the suggestion that pigs enjoy the scramble event, Kranjc said she wouldn't return Joyn's name-calling. She suggested that if farmers want their pigs to see sunlight, they should send the animals to a sanctuary instead.

"I’m not going to call anyone names; what I’m interested in is ethics," she explained. "It's just utterly heartbreaking. Our position is that children should visit farm sanctuaries where pigs, cows and other farm animals are rescued and they live their lives in a loving, forever home."

The Lombardy Agricultural Society declined an interview request on the pig scramble decision. In an email to National Observer, Lombardy Fair president Melanie Chisholm said the team had "decided to move on from this issue," and is "focusing on planning our upcoming fair."

Joynt told CTV in an interview that his comments in the public statement were probably "were not wisely chosen for the situation."

An example of "tone-deaf" farming industry

Camille Labchuk, executive director Animal Justice, welcomed what appears to be a trend in bucking pig scramble events. The pig scramble portion of the PEI Plowing Match and Agricultural Fair in Dundas was cancelled this year after the national animal law organization sent a letter informing local police that the event may violate provincial animal cruelty laws, along with the federal criminal code.

"Pig scrambles and other rodeo-type events where animals are used for entertainment inflict distress, suffering, psychological harm and fear onto those animals for no necessary or valid purpose other than simply, entertainment," Labchuk, a lawyer, told National Observer.

"I think what we’re seeing here is that whether these events are legal or illegal, people don’t accept them anymore. People are saying, ‘It’s not okay to terrify frightened baby animals just so you can have a few fleeting moments of laughter.’”

Of Joynt's letter suggesting piglets enjoy the annual scramble, Labchuk said the agricultural industry is clearly "tone-deaf" to the concerns of average Canadians.

"I think that the letter this individual sent really is a strong example of how tone-deaf the industry is to what real people perceive of their practices," she explained. "They actually highlight in this letter that these are pigs who are kept confined in a dark barn until they’re sent to slaughter at just a few months old.

"So for that to have been included in the letter — it’s something they obviously don’t think the public has an issue with, but the reality couldn’t be farther from that."

Very heartened by the

Very heartened by the cancellations and applaud the efforts of the protesters. Let's all help make this world a better place and stop teaching our children at an early age that fellow animals' pain and suffering don't matter as long as the kid finds it "fun" to catch terrorized piglets. What is with the parents?

These "events", thinly disguised as "entertainment", are nothing more than abusive human activities at the expense of the pigs' welfare.

Those who derive any semblance of pleasure by watching similar spectacles, need to see "the light of day". Although "domesticated", these and all other animals, are sentient beings, and have the right to be afforded seeing the light of day, running in pastures and mud, and acting instinctively in their natural environments.

Yes, agreeably, they are raised for food, but it must not be at the cost of their comfort and welfare.

"I assure you I do not do the thing you suggest. That would be barbarous. I treat these visitors with every consideration. They get plenty of good food and exercise. "
"The Most Dangerous Game", by Richard Connell (1893-1949).

My post was before the Animal Justice comments were included in the article.
"Labchuk said the agricultural industry is clearly "tone-deaf" to the concerns of average Canadians."

Members of the agricultural industry, for the most part, aren't "tone deaf" to animal welfare concerns and aren't the morally bankrupt participants and voyeurs of these abysmal "entertaining" activities. Rather, animals represent an integral aspect of their businesses, with the majority striving to raise their animals in the healthiest way, in the best environment possible. Likewise, the land is also a valuable resource. Farmers/agriculturalists, are the best stewards of the lands - they can't afford not to be.

There are bad apples in every bushel - don't paint them all with the same brush.

I strongly advise John W. Joynt to inform himself about animal behavior and animal psychology before spouting ignorant statements.