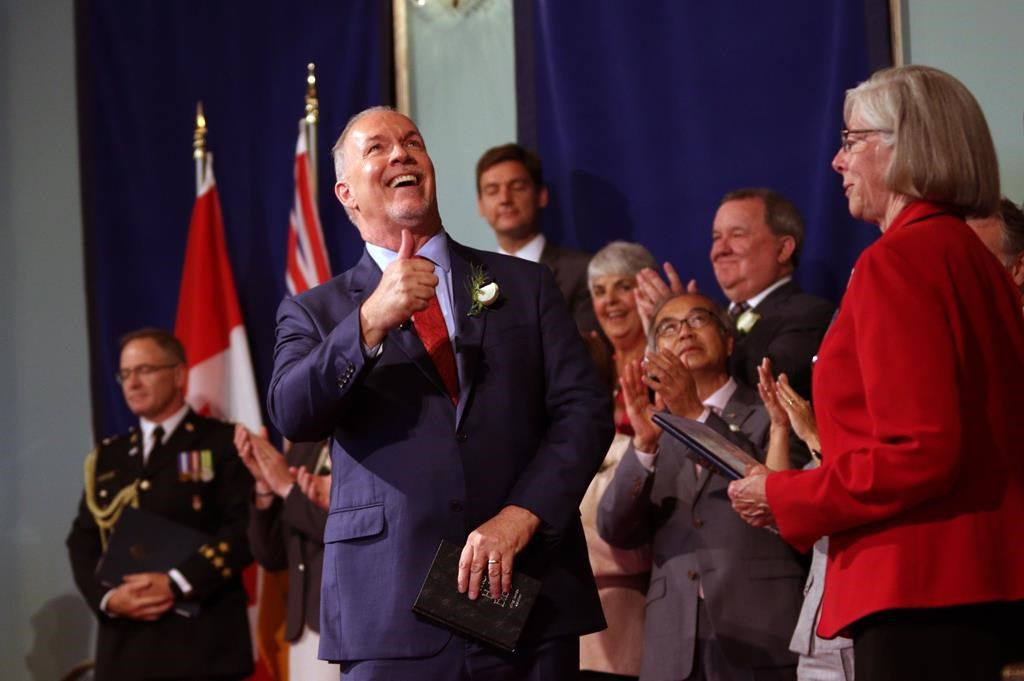 B.C. Premier John Horgan's cabinet was sworn in on July 18, 2017, in Victoria. Photo by The Canadian Press
Previous story

British Columbia’s New Democrat Premier John Horgan took the reins of government Tuesday by noting that nearly 40,000 residents have been forced out of their homes by wildfires raging through the province’s Interior.

"But Canadians come together in times like this and it’s heartening to see people across political stripes, people across the country, coming together to help fellow Canadians, British Columbians, get through a difficult time," he said after his cabinet was sworn in following 16 years in Opposition.

"I want to commit to those who are in distress today that these 11 men and 11 women will be working as hard as we can to ensure that we get through this crisis and you are back in your homes safe and building a future for your families in this great province," Horgan said in his first speech as premier.

He thanked his family, including two sons and his "beautiful, spectacular, stellar wife" Ellie for their support as he sought the province’s top political job.

Horgan also noted his basketball coach and others for contributing to the development of his character and instilling values that his mother started teaching him and his siblings following his father’s death.

The New Democrats took office with a one−seat edge over the Liberals after an agreement was reached with the three Green members of the legislature elected on May 9. The Liberals won 43 seats in the 87 seat legislature, but Christy Clark’s government was defeated in a confidence vote last month.

Horgan said his cabinet is the first in British Columbia to achieve gender parity, with 10 women in cabinet and one named as minister of state.

Melanie Mark, the first First Nations woman to be appointed to cabinet in British Columbia, wore a red button blanket and carried an eagle feather as she was sworn in as minister of advanced education, skills and training.

NDP stalwart Carole James received a standing ovation when she was sworn in as deputy premier and minister of finance while longtime New Democrat Mike Farnworth, who challenged Horgan for leadership of the party, took over as solicitor general and public safety minister.

Six members of the legislative assembly were named as parliamentary secretaries, ranging in areas such as poverty reduction and emergency preparedness.

The NDP has also created a new Ministry of Mental Health and Addictions, with former health critic Judy Darcy at the helm, as the death toll from opioid overdoses continues to climb in B.C.

"We have to redouble our efforts to make sure that the tragedy of overdose deaths does not continue in this great province," Horgan said.

He also called for a softwood lumber agreement to be reached "so that families in the Interior do not have to go home to a burned−out community that doesn’t have any jobs."

Green party Leader Andrew Weaver congratulated Horgan and his cabinet as he attended the swearing-in ceremony.

"This minority government is a once-in-a-lifetime chance to do politics differently in British Columbia," Weaver said in a statement. "We have a historic opportunity to put partisan politics aside and work together across party lines to advance good public policy that is in the best interest of British Columbians."

Premiers forge ahead with Indigenous meeting despite boycott by three groups