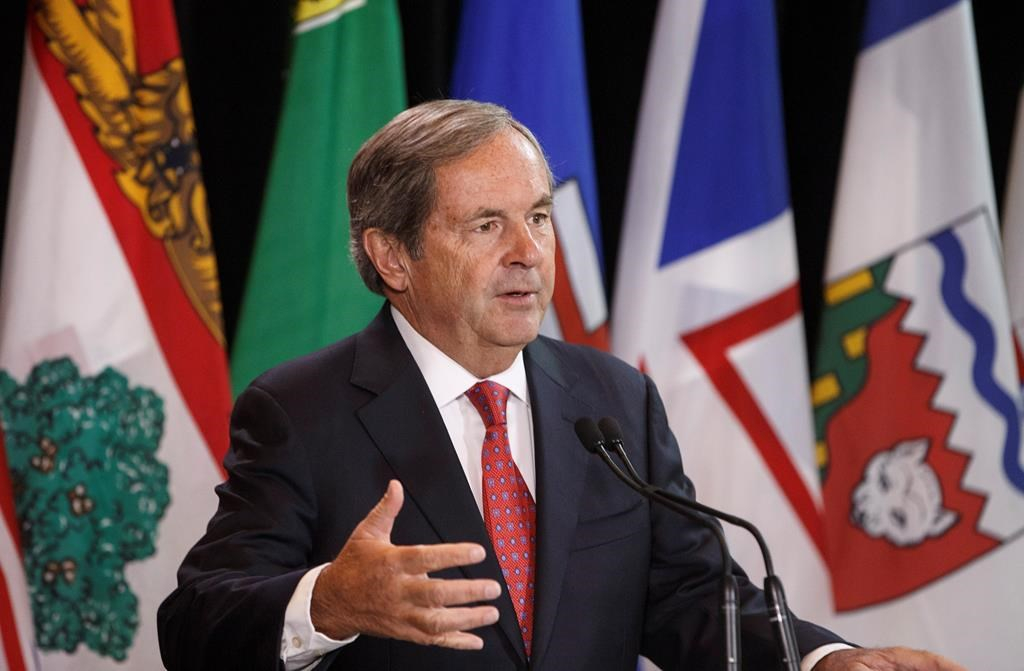 Canada's ambassador to the U.S. David MacNaughton speaks during a press conference at the Council of Federation meetings in Edmonton Alta, on Tuesday, July 18, 2017. Photo by The Canadian Press/Jason Franson
Previous story
Next story

Canada's ambassador to the United States says he is pushing hard for a timely resolution on the NAFTA renegotiation, but he won't accept a bad deal to get it.

"We've heard from Canadian business (and) from the provinces that there's a certain amount of uncertainty that is causing people to perhaps delay investments," David MacNaughton said Tuesday on the opening day of the premiers' annual summer meeting.

"Obviously if we could get a clarification of the trading relationship sooner rather than later it would be better, but having said that we're not going to rush into a bad deal.

"We're ready to sit down and work on this negotiation for as long as it takes to get something that is going to be good for Canadians."

MacNaughton made the comments prior to briefing the leaders of Canada's provinces and territories on trade and the upcoming NAFTA talks.

In May, U.S. President Donald Trump's administration gave notice it wants to renegotiate the 23-year-old tripartite North American Free Trade Agreement. The president says it is obsolete and unfair to American workers.

On Monday, the U.S. released a list of what it wishes to see changed when talks begin next month.

The U.S. wants more exports of its dairy and other agricultural products, free trade in telecommunication and online purchases, and the elimination of independent dispute resolution panels, which have ruled in Canada's favour on contentious issues such as softwood lumber.

MacNaughton said some form of external dispute resolution is critical.

MacNaughton said recent discussions with U.S. business leaders, state governors and the Trump administration suggest everyone is seeking a fair and balanced deal. But if the U.S. wants Canada to loosen up on subsidies and protectionist rules, the ambassador says bring it on.

"The U.S. dairy industry is heavily subsidized and heavily protected, as is their sugar industry and a number of other areas, so if they want to start talking about opening up agricultural markets we're happy to talk about them opening up theirs."

Quebec Premier Philippe Couillard said given that the U.S. list of NAFTA concerns is 16 pages long, Canadians should not expect a resolution anytime soon.

"It would be extremely unlikely that such a wide, broad list of subjects could be settled in a matter of months," Couillard said

"It will take years. It's a long, long negotiation."

Ontario Premier Kathleen Wynne said she has spoken to 22 state governors as well as with federal lawmakers. The prevailing feeling on both sides of the border, she said, is that no harm be done to the trade agreement.

"What I have found in the United States is that there's a very deep understanding among leaders there that the connectivity between our economies is important for both of us," said Wynne.

Manitoba Premier Brian Pallister said premiers need to continue to reach out to U.S. governors and lawmakers to make the case for cross-border trade.

"There's tremendous strength in working together and building things together," said Pallister.

Nova Scotia Premier Stephen McNeil said while the federal government will carry the ball on talks, he wants to make sure there's a way for provincial concerns and suggestions to be heard.

"There's no indication on my end that (the pathway) won't be there," said McNeil. "We just need to continue to make sure and be clear about that."

"What I want to make sure ... is that these negotiations don't linger on," said McNeil, whose province is a heavy exporter of seafood and rubber to the U.S.

"The investment world needs certainty. Both of our countries need this."

On Monday, Saskatchewan Premier Brad Wall suggested Canada should compile a discreet list of retaliatory measures should the NAFTA talks "get off the rail."

'This will not be a short negotiation': U.S. releases list of demands for NAFTA

It's show time: Trump to reveal his hopes for NAFTA

Why does he even want a quick

Why does he even want a quick deal, or a deal at all? NAFTA's bad enough as it is, no need to rush into giving it any steroids. Incidentally, any of the signatories can give six months' notice and walk away from NAFTA.

Of course I suppose nowadays you have to be realistic--fundamentally, walking away from NAFTA would be good for the Canadian economy, especially if accompanied by the kind of Green industrial policy that we cannot legally pursue right now but would be able to in the absence of "free trade" deals. But in reality, doing so would lead to a lot of pressure placed on the Canadian economy by various financial institutions public and private, seeking to make sure that nobody gets away with backing out of free trade, and these sorts of pressures can, as they said about Chile in the run-up to Pinochet's takeover, make an economy scream. But nobody's going to trash our economy for just not going around making things worse, so if Trump gets distracted and never gets around to NAFTA, for goodness sake don't remind him.