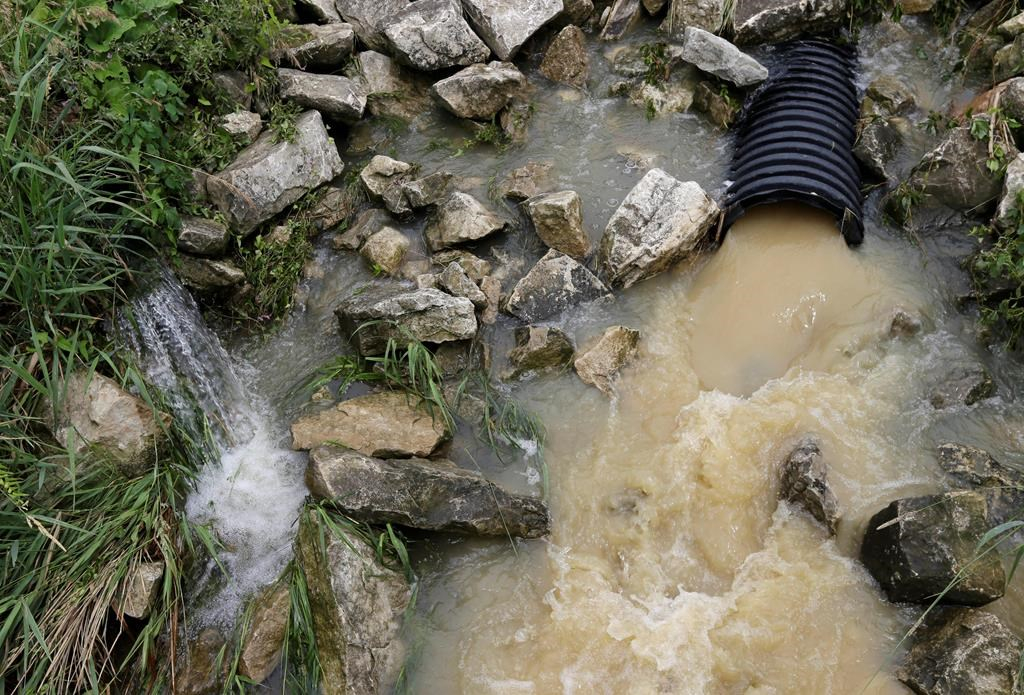 In this Wednesday, July 12, 2017 photo, clean water (left) and muddy water from the construction of a multi-state natural gas pipeline seep into a creek in New Washington, Ohio. File photo by The Associated Press/Tony Dejak
Previous story
Next story

The company that developed the Dakota Access oil pipeline is entangled in another fight, this time in Ohio where work on its multi-state natural gas pipeline has wrecked wetlands, flooded farm fields and flattened a 170-year-old farmhouse.

The federal commission that oversees gas pipelines told Dallas-based Energy Transfer Partners last week to clean up its mess before it will allow the Rover Pipeline to flow. New drilling on unfinished sections also remains halted after 2 million gallons (7.6 million litres) of drilling mud seeped into a wetland in the spring.

The $4.2 billion pipeline that will carry gas from Appalachian shale fields to Canada and states in the Midwest and Gulf Coast hasn't been besieged by the kinds of protests that erupted in North Dakota. However, opponents say the spills and snags highlight the risks that come with building huge pipelines needed for growing the natural gas and oil industries.

Much of the 700-mile (1,126-kilometre) Rover Pipeline is being built across Ohio and will extend into Michigan, Pennsylvania and West Virginia.

Ohio's environmental regulators and landowners say construction crews have been laying pipe at warp speed since March to meet the company's ambitious plan of finishing the first phase this month and the entire project by November.

"As soon as they started, they began having problems," said Craig Butler, director of Ohio's Environmental Protection Agency. "It's just a function of them moving too quickly, trying to meet a deadline and cutting corners."

The state EPA has proposed nearly $1 million in fines over violations that include allowing drilling mud to spill into wetlands, ponds and streams along with pumping storm water into streams and fields. Most of the violations were in March and April but some problems continue.

The federal agency is continuing to investigate and could issue more orders. It also accused the company of not being truthful about its intention to demolish a 170-year-old farmhouse that stood in the pipeline's path.

The company now is working to comply with regulators on the cleanup orders, said spokeswoman Alexis Daniel. But doing that will delay completing the pipeline's first phase until later this summer, she said Wednesday.

"Our pipelines are always constructed to the highest standards, so I would unequivocally deny any assertion to the contrary," Daniels said.

In Michigan, the state's two U.S. senators want federal regulators to pause construction and consider moving the path of the pipeline away from a popular lake and summer camp for children.

Dozens of Ohio farmers have complained that their fields have been flooded after heavy rains by crews pumping storm water out of open trenches. Some have asked a federal judge to tell the company to stop doing it, arguing it violates their land agreements.

Those agreements compensate the owners for putting the pipeline on their land, but farmers say it doesn't give the company the right to flood their adjacent land. Energy Transfer Partners said it has been dealing with unprecedented rainfall and is trying to avoid and minimize impact on crops.

Doug Phenicie, whose family farms about 1,800 acres (728 hectares) near New Washington in northern Ohio, said he watched this spring as a bulldozer pushed standing water onto a neighbour's field. "It looked like waves at the ocean," he said.

A muddy, brown stream rippled across his soybean field last week following another big storm as crews pumped out more water. It's become a common sight, he said.

The concern for farmers is that not only will some of this year's crop be ruined, but that it will be hurt for years to come in areas where the floodwaters have coated the ground with heavy clay and the heavy equipment has packed down the soil.

They've been told that the pipeline company will fix the fields and broken drainage tiles and reimburse farmers for future losses, Phenicie said, but he's not convinced.

"Who's going to answer the phone when they're gone?" he said.