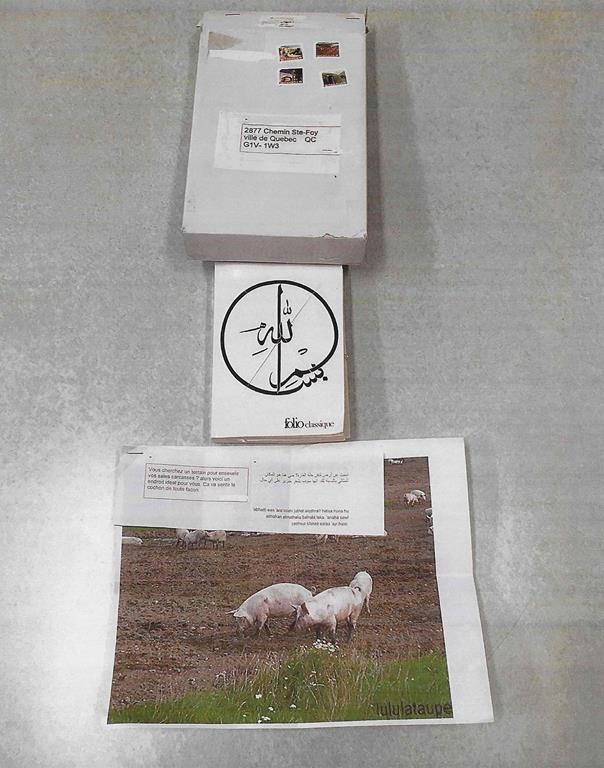 A package containing a defaced Qur'an and a note expressing hate toward a Muslim cemetery project has stoked renewed fears at a Quebec mosque where six men were killed in January, the mosque's secretary general said Wednesday.

Mahedine Djamai said when the parcel arrived Friday he expected it to contain more of the sympathy cards that have poured in from across Canada since the shooting.

Instead, he said, it contained a Qur'an that had been slashed and a note suggesting the Quebec City mosque should use a pig farm as a cemetery.

"I was shocked," Djamai said in a phone interview.

"I thought, once again we're getting this kind of message we didn't expect at all. It reminds us that there's always a fear that a terrible event like what happened on Jan. 29 could happen again."

Quebec Premier Philippe Couillard condemned the incident, describing it as "unacceptable and repulsive."

"It's hard to prevent the darker sides of human nature," Couillard said in Edmonton as he attended a meeting of the country's premiers.

"It's a repulsive act done by a coward, essentially, and it should be condemned and rejected. And it is rejected by the majority of Quebecers."

Prime Minister Justin Trudeau said the incident has nothing to do with Quebec or Canadian values.

"In any society, there will be people who are intolerant or racist and I think the challenge of a strong society is to spend our time focusing on where we are similar and not where we are different," Trudeau said in Quebec City.

"We consider it to be an attack that is outside of our values and our way of living."

The package arrived two days before a referendum on a proposed Muslim cemetery was held Sunday in Saint-Apollinaire, about 35 kilometres from Quebec City.

Djamai said the mosque informed police about the package but decided not to go public until after the referendum to avoid influencing the vote.

A zoning change that would have allowed the burial ground project to move forward was rejected by 19 votes to 16.

"Certainly, I'm pleased to see that various authorities are looking to move forward and ensure discrimination doesn't happen, that people who are proud Quebecers, proud Canadians, who also happen to be Muslim, will have the capacity to bury their loved ones here in their country," he said.

"And that kids and grandkids who have lost their grandparents will be able to visit them regularly here at home."

Quebec City police spokesman David Poitras said security has been increased around the Centre culturel islamique de Quebec mosque and that authorities were taking the matter of the package seriously.

He added it was too soon to know whether charges will be laid.

This is not the first time a hateful gesture has been directed toward the mosque.

In June 2016, a pig's head was left at its entrance during Ramadan. The pig's head was wrapped in paper and was accompanied by a note that read "Bonne (sic) appetit."

The mosque has said it has also received hateful letters since the attack.