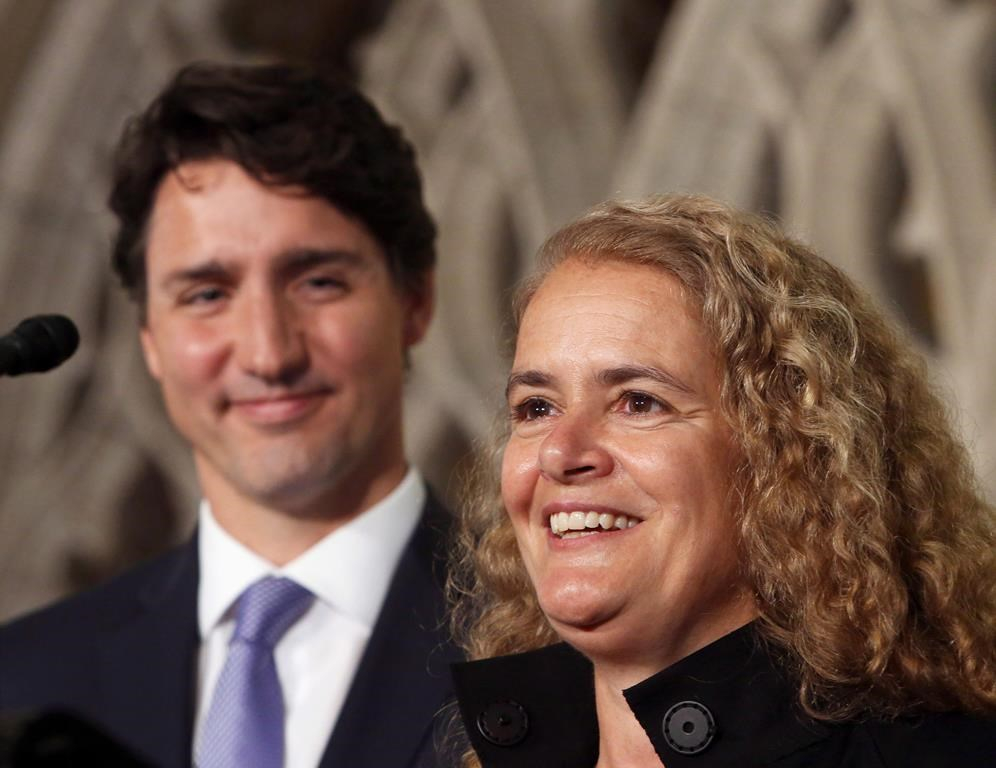 Prime Minister Justin Trudeau is refusing to say what he knew — and when he knew it — about a dismissed, non-felony charge against his choice for Governor General.

Julie Payette is calling the six-year-old incident a case of an "unfounded" allegation for which she was "immediately cleared" without any prosecution.

The second-degree assault charge doesn't appear in Maryland court records, but is accessible through American-based background check websites that provide the charge, dates, case number, location and reason for its dismissal. It provides no further details about the reasons for the charge.

The incident, first reported by the political news website iPolitics, has raised questions about whether Trudeau knew about the potentially embarrassing information during the selection process that took place behind closed doors in the Prime Minister's Office. And if he did know, why he didn't see it as an issue towards making Payette the next viceregal.

Trudeau twice said Wednesday he had no comment when asked about the deleted charge against Payette, echoing comments he made a day earlier.

He said that before any appointment to such a high-profile political post, the government conducts a thorough background search on the candidate's past. Trudeau wouldn't say if he had been made aware of the incident prior to her appointment.

"I know that Mme. Payette is going to make an extraordinary governor general. She represents the very best of Canadian values, openness to the world, curiosity, intellectual rigour and inspiration. She will continue to inspire generations of Canadians as she represents us at the very highest level," Trudeau said at an event in Quebec City.

Political appointees normally are run through a detailed vetting process that includes looking for details that could become damaging for the candidate and government should they become public. The candidate is also usually asked to volunteer any embarrassing details in their personal lives before an appointment is finalized.

Depending on the severity of the what is found, the appointment could be killed.

The final decision usually rests with the prime minister who can decide to overlook the details because the person is an exemplary candidate, or give them a pass after hearing a reasonable explanation.

"Generally, security vetting and/or interviews would catch a situation like this," said Penny Collenette, who was Jean Chretien's director of appointments for four years and is now an adjunct law professor at the University of Ottawa.

"Obviously, this situation is personally disquieting, both for Julie Payette and for the prime minister. We don't have the full context or all the facts, but it is worth remembering that appointees always have a human dimension, separate and distinct from qualifications and accomplishments. We should not be surprised when that human dimension comes to light."

An online background check search shows that Payette was charged with second degree assault on Nov. 24 2011. The prosecutor formally dismissed the charge about two weeks later on Dec. 8, 2011.

In a statement issued through Rideau Hall, Payette declined to comment on the event.

“For family and personal reasons, I will not comment on these unfounded charges, of which I was immediately and completely cleared many years ago, and I hope that people will respect my private life.”

At the time, Payette was living with her then husband William "Billie" Flynn, a retired Air Force pilot who now is a Lockheed Martin test pilot for the F-35 fighter jet.

Payette and Flynn went through lengthy divorce proceedings that closed in late June when Payette withdrew a motion for child support, based on online Maryland court records. The records also show that a motion to seal the proceedings and accompanying affidavits was filed in Maryland court Tuesday.

Meanwhile, media reports surfaced late Wednesday that said Payette was also involved in a fatal accident in Maryland in July 2011, four months prior to the assault charge.

She reportedly struck and killed a pedestrian who had stepped off a curb into in front of Payette's car. The case was closed without charges in April 2012 following an eight-month police investigation.

Trudeau made Payette the next Governor General without the help of an ad hoc committee of experts.

Former prime minister Stephen Harper struck such a committee seven years ago when his government tapped David Johnston for the position. At the time, Harper had a minority government, meaning that whoever held the post of Governor General was essential to maintaining the stability of government.

The names of those on the selection committee weren't published until after Johnston's nomination, but Harper would go on to make the committee a permanent body, saying a process to ensure a non-partisan approach to viceregal appointments was important.

Trudeau was non-committal about maintaining the committee when asked about it last year, even though he is essentially using the same process to select Supreme Court justices and identify candidates for various federal appointments.

"I'm not going to change things just to reinvent the wheel," Trudeau said in a year-end interview with The Canadian Press about how he would select Johnston's successor.

"If there is a good process that we can improve by making (it) more open and transparent and more diverse, that I will probably do."

NDP ethics critic Nathan Cullen said the selection process for the Governor General worked out well in this case — he called Payette over-qualified for the job. But he warned the process could go off the rails in the future, citing the recent controversy around the government's nomination of Madeleine Meilleur to the role of official languages commissioner.

Meilleur withdrew her candidacy after heavy criticism for her Liberal connections and her donation of about $3000 to the federal Liberals since 2009.

"I have complete trust in Ms. Payette's ability to fulfil the role, but that doesn't mean the appointment process should be kept behind closed doors going forward."