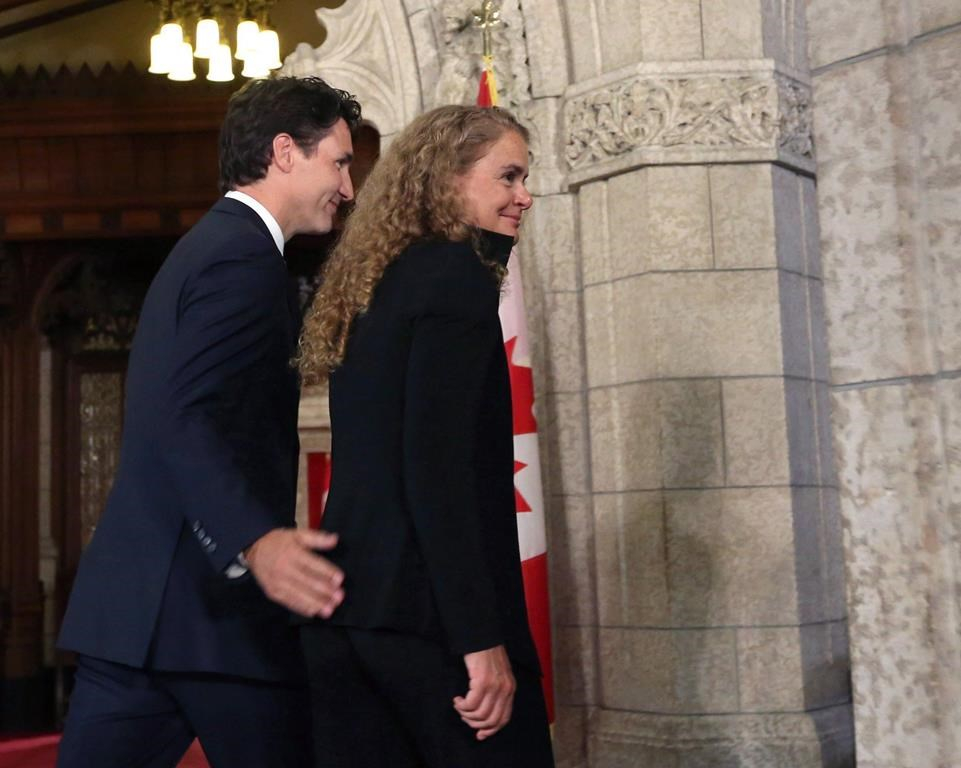 Prime Minister Justin Trudeau addressed the secretive process used to select the next Governor General for the first time on Thursday, saying that nothing came up during the vetting of Julie Payette that he saw as a stumbling block to her appointment.

Political appointees are normally run through a thorough vetting process designed to root out personal history that could be damaging for the candidate and government should they become public. Depending on what is found, the government may move on to another candidate.

Trudeau said that Payette went through the same check as other high-profile political appointees.

"The vetting process is deep and extensive and raised absolutely no issues that would prevent her from being Governor General. She will make an extraordinary Governor General," Trudeau said at an event in Barrie, Ont.

He didn't say if the check turned up two incidents revealed this week: a dismissed charge of second-degree assault when she lived in Maryland in 2011 — Payette has called the assault charge "unfounded", noting that she was "immediately cleared" — and a fatal car accident in which Payette was not found at fault.

Nor did he say if he talked with Payette about either incident.

"Obviously, our heart goes out to the family affected by this tragic accident. It was a terrible and tragic thing and we know that Mme. Payette actually personally reached out to share her condolences with the family subsequent to the accident," Trudeau said.

Trudeau said his discussions with Payette revolved around her vision for the country and what she would do in the role of Governor General.

Payette is one of Canada's most notable astronauts and public speakers, has received numerous accolades for her achievements, and speaks six languages. She will succeed Gov. Gen. David Johnston when the outgoing viceregal retires in the fall.

Conservative Leader Andrew Scheer said he had full trust in Payette, and backed Trudeau's decision to appoint her. But he added the prime minister should answers questions about the appointment process to help Canadians understand what went into his decision.

Johnston's name had been put forward by a committee struck by former prime minister Stephen Harper. Trudeau decided to appoint Payette without the same expert committee, so how her name came up remains unclear.

Reports of the fatal car accident added a new dimension Thursday to the questions Trudeau has faced all week about Payette, initially focused on his thoughts about the dismissed assault charge, given his previous comments condemning harassment, bullying and violence of any kind.

An online background check search shows that Payette was charged with second degree assault on Nov. 24, 2011. The prosecutor formally dismissed the charge about two weeks later.

In a statement issued through Rideau Hall this week, Payette declined to comment.

“For family and personal reasons, I will not comment on these unfounded charges, of which I was immediately and completely cleared many years ago, and I hope that people will respect my private life.”

In July 2011, Payette was involved in a fatal car accident that killed a 55-year-old woman, Theresa Agnes Potts. Accident reports provided by the St. Mary's County sheriff's department show that Payette had a green light when Potts ran across the intersection with her head down and likely didn't see Payette's Volkswagen Touareg before the accident.

A police investigation found Payette tried to brake and swerve out of the way, but didn't have enough time to avoid a collision. She was not on a phone at the time.

Potts' sister told investigators that the victim, who was on her way to an Alcoholics Anonymous meeting, likely didn't see Payette's car because Potts had an eye condition that impaired her vision in one eye and was blind in the other. Potts' sister told an officer the incident was "such a tragic accident."

At the time, Payette was living with her then husband William "Billie" Flynn, a retired Air Force pilot who now is a Lockheed Martin test pilot for the F-35 fighter jet.