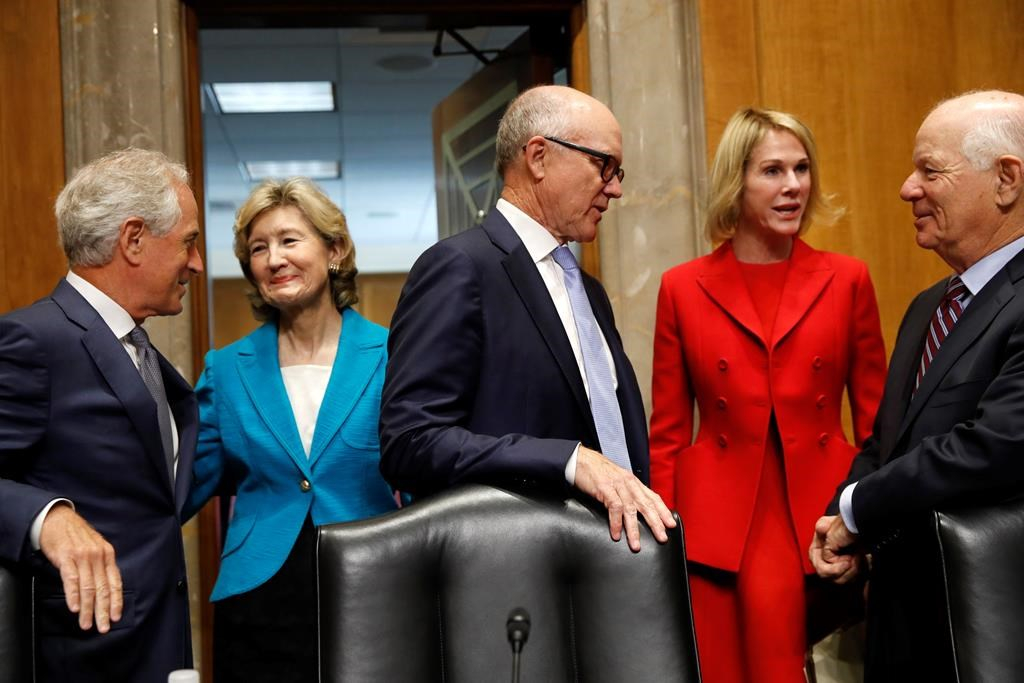 Sen. Bob Corker speaks with Kay Bailey Hutchison, while Woody Johnson speaks with Kelly Knight Craft and Sen. Ben Cardin, at the start of a Senate Foreign Relations Committee hearing on their nominations on July 20, 2017. Photo by The Associated Press
Previous story
Next story

President Donald Trump's choice to serve as the next ambassador to Canada said she will work hard to maintain — and improve — the strong economic relationship between both countries during her time in Ottawa.

"I will work tirelessly to further enhance our strong economic partnership — the most extensive and integrated economic relationship of any two nations in the world," Kelly Knight Craft said Thursday during her Senate confirmation hearing in Washington, D.C.

"I believe we can do better," she added.

"If confirmed, I will seek new opportunities to foster further growth to create more jobs for both countries, while promoting free and fair trade to ensure that American businesses and workers can compete on a level playing field."

The Trump administration wants to have its ambassador in Canada quickly, since negotiations for the new North American Free Trade Agreement are set to begin next month.

Knight Craft did not divulge many other details about the role she expects to play in the NAFTA talks, except to say that she will work closely with U.S. Trade Representative Robert Lighthizer and U.S. Commerce Secretary Wilbur Ross on advancing American priorities on the file.

Later on, when asked to share her plans for promoting U.S. exports to Canada, Knight Craft mentioned softwood lumber, dairy and poultry as areas where she would direct some of her efforts.

Knight Craft, who would be the first woman to serve as U.S. ambassador to Canada, said she would also work to advance shared goals on energy security, which she mentioned is linked to the environment.

"I will also work to advance our shared environmental goals, stewardship of our common watersheds, land mass, wildlife, farm life and the air we breath, from coast to coast to coast, as the Canadians say," she said.

Two other questions Knight Craft received during the hearings? Queries about years-old results of college basketball games in her home state of Kentucky.

Along with Knight Craft, Trump's picks for the NATO and U.K. posts were before the U.S. Senate foreign relations committee Thursday.

Each were asked by Sen. Bob Menendez, a Democrat from New Jersey, whether they believed Russia had tried to interfere in the 2016 U.S. presidential election.

"I believe, just from reading the material that everyone has had the opportunity to read that it looks as if yes," Knight Craft said. "I would have to investigate this further, or learn more . . . but I do believe, yes."

Senators devoted much more time to grilling Kay Bailey Hutchison, Trump's choice to represent the U.S. at NATO. Trump had said during the campaign that he believed the military alliance is obsolete, and the former Republican senator from Texas was asked directly for her view.

She was also asked whether she is unequivocal in her commitment to Article 5 — the self-defence clause that means an attack on one member of the alliance generates a response by all.

"NATO is not obsolete," said Hutchison, who noted Trump had come around to that view.

"I think the president realized immediately that it is an important and successful alliance," said Hutchison, who also said she is committed to Article 5.

"Your role in reasserting that will be very important," Menendez said.

Knight Craft said she also valued the partnership Canada has with the U.S. in Norad and NATO.

"The United States is fortunate to have a neighbour that shares a strong commitment to democratic values and works tirelessly to promote peace, prosperity and human rights around the world," she said.

Knight Craft is a well-connected political donor and philanthropist who is married to billionaire Joe Craft, who is the president and CEO of Alliance Resource Partners L.P., one of the biggest coal producers in the eastern U.S.

The U.S. ambassador post in Canada has been vacant since former envoy Bruce Heyman stepped down after Trump's election.